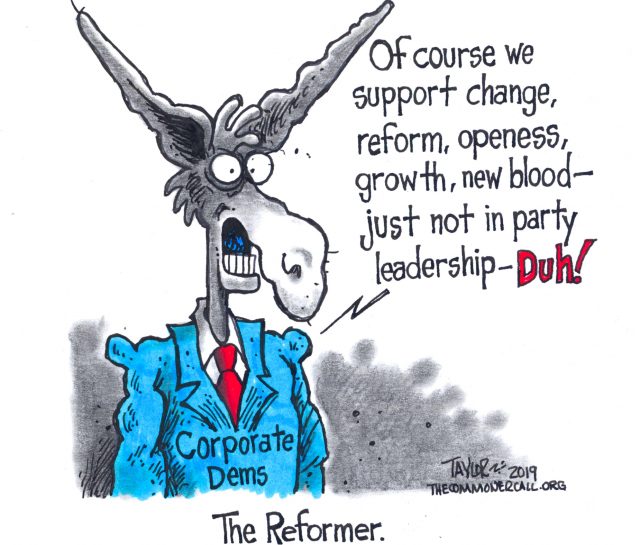 “Progressive challengers like Marie Newman will see more of this cronyism,” said Barrow, “but the progressive grassroots will have their backs.”

The Democratic establishment is already taking steps to stop insurgent progressive challengers to the party’s incumbents.

Marie Newman, who is challenging Rep. Dan Lipinski (D-Ill.) in the 2020 primary for the Illinois 3rd District, told Politico on Friday that a number of vendors have already dropped out of her campaign—the direct result of a rule put in place by the Democratic Congressional Campaign Committee (DCCC) banning consultants and other campaign mechanics from working with anyone running against a sitting Democrat.

“I’ve had four consultants leave the campaign,” Newman said. “We’ve now had two mail firms say that they couldn’t work with us because of the DCCC issue, and then a [communications] group, a compliance group and several pollsters.”

“Consultants who planned to work with Newman said that the DCCC delivered the warning in the nicest terms possible—but that it was a very clear threat to their ability to do business with the DCCC.”

The DCCC seems set in its decision to enforce the directive. On Thursday, representatives from the DCCC met with members of progressive PAC Our Revolution to discuss the rule. Our Revolution delivered the committee a petition to rescind the rules with 30,000 signatures, but the DCCC is standing firm, an aide told Politico.

“The DCCC has worked to change how Washington works, increase transparency in politics, and be perfectly clear with all its partners about the standards it expects of them,” said the aide.

The Newman campaign, as Sarah Jones wrote in New York Magazine, is poised to test the limits of the DCCC rule:

“Newman’s nascent campaign has the potential to test outsider groups like Justice Democrats, alongside more established party partners like NARAL Pro-Choice America and EMILY’s List. Pro-choice organizations backed Newman against Lipinski in 2018, and could do so again in 2020.”

Lipinski’s record as a conservative, anti-abortion Democrat came in for criticism from NARAL president Ilyse Hogue.

“Dan Lipinski votes against women’s rights, LGBTQ rights and the Affordable Care Act, and the the DCCC is punishing his opponent, Marie Newman who stands up for all of those things,” Hogue said in a tweet.

The financial hit that Newman is taking may be acting as a warning, The Intercept reported Friday afternoon.

“This has been very expensive for my campaign,” Newman told The Intercept, “it’s cost time and money and effort and frustration, but we’re working through it.”

As Common Dreams has reported, the battle between progressives and the DCCC over challenges to incumbents has raged for over a month, beginning in late March when the DCCC issued its new rules on vendors.

Reaction at the time was swift from progressives, particularly Rep. Ayanna Pressley (D-Mass.), who unseated incumbent Mike Capuano in 2018 on the back of a left wing platform.

Capuano is now a lobbyist with Foley & Lardner.

“I believe fiercely in the potential of our party, but we cannot credibly lay claim to prioritizing diversity and inclusion when institutions like the DCCC implement policies that threaten to silence new voices and historically marginalized communities,” Pressley said in a series of tweets on March 30.

“The lesson of 2018 is that our party is made stronger by the inclusion of diverse, disruptive candidates and vendors who bring different perspectives and experiences,” Pressley added.

That’s the message that progressives are embracing, some by starting an alternative campaign infrastructure meant to challenge the DCCC ban.

Members of the coalition were unsparing in their criticism of the DCCC Friday.

“By putting the protection of right-wing coddling incumbents ahead of our shared progressive values, the DCCC not only hurts the clarity of Democrats’ messaging heading into 2020—they risk our chances of holding the House, winning the Senate, and retaking the White House,” said Democracy For America Chair Charles Chamberlain.

Progressive Change Committee’s Marissa Barrow said that Newman might have some stress from the DCCC, but that she could rely on her friends in the party’s left wing base.

“Progressive challengers like Marie Newman will see more of this cronyism,” said Barrow, “but the progressive grassroots will have their backs.”

If anything, the establishment’s argument is the idealistic one, and Sanders’ is the pragmatic one.

In a crowded Democratic presidential primary field, there is one candidate who has drawn sustained opposition from party elites: Vermont’s Senator Bernie Sanders. The New York Times reports that major donors, party operatives, senior lawmakers and rival candidate and South Bend Mayor Pete Buttigieg have been attending private meetings where they discuss, among other things, how to prevent a Sanders nomination.

One explanation for why a party would try to stop the ascendancy of a certain candidate is electability. But that explanation is weak: Sanders has maintained high national favorability ratings, and is outperforming the incumbent Republican, Donald Trump, in polling.

In the eyes of the Democratic establishment, courting big dollars is the only way to stay politically competitive – and besides, corporations and wealthy individuals are major stakeholders in society, so why shouldn’t they get a major say over policy?

Another explanation would be that the dispute is interpersonal in nature. A dramatic New York Times anecdote noted that Sanders’s campaign manager, Faiz Shakir, was once punched or shoved, depending on whose story you believe, by the then Hillary Clinton aide Neera Tanden during a dispute in 2008. Tanden is a known longtime critic of Sanders and the president of the Center for American Progress (Cap), a liberal thinktank that came under fire from Sanders when its weblog ThinkProgress produced a video drawing attention to his wealth.

But is this just about residual bad blood between Clinton and Sanders factions?

I don’t think so. Between 2009 and 2012, I worked for both Shakir and Tanden at the Center for American Progress. Shakir was the editor-in-chief of ThinkProgress at the time and we both worked under Tanden.

Shakir and Tanden frequently clashed during my time there, but not a single one of their disputes was about anything personal. Instead, they argued about the role of money in politics.

Although Cap is a thinktank that produces policy papers – many of which are commendable – it is also serves as an important political unit allied to the Democratic party. It promotes its policy stances to Democratic party politicians and works to get its staff hired into Democratic administrations. But it does so in a climate where big donors – banks, healthcare firms and foreign governments make up its donor rolls – frequently pressured it to adopt certain stances.

As one example, stories I reported for the Intercept showed that the UAE paid Cap $2.5m as its senior staff helped them lobby the Trump administration and influence the wider DC policy community.

During my time at the thinktank, Shakir repeatedly and vigorously pushed back at attempts by Cap’s donors to influence ThinkProgress’s content, while Tanden argued that this was simply the cost of doing business in Washington. …