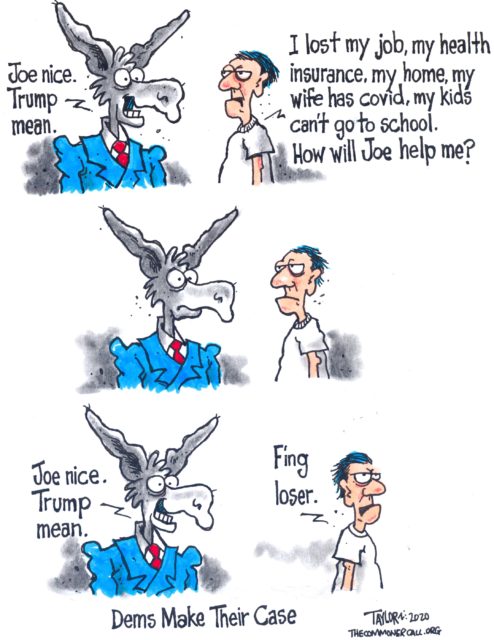 I missed the balloons, the streamers, the strutting around the stage. I missed the lines carefully calibrated for applause and the veering off-script. I missed the theatricality. But the revolution is now streaming. The pandemic meant the Democratic convention was televised online, in four nights of two-hour party political broadcasts.

There was no pizza big enough for this endurance test. The convention felt like a charity marathon without an audience, punctuated with unfunny comedy and sob stories. Tear-jerking speeches informed us that Joe Biden is a nice man. John Legend supplied the light entertainment, John Lewis the heroic archive. What a mishmash it all was.

The US is standing on the faultline of a pandemic, a deepening recession and a racial divide, but the convention still subjected us to endless speeches about how great and good the country is. Though all nations sing their own praises, the US tends to do so for longer and with far bigger production values than others.

I’ll admit it: I wanted the Democrats not to “go high”, as Michelle Obama says, but to go low – to be on the attack. After four years, they should understand that Trump will go lower yet. And that can’t be met with hugs and empathy.

Of course, I am biased: I’ve been to actual conventions and rallies in the US, and am familiar with their grandiosity, their pomp, and their insane security details. You go for the parties and the gossip that, as with Britain’s party conferences, always takes place offstage: the plots, the snubs, the affairs, the desperation. On stage, everything is designed to look good on TV – a political version of Glastonbury.

During the 2008 election campaign, a friend and I were in Kentucky and were given special seats at a John McCain rally. My friend happens to be black – a fact not lost on the cameras, which homed in on McCain’s “diverse” supporters. The mostly white crowd screamed “Drill, baby, drill” at the mention of Sarah Palin’s name.

This year, the Democratic convention tried to make up for an absent audience with slick production and fake unity. Everyone appeared to love Biden, even those who didn’t before. Bernie Sanders’s speech indicated their friendship; support from rogue Republicans such as Colin Powell and Cindy McCain came as no great surprise. Bill Clinton made a speech, as did Hillary (you may have forgotten that Bernie’s supporters booed Hillary in 2016). We could have done without them, to be frank. If you’re trying to capture wavering voters who feel the Democrats represent the establishment, then the Clintons are its epitome.

Overall, two messages were key. The first? Vote. This is important, beyond everything. The other, which I grew tired of, was that Biden is a good guy while Donald Trump is bad. …

The DNC Handed The Mic Over To Women, But Shunned Progressive Women Like The Squad?

Why did the DNC deliberately omit progressive voices?

Sorry mansplainers, your time is running out. According to an analysis by the New York Times women got more speaking time than men during the Democratic National Convention this week.

The increase in female voices, the Times speculated, is “a signal of how the [Democratic] party’s power dynamics may be shifting” after a record 36 new women won House seats in the 2018 midterm election and Kamala Harris’s “trailblazing” VP nomination.

It’s important to celebrate progress. We should not underplay just how incredible it was to see a biracial Indian and black woman accept the nomination for vice-president of the United States. We should not forget how much work it took to get to this point. As Harris said in her powerful acceptance speech, generations of women paved the way for this. They “marched and fought – not just for their vote, but for a seat at the table.”

But while it’s important to celebrate progress, it’s also important to acknowledge that the Democratic party still doesn’t seem very keen on giving progressives a seat at the table. The DNC may have handed the mic over to women but there is one group of women they seem intent on shutting up: the Squad. Not a single one of the progressive young congresswomen who make up the Squad were asked to speak at the DNC.

What about Alexandria Ocasio-Cortez, you might ask? She spoke for a whole 60 seconds! She certainly did, but she wasn’t invited by the DNC, she was invited by Bernie Sanders. As AOC explained on Twitter, DNC rules require a roll call and nominations for every candidate that passes the delegate threshold. Sanders passed the threshold and AOC was asked to endorse him. Despite this being standard practice some parts of the media, including NBC, willfully misinterpreted it and cast Ocasio-Cortez as a troublemaker who had hijacked the convention. (AOC, of course, immediately called NBC out on this.)

Ocasio-Cortez is probably the most exciting politician of our time. She, along with the other members of the Squad, have inspired and energized young people and progressives around the world. They’ve helped to demystify politics. They’ve given people hope that we might see a more equitable future. Why were they shunned by the DNC? …

Sanders Reveals The Real Story On How The DNC Snubbed AOC