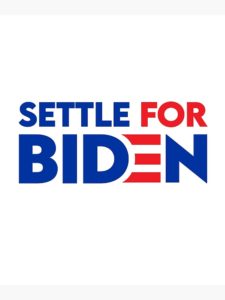 During the official roll call at the virtual Democratic National Convention on Tuesday, representatives from 57 states and territories declared their delegate totals for Bernie Sanders and Joe Biden, each from an iconic setting highlighting their region. Native American delegates from the Dakotas and New Mexico greeted viewers in their indigenous languages. African American delegates spoke from Black Lives Matter Plaza in Washington, DC and the Edmund Pettus Bridge in Selma, Alabama.

The sweeping celebration of the Democratic Party’s diversity, however, also highlighted the party’s fracture between its centrist establishment and its emerging progressive wings. Yes, all the delegations enthusiastically declared Joe Biden “the next president of the United States.” But, Bernie Sanders’ delegate total of 1,151, compared to Biden’s 3,558, indicates the persistence of a significant ideological divide.

He could pave the way for another Donald Trump victory in the “the most crucial election in human history.”

“Good evening, bienvenidos and thank you to everyone here today endeavoring towards a better, more just future for our country and our world,” AOC said, opening her pre-recorded, speaking slot for which she was allotted 60 seconds (she used 95 seconds). She continued, thanking the “mass people’s movement working to establish 21st century social, economic and human rights, including guaranteed healthcare, higher education, living wages and labor rights for all people in the United States…striving to recognize and repair the wounds of racial injustice, colonization, misogyny and homophobia and to propose and build reimagined systems of immigration and foreign policy that turn away from the violence and xenophobia of our past; a movement that realizes the unsustainable brutality of an economy that rewards explosive inequalities of wealth for the few at the expense of long-term stability for the many, and who organized a historic grassroots campaign to reclaim our democracy, in a time when millions of people in the United States are looking for deep, systemic solutions to our crises of mass evictions, unemployment, and lack of healthcare.”

Ady Barkan’s statement was also pre-recorded, for another reason: he is dying from ALS, amyotrophic lateral sclerosis. A Yale-trained Israeli-American lawyer and activist, Barkan was diagnosed in 2016 at the age of 32, suffering increasing nerve degeneration, muscle atrophy, and paralysis. He can no longer speak, so composes his speeches in advance, using a synthetic, computer voice.

“In the midst of a pandemic, nearly 100 million Americans do not have sufficient health insurance. And even good insurance does not cover essential needs like long-term care,” Barkan said. “Our loved ones are dying in unsafe nursing homes, our nurses are overwhelmed and unprotected, and our essential workers are treated as dispensable. In the richest country in history…we do not guarantee this most basic human right. Everyone living in America should get the healthcare they need, regardless of employment status or ability to pay.”

Ady Barkan advocated for Medicare-for-All without naming it, though he usually does, perhaps since Joe Biden has vowed to veto any Medicare-for-All bill that reaches his desk if he becomes president. Shortly after Barkan’s address aired, he tweeted, “We need to elect Joe Biden to take the next step towards Medicare For All. After November 4th? We’re going to put a bill on his desk.”

Will the Democratic Party spurn the demands of its younger and increasingly diverse progressive wing? They will try to.

This week, the Democratic National Committee quietly dropped its pledge to eliminate subsidies and tax breaks for the fossil fuel industry, saying it appeared in this year’s draft platform “in error”–despite appearing in the 2016 platform and being supported by both Biden and his running mate, Vice Presidential candidate Kamala Harris.

Then, the Biden campaign denounced respected Palestinian-American Muslim organizer Linda Sarsour, after she appeared on a livestream of a Muslim Delegates and Allies Assembly side-event to the DNC. Sarsour has publicly fought against racism, xenophobia, Islamophobia, and antisemitism. She also supports the Boycott-Divestment-Sanctions movement for Palestinian rights. A Biden spokesperson said Biden “obviously condemns her views and opposes BDS.”

Ady Barkan fired back on Twitter in solidarity: “I say this as a Jew and an Israeli citizen…the Biden campaign issued a vile and dishonest statement against my beloved sister Linda Sarsour, a fierce advocate for justice and freedom, and a leading antiracist and organizer against antisemitism. The Biden campaign must retract and apologize.”

If Joe Biden ignores, demoralizes or actively alienates his progressive base, he could pave the way for another Donald Trump victory, in what public intellectual Noam Chomsky has called “the most crucial election in human history.”

Cenk Uygur Of The Young Turks: Will Progressives Be Able To Move A Biden Admin?

“The minute Joe Biden is elected the protests, activism, and primaring anyone who is going to run in 2024 begins. It begins on Day One. No quarter given.”

Host and founder of The Young Turks, Cenk Uygur, highlights the “standout” moments of the DNC and where Democrats missed the mark.