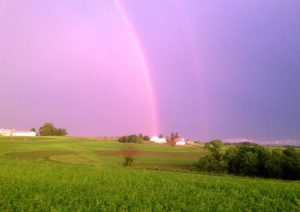 Despite some obvi­ous prob­lems, the indus­tri­al food sys­tem is a mar­vel of effi­cien­cy — until some­thing goes wrong.

The yel­low-brown com­post has been heaped into hills taller than the near­by bull­doz­ers. The piles don’t look like pigs, but that’s what they are. Pigs and woodchips.

It’s mid-May and thou­sands of hogs have been killed and tossed in a wood­chip­per on this farm field in Nobles Coun­ty, Min­neso­ta. They rep­re­sent but a frac­tion of the num­ber of ani­mals that have met such an end here in the third-high­est hog-pro­duc­ing state in the coun­try. The Min­neso­ta Depart­ment of Agri­cul­ture said on May 6 that at least 10,000 hogs were being slaugh­tered and dis­card­ed every day, but no one knows the real num­ber. The state set up the Nobles Coun­ty com­post site, but it’s not required to track all the killings due to a tech­ni­cal­i­ty, says Michael Cru­san, com­mu­ni­ca­tions direc­tor for the Min­neso­ta Board of Ani­mal Health. ​“There isn’t an ani­mal dis­ease issue,” he explains. ​“It’s just a depop­u­la­tion due to mar­ket conditions.”

While industrial farms have been thrown into chaos, local agriculture has proved to be a more resilient model.

“Mar­ket con­di­tions” does not mean every­one has enough to eat. In Min­neso­ta and across the coun­try, surg­ing need has over­whelmed food banks. Some super­mar­kets lim­it meat pur­chas­es to pre­vent shelves from becom­ing bare. In the Min­neapo­lis Star Tri­bune, one let­ter writer pleads for hunters to be allowed to butch­er the wast­ed hogs, to save at least some of the meat from the woodchipper.

“Mar­ket con­di­tions,” in this case, means meat pro­cess­ing plants, includ­ing the JBS pork plant in near­by Wor­thing­ton, have shut down because of Covid-19 out­breaks among work­ers. The Wor­thing­ton plant alone, which pre­vi­ous­ly processed 20,000 hogs a day, has been tied to more than 700 Covid-19 cas­es.

The assem­bly line of indus­tri­al food, how­ev­er, extends far beyond the pro­cess­ing plants. The clo­sures have left many indus­tri­al pig farm­ers, who raise and ship out hogs on a reg­i­ment­ed sched­ule, with nowhere to send their mar­ket-ready ani­mals. With the next batch of hogs ready to fill the cages behind them and no oth­er way to get the meat to hun­gry peo­ple, the farm­ers have lit­tle choice but to grind the ani­mals into compost.