For the story on Commoner Call cartoons and photos (and terms of use), scroll to the bottom of this page.

Original cartoons, illustrations and photos by Mark L. Taylor posted in The Commoner Call and the Lines of Resistance are open source and free to use by progressive groups, publications and other worthy progressive causes. The artwork may not be altered, edited or relabeled without approval of the artist. A link to www.thecommonercall.org must be posted with each piece of art or photo used.

Features: Straight From The Commoner Sketchpad:

Features: Straight From The Commoner Camera:

For the Latest Resistance News and Views:
SEE ALL ARTICLES HERE

Editorial Cartooning:
Illustrating Opposition to Power Across the Centuries

“The smallest evil, if neglected, will reach the greatest proportions.”

From the beginning of written language and experiments with imagery, humans have been doing political art. Wall graffiti from ancient Pompeii included verbal and graphic complaints and caricatures of local politicians, crooked merchants and the inequities of daily life. From a fire blackened stick, to brush, to brush, to pencil and pen, to spray paint and now iPad, humans have wielded what ever tools of self-expression were at hand to challenge corrupt autocracy, mock official pretension, ridicule political pomposity and raise a ruckus.

While empires come and go and leaders rise to the headlines and disappear a day after their obituary the themes of discontent are consistent across the bumpy, twisting arc of humanity. Given that power usually corrupts it is also safe to say political cartoonists, humorists and satirists will always have plenty of material to work with. In fact, politicians usually serve up a full platter of material for the cartoonist every morning.

You can check out some other background I have posted on American political cartooning on the “Inky Trail” page.

I began my political cartooning career at The Walworth Times (WI) weekly newspaper. I was hired to paste up ads and news copy and process film in the dark room in the pre-computer scissors-and-glue pot days of newspaper layout. The editor, Fred Noer Sr., knew I was interested in cartooning and generously offered me $10 for a weekly cartoon on pretty much any subject I wanted to address, which gave me the material for the beginning of a portfolio of published work.

Every three or four months I would take recent work to Bill Sanders, the long-time cartoonist at the old (generally progressive) Milwaukee Journal for critiquing. Tom Curtis, the cartoonist at the (generally reactionary) Milwaukee Sentinel, would join us in Bill’s office and the two of them would give me a no-holds-barred critique. It was not a gentle experience, but just what I needed. After about a year of this, Bill one day positioned a half-dozen small cartoons I had done for a recent freelance project in the middle of his drawing table and announced: “Those are your first professional cartoons.”

A Nobel Prize wouldn’t trigger a feeling anything like what Bill gave me that day.

One day Fred Noer called me out of the layout room into his office to say he had the editor of The Albuquerque Tribune on the phone and wanted to know if I was interested in a full-time cartooning gig at a daily newspaper. Within a couple months I was relocated to New Mexico and publishing six editorial page cartoons a week and doing other illustration work. My work had some small syndication and I would do occasional freelance work, including for the National Wildlife Federation and Ralph Nader’s Public Citizen. (Ralph once told a group we were with that I was, “The best pro bono cartoonist in America!” Still can’t figure out if that was a compliment or not!)

My cartooning career came to a bruising end when the work I was doing on Ronald Reagan’s Central American dirty wars began to be rejected. After several years of success and good relations with my editors, cartoon after cartoon was rejected – often brutally. Cartooning legend Bill Maudlin had grown up in New Mexico and recently returned to semi-retirement in Santa Fe. I called him up one day to share my tale and he invited me to his home for a little feedback. He said he had been following my work and wasn’t surprised I was on the outs with the editor and publisher. I learned from him that there were many old Hispanic families in New Mexico with hidden family and business ties to Central American oligarchs and, no doubt, my spilling so much ink on Reagan and U.S. crimes in Central America had pissed off a few influential people.

I was exiled from the editorial page soon after and shifted my journalistic focus to outdoor and environmental reporting. While I did occasional illustration work my efforts turned to writing and photography. In 1994 I left journalism for a new career without a glance over my shoulder.

The one direct benefit I have received from Gov. Scott “Bucky Weasel” Walker is he got me cartooning again. As with the long ago greedy plutocrats and self-absorbed sociopaths of ancient Pompeii with whom “Bucky Weasel” shares moral genetics, the material just keeps arriving with every day’s news cycle. Every week there are more ideas than time to draw. 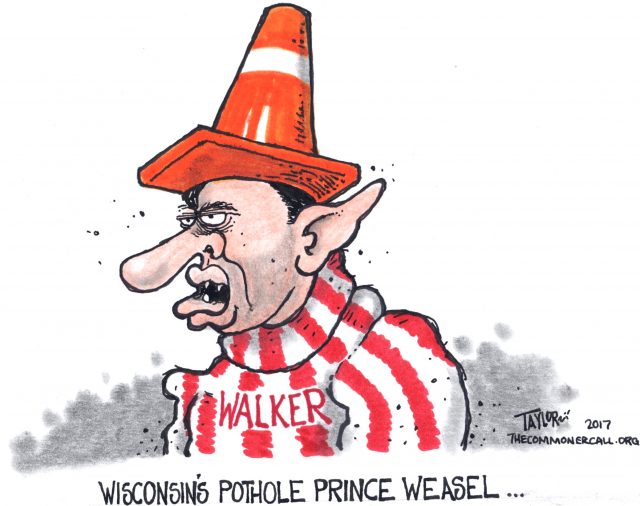 The cartoons I post to The Commoner Call are tools for activists. Progressive groups are free to use the artwork for newsletters, flyers, posters, websites or in any way they can be used to promote humane, democratic progressive values. Abut a year ago a colleague forwarded a photo of one of The Commoner Call cartoons that had been adapted to a protest sign in Paris. That’s just the kind of service they are provided for.

The one request I have is that the cartoons may not be altered, relabeled or edited without permission. If in doubt, contact me and we can probably work something out.

I have recently added an archive of progressive themed photographs that are, likewise, available for free use.

Feel free to put my work to work in your community efforts. 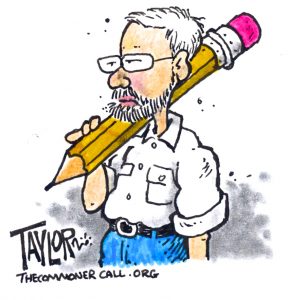 Original cartoons, illustrations and photos by Mark L. Taylor posted in The Commoner Call and the Lines of Resistance are open source and free to use by progressive groups, publications and other worthy progressive causes. The artwork may not be altered, edited or relabeled without approval of the artist. A link to www.thecommonercall.org must be posted with each piece of art or photo used.

“The Commoner Call” is a free educational offering from the RoundRiver Institute LLC and is not receiving any financial support.

Please Note: This message may contain copyrighted material the use of which has not always been specifically authorized by the copyright owner. We are making such material available in our efforts to advance understanding of environmental, political, human rights, economic, democracy, scientific, and social justice issues, etc. We believe this constitutes a ‘fair use’ of any such copyrighted material as provided for in section 107 of the US Copyright Law. In accordance with Title 17 U.S.C. Section 107, the material in this message is distributed without profit to those who have expressed a prior interest in receiving the included information for research and educational purposes.

“The Most heroic word in all languages is Revolution.”