More than any other single individual, crusading cartoonist Thomas Nast was credited with bringing down the corrupt regime of Tammany Hall’s Boss Tweed.

“I don’t care a straw for your newspaper articles; my constituents don’t know how to read, but they can’t help seeing them damned pictures.”

From the earliest days of America political cartoons have played a colorful and powerful role in American political commentary. Even Benjamin Franklin tried his hand at cartooning, penning the famous “Join Or Die” serpent cartoon calling for unity of the colonies during the American revolution. A century later it was a cartoonist who brought down William “Boss” Tweed, one of the most corrupt politicians in the old Tammany Hall days of New York City. Tweed, whose ring of City Hall cronies and appointees looted New York City of millions in the late 1870’s, was the poster boy of Gilded Age urban corruption. One of the heroes to stand against Boss Tweed – who even turned down a bribe to stop his pen – was cartoonist Thomas Nast.

Nast relentlessly hammered away at Tweed and his crew in the pages of Harper’s Weekly, which prompted the quote above when Tweed bitterly complained to the editors of Harper’s. With his empire of fraud and corruption collapsing around him, Tweed later fled the country with investigators snapping at his heels. In a delicious twist of irony, Tweed was eventually captured on the run after someone in Cuba recognized him … from one of Nast’s cartoons.

The party in power is the enemy

When practiced at its best, political cartooning is a bit of a dark art. Whether wielded as a club or a laser beam, good political cartoons go for the jugular. Leave the fine points to the bloggers and pundits in the parlor; the political cartoonists – the good ones at least – are in the barroom brawling.

No prisoners are taken.

Many political cartoonists plied the trade and battled official corruption and political mendacity from town square to Pennsylvania Avenue throughout the 20th century. The famous Herblock of The Washington Post etched the shadowy image of Richard Nixon’s dark soul into the American consciousness. Legend Bill Mauldin drew the truth from the battlefields of WW II with his Willie and Joe characters in Stars and Stripes and on into the domestic political battlefields through the 1980’s.

With a devastatingly sophisticated use of caricature and razor sharp metaphor, Australian transplant Pat Oliphant opened up a whole new school of the art form in the 1960’s, influencing a generation of cartoonists. Like him or loathe him, the one thing everybody could agree on, you always knew where Oliphant stood on a subject.

“It makes no difference whether I am right or wrong,” Oliphant said in a rollicking good 1977 profile. “I feel quite positive about being negative. The party in power has to be the enemy, and it is my job to search out the flaws. Mine is an unfair art. …The editorial writers feel duty-bound to point out all sides of the question, to weigh and balance, to present the facts. But in the great negative art of cartooning, you’re only going for the Achilles’ heel.”

Now well into his 80’s Oliphant continues to turn out cartoons that are too bold for many newspapers. A critic once said of him: “If Pat Oliphant couldn’t draw, he’d be an assassin.”

In the world of political cartooning that is a compliment.

Despite the sputtering existence of daily newspapers and periodicals the art of political cartooning remains a powerful tool to memorably – sometimes brutally – slice to the core of complex political issues and opaque personalities in a way that sticks in the mind and splits open the truth. In that spirit, Mark L. Taylor, a former professional political cartoonist with the now defunct The Albuquerque Tribune, who has also done free-lance work for a number of other progressive groups and publications, including Ralph Nader’s Public Citizen and the National Wildlife Federation, has dusted off his drawing board, sharpened the pencils and is turning out political cartoons in support of progressive reform and resistance to the rising tide of American brand fascism. His work is featured in The Commoner Call and available for free use by progressive groups and activists in newsletters, websites, flyers, banners or any other means of communication. New cartoons will be continually added to The Commoner Call’s“Lines of Resistance” archive of political cartooning, art and illustration.

Check back for new Commoner Call cartoons and editorial images and think of ways you can use these images to further much needed social, political and economic justice in the United States. Cartoons can be used for free for non-profit causes with a link to www.thecommonercall.org . The cartoons may not be edited, relabled, reworded or combined with other images without the direct permission of the artist. You can reach cartoonist Mark L. Taylor at: mark@thecommonercall.org 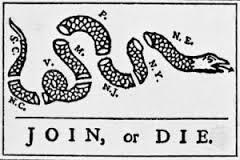 Ben Franklin’s call to patriots is as timely today as it was when first published in the heat and personal danger of the American Revolution.