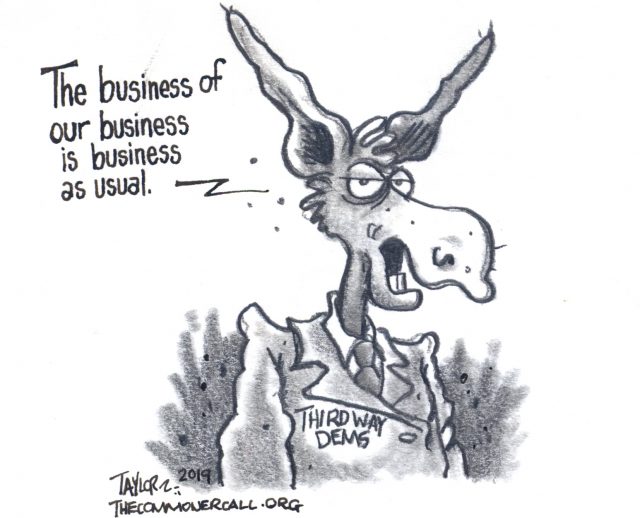 In our tribalized politics, war is peace, freedom is slavery and dissent is disloyalty.

“This is a moment of apolitical crises — that is, crises that aren’t just manufactured by and confined to the political soundstage, but instead life-and-death, out-here-in-the-real-world emergencies in the realms of money, biology and ecology. We’re facing an economic and environmental collapse in the midst of a lethal pandemic. And we’re going through this cataclysm with a legislative branch controlled by right-wing senators, a court system that rubber stamps corporate demands and an authoritarian president whose major crisis-management experience was firing people on The Apprentice.

“And yet, in the middle of this five-alarm garbage fire, we’re asked to white-knuckle it and feign excitement for an opposition party machine run by insiders, lobbyists and careerists who keep letting us know that they think campaign promises are distinct from policy. In so many ways, they keep telling us over and again that the most we can hope for is, in the words of the nominee himself, that “nothing would fundamentally change.”

“Failure to match the rah-rah spirit of the Blue Team, refusal to get psyched for the charade, asking questions about inconvenient facts — it all means you must be on the Red Team and are being paid in rubles, comrade.”

“There has certainly been a lot of inspiring talk about the health care emergency and the climate crisis and oligarchy, but the party platform says it all.

“During a recession that has resulted in millions losing health insurance, Medicare for All is nowhere to be found in the platform. During climate-intensified wildfires, inland hurricanes and — yes, really — fire tornados, the platform’s section on ending fossil fuel subsidies was removed. The lobbyists who run the DNC also killed an initiative to reduce the influence of corporate money on the party. Meanwhile, Joe Biden himself rolled out a whole package of legislative promises, and then told his Wall Street donors that, in fact, changing corporate behavior is “not going to require legislation” and he won’t be proposing any. Please clap.

“The worst part is that dispassionately recounting any of these facts obviously proves you love Trump and Putin — at least that’s what you’ll be told if you dare even whisper this. In our tribalized politics, war is peace, freedom is slavery and dissent is disloyalty. Failure to match the rah-rah spirit of the Blue Team, refusal to get psyched for the charade, asking questions about inconvenient facts — it all means you must be on the Red Team and are being paid in rubles, comrade.

“As an electoral strategy, this kind of vote shaming and dissent suppression doesn’t have a winning track record. It is both immoral and bad politics. There must be a better strategy — and for the love of god, with polls now tightening, the world needs the Democrats to find one fast, because another Trump term is unthinkable.”

— David Sirota, You Don’t Have To Be Excited