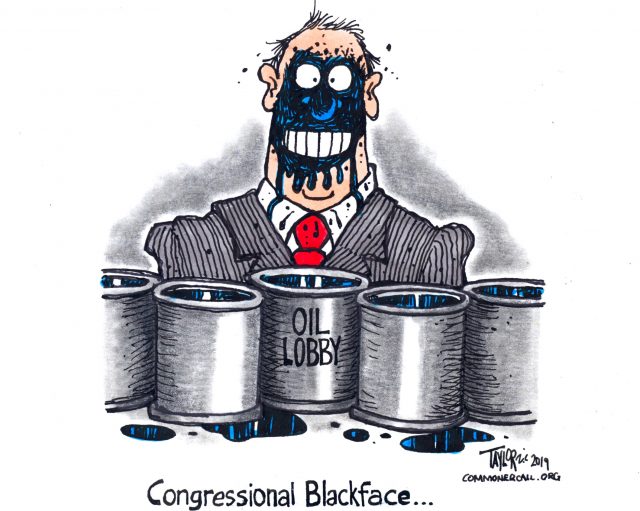 The House Committee on Energy and Commerce oversees environmental protection, clean air, climate change, energy policy, and drinking water safety. But many of its members appear heavily conflicted: nearly half are personally invested in companies that produce, distribute, or facilitate the distribution of oil, gas, and coal—fossil fuels that are among the biggest threats to the health of the planet and the future of the human species.

A Sludge analysis of financial documents has found that 22 of the 55 members of the 116th Congress’ Energy and Commerce Committee have disclosed investments in fossil fuel companies such as Exxon Mobil, Southern Company, and Chevron worth as much as $15.6 million. The actual total could be even higher since some investments are reported without a maximum value specified. In addition to hastening climate change, some of these companies are among the world’s biggest polluters.

Representatives from both major parties are heavily invested in the dirty energy industry. Sludge previously reported that several Democrats on the Energy and Environment subcommittees are invested in fossil fuels, as is Rep. Kathy Castor (D-Fla.), the chair of the new Select Committee on the Climate Crisis.

In addition to their personal investments in fossil fuel companies, many Energy and Commerce members have accepted significant sums of campaign donations from the energy industry.

Of the Energy Committee members, Republican Montana Rep. Greg Gianforte, one of the wealthiest members of Congress, has by far the largest stake in fossil fuels—at least $5.6 million in domestic and international companies through his and his wife’s revocable trusts—followed by Texas Republican Bill Flores ($2.7 million) and Democratic Massachusetts Rep. Joe Kennedy (up to $2.2 million).

The 22 representatives combined to own potentially over $1 million in each of five companies or funds: Salient MLP Fund, Exxon Mobil, Southern Company, Chevron, and Tortoise Energy Infrastructure Corporation. See below for the total amounts for all companies and funds identified by Sludge. [Follow link below.]

According to multiple studies, the Earth is careening towards environmental catastrophe, and only drastic efforts to stem climate change over the next 12 years can slow down its dangerous effects. The Energy and Commerce Subcommittee on Energy has jurisdiction over fossil and renewable energy, energy conservation, utilities, and “all laws, programs, and government activities affecting energy matters.” As its members write laws governing the energy industry, they own as much as $3.8 million worth of investments in oil and gas firms.

The Energy and Commerce Subcommittee on Environment and Climate Change oversees “all matters related to soil, air, and water contamination” including the regulation of oil, gas, and coal combustion waste, the Clean Air Act, and the underground injection of fluids during fracking. Yet three of its members together own between $1.2 and $1.7 million worth of stock in fossil fuel companies.

Three members of the environment and climate change subcommittee are invested in fossil fuels: Debbie Dingell (D-Mich.), McNerney, and Peters.

Many ethics experts believe that members of Congress should recuse themselves from working on legislation that could impact their personal investments. In the Senate, Democrats Jeff Merkley (Ore.) and Sherrod Brown (Ohio) proposed a bill that would ban members from buying or selling stocks while in office, although no such proposal has been introduced in the House.

Sometimes it’s even difficult to figure out which investments members of Congress own.  …

Read the Rest and Charts of Member Investments in Fossil Fuels

Beware Of THESE Democratic Candidates

Wall Street executives are desperate for a centrist Democrat to be the party’s nominee in 2020. Cenk Uygur, Killer Mike, and Ana Kasparian, hosts of The Young Turks, break it down.