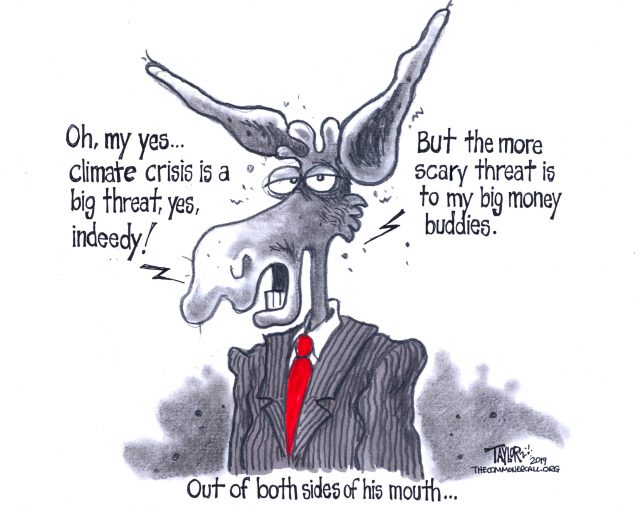 The Democrats are afraid to treat climate change as the crisis it is. We must make them afraid not to.

Imagine for a second that the scientific community has just told the world in no uncertain terms there is a meteor headed to Earth that will almost certainly wipe out most, if not all, life on the planet.

One of the major political parties in the US is skeptical. They cast aspersions on the scientists, call the whole thing a hoax, repeat meteor-denying propaganda even as the enormous space rock becomes more visible in the sky, and, rather than working to try to stop the meteor from hitting Earth or making preparations to mitigate its impact, they actually implement policies that hasten its arrival and increase its eventual destruction.

The other party attracts the support of anti-meteor activists, groups, and philanthropists. When pressed, its members affirm their belief in the existence of the meteor. They defend the beleaguered, increasingly panicked scientists from attacks. They criticize the other party’s denial of the meteor’s obvious existence.

But for all their talk, they don’t really seem like they believe what they’re saying. They roll their eyes at anti-meteor campaigners when no one’s looking. They continue to take money from industries profiting in the short-term from the meteor’s arrival. They hardly talk about the meteor unless pressed, and they balk at implementing the kinds of radical policies needed to deal with the meteor. And they frequently team up with the other party to push through policies harmful to anti-meteor efforts.

Sure, only one of these parties continues to deny outright that the meteor isn’t coming. But when it comes down to the actual, material outcomes, the difference isn’t that great.

It’s a disgrace that even Democrats who are considered progressive and reside in safe blue districts treat climate change as a boutique side issue, or even continue to take money from fossil-fuel companies.

This hypothetical state of affairs is essentially the situation in the United States when it comes to the rapidly approaching climate crisis. The Democratic Party is ostensibly the anti–climate denial party. And yet, despite a massive report released only a few months ago warning that the world has an alarmingly short amount of time to make the radical changes needed to stave off permanent environmental destruction, the Democrats tread water on the issue.

Before the midterms, the Democrats weren’t even planning to do anything about the matter. They had to be dragged kicking and screaming by activists and an insurgent socialist politician to make it a priority.

Sure, House speaker Nancy Pelosi will refer to climate change as “the existential threat of our time.” But even once activists pushed her to put it on the post-midterm agenda, Pelosi declined to establish a select committee with the kind of broad powers activists want, such as the authority to issue subpoenas (something the previous House select climate committee could do, when the crisis was less urgent) or even, flabbergastingly, to draft legislation.

The politician tasked with heading this committee has some of her wealth invested in the fossil-fuel industry, and balked at the idea of barring politicians who have taken fossil-fuel donations from sitting on it, arguing it would violate the First Amendment. After New York congresswoman Alexandria Ocasio-Cortez floated the idea of a 70 percent marginal tax rate on the rich to pay for climate policies (which, considering the scale of what must be done, is a moderate position), the House’s number two Democrat, Steny Hoyer, literally laughed at the idea before saying he didn’t support it. The Democratic chairman of the House Energy and Commerce Committee recently said that while the US “should take a look at” going carbon-free or carbon-neutral by 2030, it “may not be technologically or politically feasible.”

Does this sound like a party that genuinely believes in the “existential threat” of climate change? …

The arthretic, scilrotic, dsssicated, gas bag establishment of the corporate wing of the democratic party just doesn’t know what the hell to do with the new 29 year-old congresswoman. In their dark and nicely carpeted little corners of corporate boardrooms New York corporate dems plot a primary challenge of the new representative.

AOC supporters at Justice Democrats say — it’s all good — bring it on, fellas!