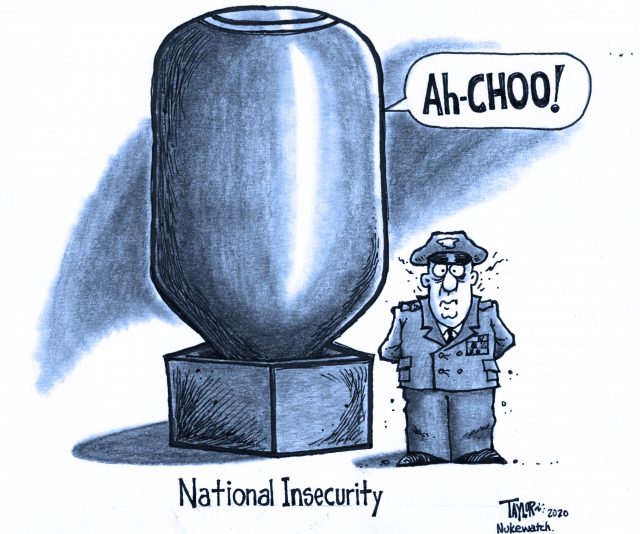 Our ever-mobile military has become a significant conduit of its spread, both domestically and abroad.

American military personnel are getting sick in significant numbers in the midst of the ongoing pandemic. As The New York Times reported in a piece buried in the back pages of its July 21st edition, “The infection rate in the services has tripled over the past six weeks as the United States military has emerged as a potential source of transmission both domestically and abroad.”

Indeed, the military is sick and I think of it as both a personal and an imperial disaster.

As the wife of a naval officer, I bear witness to the unexpected ways that disasters of all sorts play out among military families and lately I’ve been bracing for the Covid-19 version of just such a disaster. Normally, for my husband and me, the stressors are relatively mild. After all, between us we have well-paid jobs, two healthy children, and supportive family and friends, all of which allow us to weather the difficulties of military life fairly smoothly. In our 10 years together, however, over two submarine assignments and five moves, we’ve dealt with unpredictable months-long deployments, uncertainty about when I will next be left to care for our children alone, and periods of 16-hour workdays for my spouse that strained us both, not to speak of his surviving a major submarine accident.

Typically in these years, top Pentagon officials and the high command are prioritizing the maintenance of empire at the expense of protecting the very bodies that make up the armed services (not to speak of those inhabitants of other countries living near our hundreds of global garrisons).

You would think that, as my husband enters his third year of “shore duty” as a Pentagon staffer, the immediate dangers of military service would finally be negligible. No such luck. Since around mid-June, as President Trump searched for scapegoats like the World Health Organization for his own Covid-19 ineptitude and his concern over what rising infection rates could mean for his approval ratings, he decided that it was time to push this country to “reopen.”

As it turned out, that wouldn’t just be a disaster for states from Florida to California, but also meant that the Pentagon resumed operations at about 80% capacity. So, after a brief reprieve, my spouse is now required to report to his office four days a week for eight-hour workdays in a poorly ventilated, crowded hive of cubicles where people neither consistently mask nor social distance.

All of this for what often adds up to an hour or two of substantive daily work. Restaurants, dry cleaners, and other services where Pentagon staffers circulate only add to the possibility of his being exposed to Covid-19.

My husband, in other words, is now unnecessarily risking his own and his family’s exposure to a virus that has to date claimed more than 150,000 American lives — already more than eight times higher than the number of Americans who died in both the 9/11 terrorist attacks and the endless wars in Iraq and Afghanistan that followed.

In mid-August, he will transfer to an office job in Maryland, a state where cases and deaths are again on the rise. One evening, I asked him why it seemed to be business as usual at the Pentagon when numbers were spiking in a majority of states. His reply: “Don’t ask questions about facts and logic.”

After all, unless Secretary of Defense Mark Esper decides to speak out against the way President Trump has worked to reopen the country to further disaster, the movement of troops and personnel like my husband within and among duty stations will simply continue, even as Covid-19 numbers soar in the military.

Global freedom of movement has been a hallmark of America’s vast empire of bases, at least 800of them scattered across much of the planet. Now, it may prove part of the downfall of that very imperial structure. After all, Donald Trump’s America is at the heart of the present pandemic. So it’s hardly surprising that, according to the Times, U.S. troops seem to be carrying Covid-19 infections with them from hard-hit states like Arizona, California, Florida, and Texas, a number of which have had lax and inconsistently enforced safety guidelines, to other countries where they are stationed.

For example, at just one U.S. base on the Japanese island of Okinawa, the Marine Corps reported nearly 100 cases in July, angering local officials because American soldiers had socialized off-base and gone to local bars in a place where the coronavirus had initially been suppressed. No longer. In Nigeria, where official case counts are low but healthcare workers in large cities are reporting a spike in deaths among residents with symptoms, the U.S. military arms, supplies, and trains the national security forces. So a spike in cases among U.S. troops now places local populations (as well as those soldiers) at additional risk in a country where testing and contact tracing are severely lacking. And this is a problem now for just about any U.S. ally from Europe to South Korea.

What this virus’s spread among troops means, of course, is that the U.S. empire of bases that spans some 80 countries — about 40% of the nations on this planet — is now part of the growing American Covid-19 disaster. …