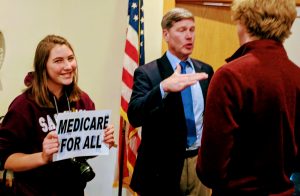 Rep. Ron Kind talks with one constituent and ignores another.

What do one of the founders of Facebook, the chief operating officer or Blackstone Group, the American Association of Clinical Urologists and the co-chairman of Bain Capital have in common?

It’s not a trick question. All are donors to U.S. Rep. Ron Kind, D-La Crosse.

Other big donors to Rep. Kind have included opioid distributors, their subsidiaries and employees, who gave $210,000 to the congressman’s campaigns over the last decade.

Rep. Kind, a former chair of the right-leaning New Democrat Coalition in the U.S. House, is a talented fundraiser. In just the first three months of this year, according to the Federal Election Commission, he’s raised over $1.2 million, and he has $3 million cash on hand ahead of the 2020 elections, a tidy sum for a relatively safe seat he’s held for decades.

But what does his wealthy and connected donor base tell us about Rep. Kind?

It’s a difficult question to answer, given that just about every corporate interest group that feeds at the Washington trough backs the La Crosse congressman. Political Action Committees linked to big pharma, big soda, big military and big pork, all put their hands in their pockets to help Rep. Kind.

Among the individuals who’ve maxed out their contributions to Rep. Kind this election cycle is one Sean Parker, with an address in Palo Alto, California. That would be the Sean Parker who was the first president of Facebook and founder of Napster, and has an estimated net worth of $2.7 billion.

Then there’s Joshua Bekenstein, the co-chairman of Bain Capital. You might remember Bain from the 2012 presidential election when current U.S. Senator for Utah Mitt Romney ran against then President Barack Obama.

Democrats spent much of that cycle bashing Romney for his time with Bain, of which he was a founder. The firm is known for leveraged buy-outs of businesses, which is corporate speak for buying companies on the cheap, loading them up with with debt, before running them into the ground and fleeing with the loot.

It would be strange for Rep. Kind to reject money from a leader of Bain Capital, when he’s also taking campaign cash from Mindy and Jonathan Gray, a New York power-couple whose hobbies including funding charter schools.. Mr. Gray is the billionaire president and chief operating officer of Blackstone Group, a gargantuan private equity group that manages some $571 billion in assets.

Stephen Schwarzman, the CEO of Blackstone, has donated $850,000 to President Trump’s inauguration and associated PACs since the 2016 election, and the firm is said to be the world’s largest corporate landlord and a driving force behind the deforestation of the Amazon.

Donors or PACs connected to Blackstone Group and Bain Capital have donated at least $16,800 for the 2020 election cycle to Rep. Kind, who sits on the powerful House Ways and Mean Committee.

And even MORE corporate cash for Ron!

Bigger sources of campaign cash for Rep. Kind come from the insurance industry ($171,717) and from health care professionals ($136,511), according to the nonpartisan opensecrets.org.

The health care industry and the insurance and pharmaceutical companies that profit from it have long been key backers of Rep. Kind. In recent years, the parts of that industry that spread highly addictive opioids across the country, causing well documented pain and suffering, have come in for intense criticism and been the target of heavy legal action.

MapLight, a nonprofit that works to reveal the influence of money in politics, found that Rep. Kind was the biggest recipient of money from opioid distributors, their subsidiaries and employees of those companies in the House over a ten year-period ending in 2019.

The analysis also found that “at least 563,000 grams of oxycodone and hydrocodone — roughly 1,000 milligrams of painkillers for every man, woman, and child” were distributed into Rep. Kind’s district, which covers all of La Crosse County, between 2006 and 2012.

Rep. Kind did sponsor legislation that passed the House but died in the Senate to expand access to treatment for opioid addicts. However, the bill contained no provisions to discourage the distributors of the drugs that have wrought immense damage all over the country.

There is, in fact, nothing remarkable in the multifarious group of extremely wealthy donors and corporate-linked groups that back Rep. Kind’s campaigns (PACs and large individual donors are the source of 89.7% of Kind’s campaign cash for this election cycle).

The same constellation of donors shovel cash to many of his colleagues in congress, often regardless of party affiliation. In that sense, Rep. Kind is just an ordinary congressman who has accepted the logic of a political system captured by big money.

Rep. Kind is being challenged in the Aug. 11 Democratic primary for the 3rd Congressional District by Dr. Mark Neumann, who recently retired from a 35-year career as a pediatrician. In contrast to his opponent, Dr. Neumann is refusing any PAC money.

“I will receive no PAC money because that money is like taking a bullhorn into a space where respectful conversation should happen,” Dr. Neumann notes on his campaign website.

Rep. Kind would likely insist that the large sums of money he receives from various corporate interests, particularly those linked to the health care industry, do not influence his work for the people in Congress (we contacted Rep. Kind’s campaign office for comment on this story but have yet to receive a response. We will update this article if we get one).

The single biggest challenge to the health care industrial complex that has long provided funding for Kind’s campaigns is Medicare for All, which poses a serious threat to the profits of big hospitals networks, insurance and pharmaceutical corporations. Rep. Kind has failed to get on board the Medicare for All train, despite rising support for the policy. Dr. Neumann, on the other hand, has made support for Medicare for All a signature issue of his campaign.