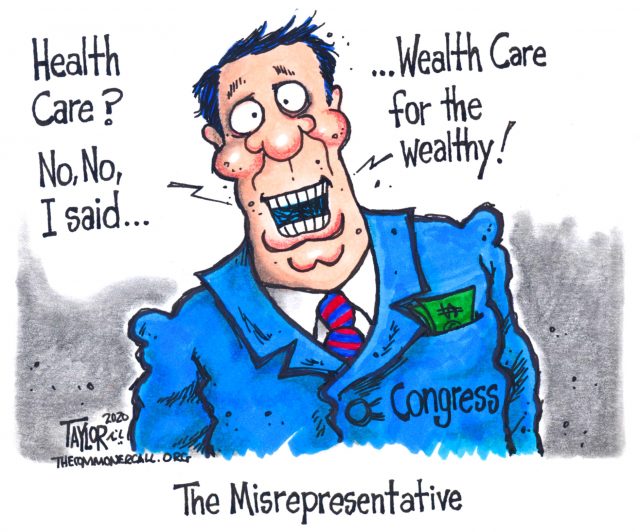 Our political class only worries about deficits and so-called fiscal responsibility when spending might actually help ordinary people.

In response, polls show Americans remain deeply concerned about the current health care system, and support for Medicare for All has surged. And yet, despite data showing that a single-payer system would save big money, surveys still indicate some popular trepidation about the price tag of government-sponsored health care.

That reflects, in part, a Democratic primary season that saw most candidates, the press corps and the Washington political class try to pretend that the planet’s wealthiest nation cannot possibly afford the kind of Medicare for All system that other less-wealthy nations have had for decades.

“No matter how you cut the numbers, there is absolutely no way to pay for Medicare for all without tax increases — or spending cuts — on the middle class,” one pro-austerity group told Politico in a story breathlessly touted by the health care industry’s dark money group.

But here’s what few seem to have noticed: As of the last few months, we just definitively proved we actually did have the money all along — and we had it even if we never hiked taxes to raise new revenues.

Somehow, this astounding fact was never granted any of the same giant boldfaced headlines that all the anti-Medicare-for-All fearmongering generated during the presidential primary.

Under our current system, America is on track to spend roughly $52 trillion on health care in the next decade. That includes both government programs (Medicare, Medicaid, etc.) and household spending (insurance premiums, out-of-pocket costs etc.). Medicare for All would consolidate all that spending under one program. Experts estimate that this would require the government to come up with an additional $20 trillion and $36 trillion — money that would cover the out-of-pocket spending that households and employers would otherwise pay to insurance companies, drug companies and other parts of the corporate-run health care system.

Well guess what? That happens to be almost exactly the amount of money our government committed to corporate bailouts since 2008:

The picture gets even more absurd when you slightly broaden the frame and add in another $10 trillion that we nonchalantly spent on other items.

For instance, we spent $2 trillion on the Iraq War. We also spent a combined $2.6 trillion on increases in the Pentagon’s already-giant base budget since its first post-9/11 budget. And we devoted about $5 trillion to the Bush and Trump tax cuts.

Now sure, bailout loans to big banks — which can get paid back — are a bit different than direct spending on a government program like Medicare for All. But then again, spending on Medicare for All is sort of like a loan to the future that can also get repaid with interest. When we spend on a program like that, we are likely to see significant overall savings for our economy, which would be a financial boon for the whole country. And because Medicare for All would eliminate insurance premiums and out-of-pocket costs, it would effectively be a huge tax cut for most Americans.

But that’s the thing: in our political conversation, Medicare for All is almost never cast as an efficiency — it is almost always cast as an unaffordable boondoggle. Indeed, during the presidential primary, Bernie Sanders and Elizabeth Warren were hounded by reporters, think tankers and lawmakers about how they could possibly pay for such a big program. To their credit, they played along and both released detailed plans about how they would raise the revenues.

By contrast, the same reporters, think tankers and lawmakers who spent the primary season attacking Medicare for All and preening as spendthrifts never bothered to ask about pay-fors for all of the aforementioned money for Wall Street firms, defense contractors & high-income tax cuts. All that happened without attendant deficit-neutral tax increases to finance it. We somehow just found the money.

That discrepancy spotlights an unstated truth: our political class only worries about deficits and so-called fiscal responsibility when spending might actually help ordinary people. If it’s a plan to reduce student debt, help retirees or expand health care, you can bet all of Washington is going to be ranting and raving about deficit concerns.

And yet when a proposal enriches the large corporations that buy elections and own our democracy, we can always find the money — and divert it away from initiatives like Medicare for All that might actually help millions of ordinary people.