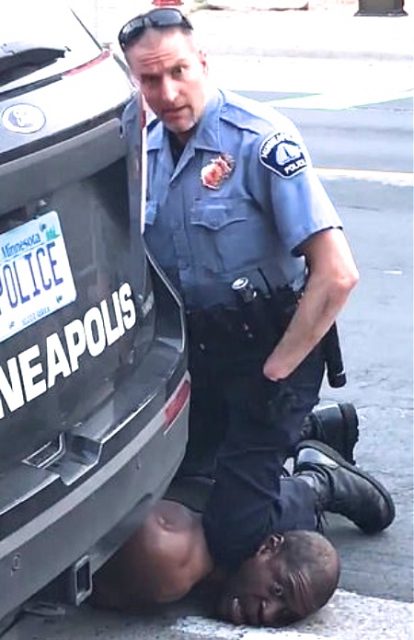 Minneapolis police officer Derek Chauvin, kneeling on the neck of George Floyd, resulting in Floyd’s death, Memorial Day, 2020. The image — and especially the entitled expression on Chauvin’s face — encapsulates the war waged by American law enforcement against African American and other minority citizens since the days of slavery and occupation of Native lands. (Screenshot)

The billions of dollars that governments spend on increasingly militarized police can be better used to address the underlying socioeconomic conditions that contribute to police encounters.

Amid worldwide protests against the police killing of George Floyd, activists around the US have raised demands for specific policy measures, such as defunding the police. Justifying these demands are the images emerging from the protests, with police officers ramming protesters in vehicles, indiscriminately attacking protesters with pepper spray and exerting excessive force. Local and state policing budgets have nearly tripled since 1977, despite declining crime rates. Even people unfamiliar with the police and prison abolitionist movement are starting, rightly, to envision that public spending could be used in more socially responsible ways.

But beyond the fiscal argument is an ethical one: policing in America cannot be reformed because it is designed for violence. The oppression is a feature, not a bug.

That seems like a radical sentiment only because policing is so normalized in American culture, with depictions in popular media ranging from hapless, donut-chugging dopes to tough, crime-fighting heroes. We even have a baseball team named after a police organization – the Texas Rangers.

But it’s time to look beyond the romanticization of American police and get real. Just as America glorifies the military and Wall Street, and some Americans whitewash the confederate flag and plantation homes, the history of policing is steeped in blood. In fact, the Texas Rangers are named after a group of white men of the same name who slaughtered Comanche Indians in 1841 to steal indigenous territory and expand the frontier westward. The Rangers are considered the first state police organization.

Likewise, as black people fought for their freedom from slavery by escaping north, slave patrols were established to bring us back to captivity. Many researchers consider slave patrols a direct “forerunner of modern American law enforcement”.  …