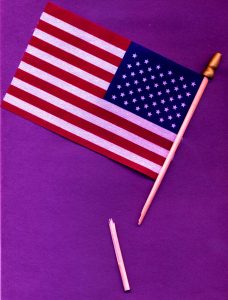 Trump got his Wall, Mexico did not pay for it.  The Wall separates Trump’s White House from the citizens of Washington DC and the United States.

Trump is not a leader, he’s a brawler. His energy requires a three-dimensional personification of a problem.  Someone or something that lends itself to nicknames or actions or appearances he can mock.  Something with history that he can use as a backdrop for his dog whistles that energize his base who in turn see him fighting for them.

Trump is done with the pandemic.  The coronavirus is unrelenting, it’s not a ‘thing’ that lends itself to his divisiveness or war metaphors though he tried and even succeeded with protective masks.  But he wasn’t up to the fight and the virus continues to march forward killing an average of 1,000 of our fellow citizens per day even while knocked off the front page.

Trump leadership doesn’t extend beyond photo-ops and bumper stickers – the virus was the wrong kind of villain for Trump.

Trump turned his back on coronavirus almost as if it isn’t still happening declaring victory in spite of more than one fourth of the virus related deaths in the world (US deaths of 112,000 out of 404,000 deaths globally).

Trump was ready to be the economic recovery guy even as US employment zoomed towards 20% with 40,000,000 people thrown out of work.  We collectively viewed him as a failure in fighting the virus so any change in narrative was welcome and time and the tried-and-proven reelection strategies made it look possible.

Now Trump is the ‘Law and Order’ guy, his third reelection strategy in one month.  I bet Trump thought ‘I got this, nobody knows how to manipulate divisiveness over race better than ‘me’.  I bet Trump saw Minneapolis policeman Derek Chauvin’s murder of George Floyd and the subsequent protests as another ‘Central Park Five’ moment, immediately wrapping his arm around the shoulders of personal attorney and attorney general William Barr’s shoulders, looking him in the eye knowingly and saying, ‘ANTIFA; we got this’.

Trump was willing to stand on the shoulders of people that suffered from racism for many decades, have suffered disproportionately from the virus, and disproportionately from the subsequent economy and now police brutality. But now police brutality has a face: Former Minneapolis police officer Derek Chauvin; and a victim, George Floyd. It’s all encapsulated in an 8+-minute video we can all watch without relying on the apologist re-frames of perpetrators-as-victims. Derek Chauvin killed George Floyd and you can’t ‘ANTIFA’ that out of the national conscience.

Trump did what Trump does, he doubled down, and made everything worse.  Trump encouraged more police brutality including attacks on peaceful protesters and the media.  But I am getting ahead of myself.

Here’s a compressed timeline of Trump’s chaotic, if not unhinged, leadership as victim.  The tone had been set because of the embarrassing news of Trump retreating to a White House basement bunker for protection leading to references like ‘Bunker Boy’ and ‘Bunker Bitch’.

Trump starts his Monday morning by talking to fellow authoritarian Russian president Vladimir Putin.  No one will say what was discussed but we’ll see some events that underscore some good guesses.  Trump gathers his toadies and demands a heavy-handed crackdown on protests including the use of the military — even tanks — against peaceful protesters exercising their First Amendment rights.

Trump fielded a 55-minute call with the governors. He called them, ‘weak’, and In Putin style, threatened that if they didn’t ‘defend’ properly, he’d send in his own military solution.

Daughter and White House hanger-on Ivanka Trump has a plan, yet another photo-op in lieu of real leadership that would have Trump pose in front of St. John’s Episcopal Church across from the White House in Lafayette Square.  Billy Barr is to make it happen.

Billy Barr makes it happen – a rag tag group of law enforcement brutally set upon the peaceful protesters. They used illegal chemical weapons while illegally masking identities and even illegally attacking the media to clear a path for Trump’s retinue to ‘stroll’ across the street for the photo op of Trump holding up a Bible — upside down.  A Leader would have read from the bible encouraging faith, unity, togetherness – Trump held up the Bible as if it was a foreign object, had some group photos taken and that was it.

His retinue included Ivanka who carried the Bible for the photo op in her $1,500 purse.  Billy Barr who would later argue that he never said ‘attack’ and tried parsing ‘what actually ‘is’ tear gas anyway’.  Defense Secretary Mark Esper who defended his participation by saying he didn’t know where we were going. The Chairman of the Joint Chief of Staff Mark Milley was in his battle fatigues, just another photo-op prop.

Esper tried to right the ship by standing down some of the 82nd Airborne military Trump had brought to DC but within hours rescinded his own rescinded order. Milley for other reasons was legitimately wearing his fatigues but it’s the photos that will be remembered.  Milley also talked the president down from a morning tirade over the expanded use of military and had him ‘settle’ for the use of various National Guards.

In response to Trump’s fear of the protesters, he’s now had an 8-foot tall fence set up around the entire White House complex. He got his Wall unconvincingly assuring us he is an ‘ally of all peaceful protesters’.

On Saturday Trump called German Chancellor Angela Merkel to inform her that the US was withdrawing 9,500 troops.  A surprise to Merkel, a surprise to Trump’s own military leadership; maybe not a surprise to Putin?  And speaking of Putin, the Trump/Barr effort to mask any identification of Barr’s rag tag White House defense smacks of Putin’s ‘Little Green Men’ when he refused to admit that Russia had just annexed the Crimea from Ukraine by military force.

Trump and leadership is nothing more than harsh words, photo ops and insults.  He’s incapable of demonstrating actual leadership.  He takes credit, assigns blame, lashes out, will say or do anything for attention but he is unable to set direction let alone follow through.  This pandemic has ripped aside the mask and what we see are age-old problems made worse.

Many stood up to criticize Trump.

One of the first was The Right Rev. Mariann Budde, the Episcopal bishop of Washington. In an angry and trembling voice she said, “Everything he has said and done is to inflame violence,” Budde of the president. “We need moral leadership, and he’s done everything to divide us.”

It must be noted that when asked, Sen. Ron Johnson (R-WI) responded, “didn’t really see it”.

Former Trump Defense Sec James Mattis was first with an opinion piece in The Atlantic.  Mattis said Trump “is the first president in my lifetime who does not try unite the American people…Instead he tries to divide us.”

Washington DC Mayor Muriel Bowser had a section of 16th Street near the White House painted with Black Lives Matter Plaza in huge yellow letters stretching for two blocks as she vies for jurisdiction for control while faced with Trump/Barr’s ‘little green men’.

Trump ended his week with a surprisingly positive Friday jobs report suggesting people were apparently returning to work and the unemployment rate fell to 13%. The numbers were wrong, unemployment did increase to 16.3% but Trump got his Friday ‘bump’ before people tune out the news for the weekend.

Trump is now itching to start traveling for reelection.  Trump visited a cotton swab factory (used for COVID tests) in Maine but after refusing to wear a mask the entire production for the day had to be trashed because of possible contamination.

Trump ventured from the White House earlier in the week and it did not go well for him.  Here’s a great set of photos of protesters ‘messaging’ Trump as his motorcade whisks by.

But Trump will venture out to Texas for a rally.  And he’s pushing for his summer GOP convention which will include NO social distancing or other obvious health precautions.

Trump has ditched plans for North Carolina and Gov. Ron ‘Mini-Trump’ DeSantis is pushing for a Florida venue even as Florida suffers a rise in new virus cases averaging 1000 per day for the last several days.

The US Marine Corps ordered the removal of all displays of the Confederate battle flag.  It’s as if any step forward brings dismay over why we only now are taking such simple steps.

While we can’t even agree to wear masks during a pandemic we do at least narrowly agree that police “treat whites better than blacks” and disapprove of “Trump’s response to events and protests in Minneapolis.”

Are we destined to see another racial crisis blow over without substantive change?  Even in the face of a pandemic, there is this advice from John Hopkins epidemiologist Jennifer Nuzzo:

“In this moment the public health risks of not protesting to demand an end to systemic racism greatly exceed the harms of the virus.”

Reverend Al Sharpton expresses hope as he sees white people outnumbering black people in some marches.  Sharpton shared a story that impressed him, of an 11-year old white girl tugged on his jacket after his speech at the George Floyd Memorial service and said, “No Justice, No Peace”.