“Trump knew and did nothing: “Donald Trump may not have been expecting this, but a lot of other people in the government were — they just couldn’t get him to do anything about it. The system was blinking red.””

“It’s the second goal that could succeed. By revving up hate among their supporters against China, Trump and Fox can redirect those supporters’ rage from the dangerous target it might otherwise find: the trusted political and media figures who lied and lied and lied to them, exposing those supporters to disease and death for their own crass ends. Hate China, not me!”

Trump’s daily briefings have a single goal – self-promotion with reelection in mind. He thinks his showmanship will save him and who knows, he may be right, but it’s our expense. He is seriously the know-nothing, attention-seeking bully who hogs the podium while providing no useful information, lies and attacks anyone who gets under his skin.

On Friday Trump went after NBC News reporter Peter Alexander. Alexander simply tossed Trump a softball question about what he’d say to “Americans who are scared”. Trump started his long tirade, with “I’d say that you’re a terrible reporter. That’s what I say. I think it’s a very nasty question, and I think it’s a very bad signal that you’re putting out to the American people.” (Report and video.)

Trump runs his daily shit-show without offering substantive information. It’s Trump’s Katrina a thousand-fold. Trump’s head of FEMA Peter Gaynor is cast in the role of Bush’s “heckuva job Brownie” and is equally inept but with a vastly different scope of consequences. Gaynor is consistently unable to answer basic questions about preparedness or emergency response; on Sunday morning he could not answer a simple question about protective masks, repeatedly dodging CNN’s Jake Tapper’s questions. Tapper finally offered, “You understand the inability of the federal government to give a number in terms of masks alarms people. It makes people concerned there aren’t masks going out the door”.

MSNBC host Rachel Maddow is one of a number of people calling for the media to stop live coverage of Trump’s daily reality TV show, offering, “If Trump is going to keep lying like he has been every day on stuff this important, we should, all of us, stop broadcasting it. Honestly, it’s going to cost lives.”

There are thousands of such examples of Trump and his failure to respond.

But if he only knew in advance so he could make sure we were prepared… Yet another Bush parallel, Trump DID KNOW, and did nothing.

U.S. intelligence reports from January and February warned about a likely pandemic

Trump once again ignored his own US intelligence.

“U.S. intelligence agencies were issuing ominous, classified warnings in January and February about the global danger posed by the coronavirus while President Trump and lawmakers played down the threat and failed to take action that might have slowed the spread of the pathogen, according to U.S. officials familiar with spy agency reporting.”

US intelligence agencies “tracked the spread of the virus in China…and warned that Chinese officials appeared to be minimizing the severity of the outbreak.”

“Donald Trump may not have been expecting this, but a lot of other people in the government were — they just couldn’t get him to do anything about it,” this official said. “The system was blinking red.”

Trump instead accepted China President Xi Jingping’s characterization, once again taking the word of another authoritarian over the counsel of his own people while praising China: “China has been working very hard to contain the Coronavirus,” Trump tweeted Jan. 24. “The United States greatly appreciates their efforts and transparency. It will all work out well. In particular, on behalf of the American People, I want to thank President Xi!”

Esquire compiled a devastating video record of Trump’s history of denying the seriousness of COVID-19 – it is a sad, sad record. We may well look back at this in a short time and rage in anger through our tears over what has happened by then.

In what already feels like ancient history, here is a comparison using the same starting point, South Korea’s CDC testing 290,000 people while the US tested an estimated 60,000. An estimate because Trump either doesn’t know or won’t tell us.: Special Report: How Korea trounced U.S. in race to test people for coronavirus 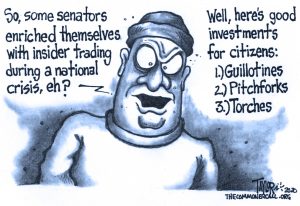 But we’re all in this together, right? Not exactly – we now have Virus Vultures.

This article from The London Economic links to a number of other reports of four Senators accused of dumping stocks after learning of the virus through confidential briefings. I will offer a quick observation of each of the five (yes, five); two are additionally noteworthy for their Trumpian cheerleading pooh-poohing the risk to the US public:

Sen. Richard Burr (R-NC) – a Trump no-worries cheerleader dumped $1.7 M over January and February (33 transactions), AND warned wealthy constituents. Even his peer, Sen. Tillis, (R-NC) sees Burr as being in deep trouble. In 2012 Burr voted against a law that would have prohibited what he is accused of doing.

Sen. Kelly Loeffler (R-GA) — another Trump no-worries cheerleader, “sold off seven figures’ worth of stock holdings”. The first transaction was to dump a stock that has now fallen by 50%. Loeffler, who with her husband who is the head of the New York Stock Exchange, and is worth an estimated $500 M, blames Democrats and claims investment decisions are made by advisors without the knowledge of her or her husband.

Sen. Diane Feinstein (D-CA) — “sold up to $6m in stock in the same period.” (London Economic). Feinstein says her investments have been held in a blind trust for her entire Senate career “with no control”. She also did not attend the briefing attended by Loeffler.

Sen. Jim Inhofe (R-OK) — Sold up to $400k of his investments. Inhofe claims he has been systematically moving individual stocks out of his portfolio since 2018 to “avoid any appearance of controversy”.

Finally, our very own Sen. Ron Johnson (R-WI) — Sold “between $5 million and $25 million” of his ownership in a family owned/operated business, something that has been in the works for a long period of time. Progressive journalist John Nichols offered (as a correction), “the transaction…was unrelated to the coronavirus pandemic.”

Burr and Loeffler were lying to us, downplaying risk, while dumping investments. Virus Vultures. Feinstein and Inhofe? Senate Ethics will — one hopes — sort all of this.

Virus Vultures and Sen. Rand Paul (R-KY), the first Senator to be confirmed with coronavirus, was asymptomatic yet still tested (positive). Paul voted against coronavirus test for all.

There are so many news reports that add perspective, such as “China begins clinical trial for vaccine”.  And many that are a more damning view of Trump, “North Korea says Trump offered to help in the fight against coronavirus”.

Whatever measures we’ve taken globally, but more specifically in the US are not enough, things will get much worse before we see better conditions.

There is a particularly scary report that Trump’s Department of Justice wants to roll back your constitutional rights by denying citizens who are arrested a right to a trial.

If there is a single defining failure of Trump’s leadership it is his failure to provide tests. The United States was not one of the first 60 countries to react:

“On Saturday Jan. 11 — a month and a half before the first Covid-19 case not linked to travel was diagnosed in the United States — Chinese scientists posted the genome of the mysterious new virus, and within a week virologists in Berlin had produced the first diagnostic test for the disease.

“Soon after, researchers in other nations rolled out their own tests, too, sometimes with different genetic targets. By the end of February, the World Health Organization had shipped tests to nearly 60 countries.”

Trump wasted precious and irretrievable weeks and many people will die because of it.

It is still not clear why the US was not one of the countries to act quickly using the World Health Organization tests. “VP Pence, Health Secretary Alex Azar, CDC director Robert Redfield, and Food and Drug Administration Commissioner Stephen Hahn” have not seen fit to answer questions about that fatal decision.

Given the outlook there are suggestions that tests be reserved only for front line health care workers. Ethicists are coming to terms with how health care may need to be prioritized.

There are so many unknowns. Each of us can do our best to limit our personal exposure and risk, which helps with the collective good as well.

I’ll end with one final observation/question – have you heard Trump ever offer one single syllable of sympathy for the victims?

I will give the last word to New York Times Opinion writer Michelle Goldberg:

“It can become tedious to dwell on the fact that the president is a dangerous and ignorant narcissist who has utterly failed as an executive, leaving state governments on their own to confront a generational cataclysm. But no one should ever forget it.

“Soon, even if the pandemic is still raging, there will be an election, and the public will be asked to render a verdict on Trump’s leadership. Being clear that people are suffering and dying needlessly because the president can’t do his job isn’t looking backward. It’s the only way to move forward.”

Our verdict – it cannot be soon enough. Vote.