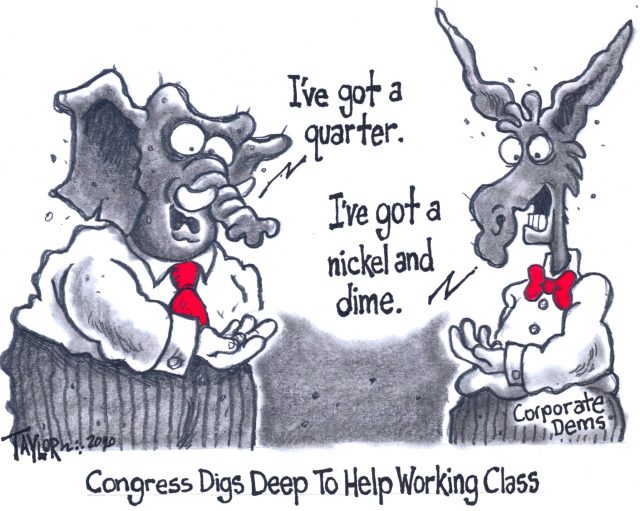 This is what happens when you organize every aspect of your society to promote wealth accumulation and nothing else.

As it turns out, American capitalism doesn’t hold up all that well under the stresses and strains of a virulent pandemic.

In the face of the coronavirus, that stingy “real time delivery” dictum taught in business school to guide how we deploy labor and distribute stuff can be a recipe for needlessly high body counts and wealth destruction on the scale of the Great Depression.

To be fair, this was the same impulse we saw in the Bush/Obama response to the Great Recession. Their remedy led to Wall Street’s pillaging of MLK Boulevard and Main Street, the destruction of $20 trillion in household wealth, and accelerated wealth concentration. It also left tens of millions of households in a precarious position to face this pandemic.

It’s our grocers, postal workers, trash collectors, nurses and emergency medical technicians who hold the jobs that are the most essential and need protecting.

And while President Franklin Delano Roosevelt’s response to the Great Depression in the form of the New Deal was widely praised for uplifting working-class Americans, we must remember that it left out Americans of color. Consider the Faustian bargain that FDR made with the Dixiecrats to get basic labor protections and standards for workers that expressly left out domestic and agricultural workers.

Greed dies hard.Now that the wolf (COVID-19) is at the door, we can see the reflex that many political leaders have to put wealth preservation above the common good. Four senators, including Sen. Richard Barr (R.-NC), chair of the Senate’s Intelligence Committee, sold off significant stock holdings after being briefed on the impending coronavirus pandemic.

These guys can’t help themselves. When destiny asks them to choose between money or life, they pause to make a trade. .

This is what happens when you organize every aspect of your society to promote wealth accumulation and nothing else. It’s really just physics. You invest everything in accumulating gold or money for security and all of the sudden your life gets cut short as your lungs no longer function because you caught coronavirus from some other person who accidentally became the real sculptor of your destiny.

This will come as a real downer for the wealthy elites who have structured their lives around pre-coronavirus social distancing behind the gated walls of privilege that won’t protect them now. …

U.S. Senator Rand Paul (R-KY) announced he has tested positive for coronavirus, and he’s under fire for his actions after possibly becoming infected weeks ago yet taking no measures to protect his fellow lawmakers – and in fact putting them in danger. Sen. Paul likes to present himself as a medical doctor – and not just a medical doctor, but a surgeon. Dr. Paul is an ophthalmologist who “performs pro-bono eye surgeries for patients across Kentucky,” in his free time, according to his campaign site.

According to CNN’s Jake Tapper, Sen. Paul attended an event in Kentucky on March 7 – more than two weeks ago. On March 15 it was publicly reported that two people who also attended the event tested positive for coronavirus. It is not known if Paul was told before March 15.

Tapper’s source, who is close to Sen. Paul “says the senator was confident he hadn’t interacted with the two so he didn’t think much of it, but then he thought about the particular vulnerability of those with respiratory and lung issues.”

Thinking about his own health, Paul, the only senator to vote against a bipartisan coronavirus pandemic aid package, “decided to play it safe” and get tested …