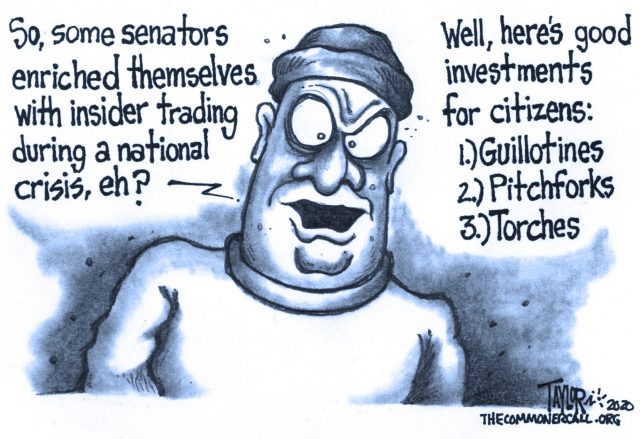 [Cartoon Note: Inspiration was drawn from one of many online comments seen throughout the past five days. The idea stuck with me, but I do not recall who wrote the original comment. — Mark L. Taylor]

There’s something deeply disturbing about seeing someone profit from a disaster, and we’ve already seen a few examples in the present crisis. First it was the guys who bought up over 17,000 bottles of hand sanitizer in the hopes of selling them at a high markup. (After Amazon put a stop to their sales, the pair of hoarders donated the sanitizer.) Now we have reports that multiple US senators may have acted on inside information about the coronavirus pandemic, selling stocks in anticipation of a crash, even as they failed to warn the public about the danger posed by the virus. These allegations, if they are indeed true, show that even in a time of crisis, our elected officials are looking out for themselves rather than the public.

Elected officials whose first response to a pandemic is to cash in are indeed monstrous. But it’s not especially surprising in the Trump Era, when the pathological pursuit of financial self-interest is widely seen as unobjectionable.

ProPublica reports that North Carolina Republican Richard Burr, who was receiving daily coronavirus briefings as chairman of the Senate Intelligence Committee, “sold off a significant percentage of his stocks, unloading between $628,000 and $1.72m of his holdings,” a week before the stock market tanked. And while in public he was insisting that the government was capable of handling the virus, to well-connected constituents at the Capitol Hill Club he was warning that the virus was “much more aggressive in its transmission than anything that we have seen in recent history.” Then there was Georgia Republican Kelly Loeffler, who according to the Daily Beast also sold a substantial amount of stock in the leadup to the cash, as well as buying shares in the teleworking company Citrix. Other senators also sold stock around the same time, though the evidence of insider trading is less clear in the other cases.

Burr, Loeffler, and the others have denied wrongdoing, though have not offered especially convincing alternate explanations for the sales. If they did trade on insider information, what they did was probably illegal—under the Stock Act, which Burr voted against, lawmakers are prohibited from trading on “nonpublic” information, though the definition of nonpublic is not always clear and Burr says he relied solely on public news reports.

But even if that was true, the fact that Burr had reason to suspect that the disaster would be worse than he was publicly letting on is a deep betrayal of his constituents. He should entirely lose the confidence of the public, because it’s clear that he chose to make money at a time when he should have been offering Americans the truth. That’s why even figures like Tucker Carlson and Ben Shapiro have been outraged by the alleged behavior, with Carlson saying there is “no greater moral crime” than choosing yourself over your country at a time of crisis. …