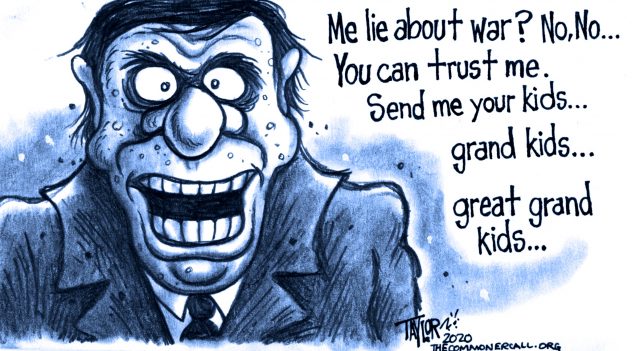 “We have a government that is so easily dominated by psychopaths and sociopaths.”

[Editor’s Note: This whole video is worth the time, but if nothing else, watch the opening video mash-up of the Republican and Democratic lies that have repeatedly thrown the nation into wars for corporate profits. The take-down of House Speaker Nancy Pelosi’s recent kow-towing to Trump’s war actions are revealing of the bipartisan evil we face. — Mark L. Taylor]

Two Iraq war veterans explain why Congress has failed to stop the endless wars in Iraq and Afghanistan, and say the United States needs to learn from its imperialist history if anything is going to change.

Link To Transcript And 25-Minute Video

“And for the Speaker of the House to stand there and claim that all she can do is pray, as well then to lie about what she’s doing because she did say, Nancy Pelosi did say, that this is going to limit the President’s actions and tie his hands when again, it doesn’t have the force of the law.”

— Matthew Hoh, a Senior Fellow at the Center for International Policy, former Director of Afghan Study Group and a Marine Corps officer who served in the Iraq war and in 2009 he resigned his state department position in Afghanistan in opposition to the escalation of that war. He’s now a member of Veterans for Peace.

Seth takes a closer look at a new poll saying a majority of Americans disapprove of President Trump’s handling of Iran, as the president’s own team struggles to defend his lies and borrows directly from George W. Bush’s playbook.