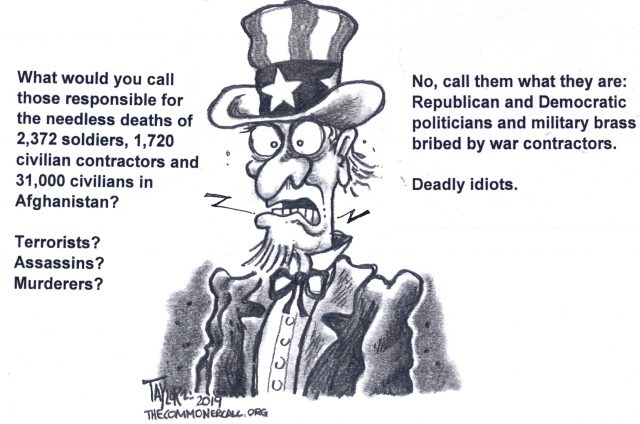 “Truth was rarely welcome. Bad news was often stifled. Every data point was altered to present the best picture possible. Surveys, for instance, were totally unreliable but reinforced everything we were doing was right. And we became a self-licking ice cream cone.”

For nearly two decades, U.S. government officials crafted a careful story of progress to justify their ongoing military campaign in Afghanistan. Newly disclosed documents reveal to what extent that story was not the reality of the war. Today, one former Marine speaks about the missteps the government concealed for years. Guest: Thomas Gibbons-Neff, a reporter in The New York Times Washington bureau and a former Marine infantryman and Eric Schmitt, who covers terrorism and national security for The New York Times. For more information on today’s episode, visit nytimes.com/thedaily.

A blockbuster investigative series from the Washington Post reveals the extent to which top officials in both the Bush and Obama administrations misled the public about widespread failures in America’s eighteen-year war in Afghanistan. The story described the ways in which the original mission of dismantling the Taliban was expanded with time, and how American money was funneled into the war despite a shared understanding among many U.S. officials that it was helping spawn corruption in the fledgling democracy.

What impact — if any — will the stark findings have on Capitol Hill, the Pentagon, or American voters? To discuss, Jim Braude was joined by Stephen Kinzer, a former foreign correspondent for the New York Times, now a senior fellow at the Watson Institute for International and Public Affairs at Brown University; and Neta Crawford, director of the Watson Institute’s Cost Of War Project, and chair of the political science department at Boston University.