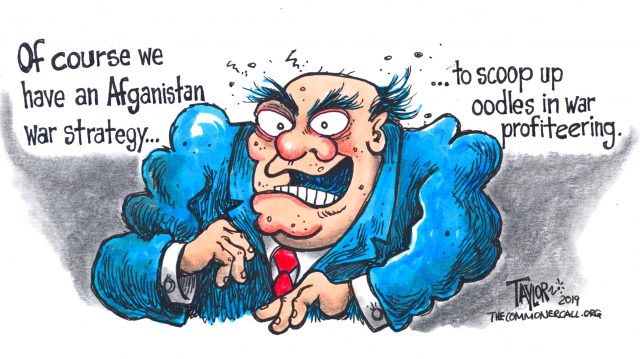 “The documents show the American people were lied to.”

For nearly two decades of fighting in Afghanistan, U.S. leaders have sounded a constant refrain: We are making progress. Government interview records obtained by The Washington Post after a three-year legal battle show otherwise. [The Washington Post also produced the excellent video below to go with this story. — Ed.]

Read more: At War With The Truth

A major Washington Post investigation released Monday is a confirmation of the peace movement’s message that “there’s no military solution in Afghanistan.”

That’s according to Paul Kawika Martin, senior director of policy and political affairs at Peace Action, replying to “The Afghanistan Papers.” The report exposes how top officials spanning the George W. Bush, Obama, and Trump administrations waged a deliberate misinformation campaign to conceal the total failures of the 18-year war in Afghanistan.

The bombshell from investigative reporter Craig Whitlock “broadly resembles the Pentagon Papers,” and it is based on over 2,000 pages of notes from interviews with a federal agency that “bring into sharp relief the core failings of the war that persist to this day” and belie comments by officials  “who assured Americans year after year” of progress made in the war.

“Our biggest single project, sadly and inadvertently, of course, may have been the development of mass corruption.”

The paper obtained the cache of documents following a legal battle that lasted three years and included two lawsuits.

The documents came out of a project from the Office of the Special Inspector General for Afghanistan Reconstruction (SIGAR), an agency now headed by Obama-appointee John Sopko. That project, entitled Lessons Learned, was meant to assess “the U.S. reconstruction experience in Afghanistan.” While it has released a number of reports beginning 2016, those public documents had major omissions, namely “the harshest and most frank criticisms from the interviews” SIGAR conducted.

As the Post reported, the interviewees, who were directly involved in the war effort, were forthright, believing their remarks would not be made public. They revealed that officials continually misled the public about the war’s success, there was no strategy, their efforts fueled corruption, and the U.S. was clearly losing ground as well as tens of thousands of lives and at least $1 trillion.

The trove includes transcripts and notes from over 400 interviewers between 2014 and 2018. SIGAR blacked out names of roughly 85 percnet of interviewees.

“It was impossible to create good metrics” about the troop surge, one unnamed senior National Security Council official said in a 2016 interview. “We tried using troop numbers trained, violence levels, control of territory and none of it painted an accurate picture.” They added, “The metrics were always manipulated for the duration of the war.”

That theme was similar to Army colonel Bob Crowley’s remarks in a 2016 interview. “Surveys, for instance, were totally unreliable but reinforced that everything we were doing was right and we became a self-licking ice cream cone,” Crowley said.

Ryan Crocker, who was the top U.S. diplomat in Kabul from 2011 to 2012, said in a 2016 interview, “Our biggest single project, sadly and inadvertently, of course, may have been the development of mass corruption.”

“I have no visibility into who the bad guys are,” Rumsfeld said in a 2003 memo. “We are woefully deficient in human intelligence.”

“Take the time to read every word of this,” progressive commentator Krystal Ball said on Twitter of Whitlock’s new investigation. “Three administrations have lied to us about Afghanistan. How many lives have been lost and fortunes spent for nothing??”

Rep. Ro Khanna (D-Calif.) said the takeaway from the reporting was clear: “18 years later it’s time to get out. Now.”

Link To Story And 17-MinuteVideo

[Editor’s Note: Congress doesn’t care about what has happened in Afghanistan. They benefit from the war contractor campaign donations while knowing their pampered children will never wear a uniform. It is truly bipartisan betrayal of the nation. — Mark L. Taylor]

WASHINGTON ― A bombshell report detailing how successive U.S. administrations misled the public about the nearly two-decade-long war in Afghanistan went mostly ignored by lawmakers on Tuesday, as some said they weren’t even aware that it had been published.

The muted response in Congress reflects broader apathy among the electorate itself about the 18-year war in Afghanistan, the longest armed conflict in U.S. history that has cost roughly 2,400 lives and more than $2 trillion.

Lawmakers said they remain unaware of the revelations on how the government misled the public about the prolonged conflict.

According to secret documents obtained by The Washington Post, U.S. officials routinely lied about the progress U.S. forces were making in the Afghanistan War, knowing full well the lengthy conflict was almost assuredly unwinnable. The rosy inflation of expectations about the war effort was maintained by officials across three successive administrations ― George W. Bush’s, Barack Obama’s and Donald Trump’s ― despite metrics that showed the opposite.

“We were devoid of a fundamental understanding of Afghanistan ― we didn’t know what we were doing,” Douglas Lute, an Army general who served as the White House’s Afghan war czar during the Bush and Obama administrations, told government interviewers in 2015, according to the Post.

“What are we trying to do here?” he continued. “We didn’t have the foggiest notion of what we were undertaking.”

The documents also detailed how the hundreds of millions of dollars the U.S. spent in its war on terror, in part on contractors and private security firms, fostered corruption that made the situation in Afghanistan even worse. …

‘Let’s Bring Rumsfeld In’: Rep. Ro Khanna Calls for Hearings on US Officials Who Lied to American People About Endless Afghan War

Rep. Ro Khanna on Wednesday said that The Washington Post‘s explosive investigation the “Afghanistan Papers” showed the need for a congressional hearing and that former Pentagon chief Donald Rumsfeld should be among the current and former top officials called in for a reckoning before the American public.

Khanna (D-Calif.) made the comments at a House Armed Services Committee hearing. Hebegan addressing Secretary of Defense Mark Esper by summing up the Post‘s report from Monday.

“The bottom line is that top military officials and civilian officials have known that the Afghan war has been has been unwinnable and have been misleading the American public for 20 years,” Khanna said. “Your predecessor Secretary Rumsfeld was quoted there as saying, ‘I have no visibility into who the bad guys are.'”

“Are you embarrassed by Secretary Rumsfeld comment and the other people quoted, and do you believe they owe the American public an explanation and an apology?” Khanna asked Esper.

Esper said it was up to the committee on whether or not to call a hearing. “But I do know this much. The story spanned multiple administrations, multiple uniformed and civilian officials, and I think it’s good to look back.” …