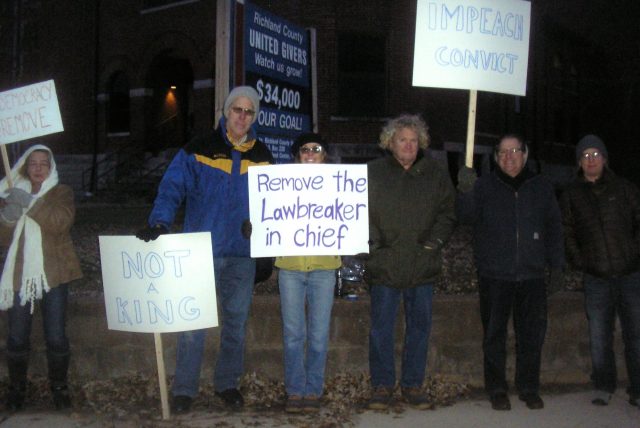 Patriotic citizens braved frigid temperatures  Tuesday evening in downtown Richland Center in support of the impeachment of Donald Trump. About 15 citizens from several nearby communities gathered for the event, which was part of a nationwide citizen action showing support of justice in the United States. (Photo by Tom Crofton)

“Conservatives will someday face the horrible truth that the Republican Party fought so hard to justify and excuse an amoral and self-serving president, and what he gave them in return was bigger government and erosion of the principles and values they once claimed to cherish.”

Beyond the big news – a bit of Trump impeachment round-up. In no particular order.

On Tuesday Trump sent House Leader Pelosi a scathing letter about House impeachment. An interesting point, Trump by-passed White House lawyers and instead the 6-pager was written with advisor Stephen Miller and a few others. The Washington Post offered an annotated version for easier reading. This angry letter from a guy that counsels Time Person of the Year, climate change voice Greta Thunberg on anger management. It’s another great reminder of why 4 more years is a horrible idea.

“What happens if McConnell never agrees to a real trial with witnesses and documents and Schumer doesn’t cave? Then Trump will have been found guilty by the House of conduct “grossly incompatible with self-governance and the rule of law,” with NO exoneration. He won’t love that.”

Russian state TV aired a segment titled “Puppet Master and ‘Agent’ – How to Understand Lavrov’s Meeting With Trump”. Last edition I commented on Lavrov’s visit, traveling from Paris on the heels of Putin’s meeting with Ukrainian president Zelensky. While Putin suggested the meeting is ‘enough’ to warrant relaxation of US sanctions against Russia, Rossiya 1 aired the segment offering Trump asylum in Russia.

“The host, Vladimir Soloviev, smugly asked: “Should we get another apartment in Rostov ready?” Soloviev’s allusion was to the situation of Viktor Yanukovych, former president of Ukraine, who was forced to flee to Russia in 2014 and settled in the city of Rostov-on-Don.”

Congress voted overwhelmingly last week to recognize Turkey’s massacres of Armenians in 1915 as genocide. Trump now contradicts Congress and says he does not consider the mass killings as genocide. Armenia says 1.5 million people were killed. Turkey’s president Erdogan visited the White House last month with Trump offering that he was a “big fan”. Trump can not be trusted to speak for the United States. 4 more years is a bad idea.

The travails of Trump minions

The Jerusalem Post confirmed that the $1 million payment to indicted Giuliani associate Lev Parnas was made by US sanctioned Ukrainian oligarch Dmytro Firtash. Another interesting fact noted by Caroline Orr, FBI lawyer Lisa Page, the same one suing the Department of Justice for wrongful disclosure of information about her, worked on the FBI money laundering case against Firtash. The money laundering case against Firtash characterizes him as connected to Russian mafia.

71% of American polled “believe President Trump should allow his top aides to testify at his impeachment trial”. I offer this because the Washington Post article speaks to the careful manipulations of Republicans ahead of a Senate trial. As an example, while Senate Leader Mitch McConnell (R-KY) goes on Fox News to explain his trial strategy, Sen. Susan Collins (R-ME) criticizes Sen. Minority Leader Chuck Schumer (D-NY) for publicly noting his own (party) conditions for a fair trial. To this Collins said, “the more constructive way would have been for him to sit down with Sen. McConnell”. Did she mean before of after McConnell’s Fox News appearance?

Meanwhile Sen. Joni Ernst (R-IA) appears to not understand the impeachment process offering that there is no need for witnesses to be called in a Senate trial.

“I think we’re good there,” Ms. Ernst said. “I mean, if the House wanted to do more, they could have done more. We don’t need to clean up their sloppy job.”‬

Of course the witnesses she feels are not needed are first-hand witnesses and part of the scam persons like Trump chief of staff Mick Mulvaney. Or former Trump national security adviser John Bolton.

Sen. Mitt Romney refused to comment on the discussion of witnesses.

It is supposed moderates like Romney and Collins that would need to step up if there is to be a fair trial in the Senate. If not, see Laurence Tribe’s suggestion above.

And that is a perfect lead-in to …

Trump clown lawyer Rudy Giuliani admits he got Yovanovitch fired. He had to get her out of the way to have the freedom to operate in Ukraine to dig up dirt on Biden and find people who would declare it was Ukraine interfering in the 2016 election, not Russia. While no credible evidence has surfaced, Giuliani and Trump attorney and attorney general William Barr continually declare, ‘just you wait’. Barr did this while criticizing his own Department of Justice Inspector General report that declared the FBI opening of the investigation of Trump and Russia was justified.

This is a somewhat lengthy but thorough review of all you’ll need to know about who is who amongst the Ukrainians that Giuliani is trying to use to make his ‘case’. It can be as challenging as ‘who are all these Russians’ from Trump-Russia, but that’s part of the Trump-Russia /Trump-Ukraine parallel. And it’s part of Trump and Trumpster gaslighting – they count on people switching off as soon as Giuliani waves his arms about yet another Ukrainian prosecutor that is supposedly delivering the goods. It’s worth the read – don’t fall for Trump gaslighting.

The Ukrainian Prosecutor Behind Trump’s Impeachment

Sub-head: How the efforts of Yuriy Lutsenko and Rudy Giuliani to smear Joe Biden led to a Presidential crisis.

Impeach and Remove. 4 more years is a horrible idea.