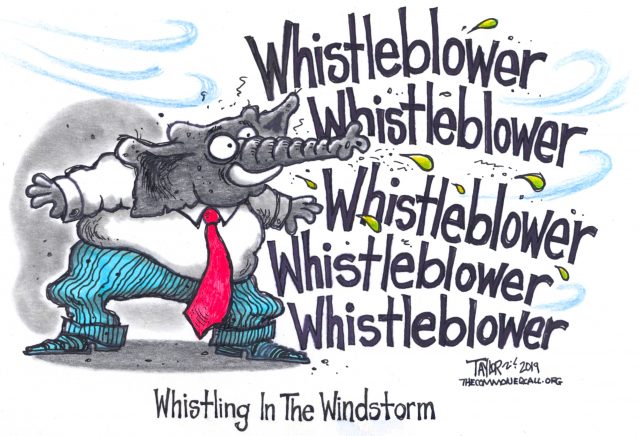 Yesterday, was an auspicious day. It was not a good day for Trump.

Wednesday was the first day of the House Impeachment hearings against Trump, but even that should be in the context of the entire day.

Make no mistake, while this trial is against Stone it is also about Trump. If not for special counsel Robert Mueller honoring Department of Justice guidelines about not charging a sitting president, the list of charges brought against Stone could well apply to Trump. Here’s an interesting parallel, Stone’s defense attorney Bruce Rogow argued, “Much of this case, you have to ask, ‘So what?’” ‘.

‘Sure he lied’ is the Stone defense version of Trump’s ‘So what if he extorted the head of state of a foreign country for personal gain?’

Trump engaged with Turkish President Erdogan in “a restricted bilateral meeting, and an expanded working luncheon.” Trump’s ‘restricted bilateral meetings’ seem to be a pattern with his authoritarian peers. In this instance five GOP Senators were invited to attend though not Democrats. But even GOP Senators have concerns with Trump’s relations with Turkey citing the “sale of Russian weapons to Turkey and Turkey’s conflicts with Kurds”. Senator Ted Cruz called out the Russian sale of S-400 anti-aircraft weapons negating the participation of Turkey as a NATO nation using US F-35 fighter jets. Turkey has the second largest military of all NATO nations — now a partner with a foot on each side of NATO’s defense against Russian aggression.

It wasn’t that long ago — during the build-up to the 2016 election — when then House majority leader Kevin McCarthy (R-CA) said, “There’s …there’s two people, I think, Putin pays: [California Representative Dana] Rohrabacher and Trump… swear to God.” Then House Speaker Paul Ryan (R-WI) countered with, “this is an off-the record… NO LEAKS… alright?”

We have never evolved past that moment. Coincidently, McCarthy made his comments to fellow Republicans immediately after meeting then Ukrainian Prime Minister Vladimir Groysman though through the full McCarthy-Ryan exchange it became clear they had little or no understanding of Groysman or Ukraine. I remember reflecting at the time how neither Ryan nor McCarthy had NO concern over how Ukraine was dealing with Russian annexation of Crimea and their invasion of eastern Ukraine. In eastern Europe this is called the Russo-Ukraine War. It started in 2014 since then and 13,000 Ukrainian fighters have lost their lives. Five years on, in 2019, nothing has changed.

I offer this as context – every day there is some transgression by Trump and a rallying of Party of Trump to attack the attackers and justify Trump’s latest impulsive act du-jour.

Day One of the Impeachment Hearings

Here’s my view of Day 1 of the Trump Impeachment Hearings, using this context.

ONE: Riveted? Or bored?

The remarks by House Intelligence Minority Leader Devin Nunes and questioning by GOP legal counsel and the other representatives was disingenuous, insulting, narrow, tedious and argumentative. Amazingly — even for Nunes — his opening remarks had him offering disproven conspiracy theories.

The witnesses were credible, very credible. I will come back to this.

THREE: Who is telling the more persuasive story?

I will ask you to decide this for yourself as I come back to the question above.

Of course there were. And Schiff deflected these expertly. But in the broader sense, ‘hijinks’ is about Party of Trump undermining witnesses and hijacking the discussion to argue anything other than Trump’s extortion of a foreign head of state for personal political gain. Hijinks is the entire Party of Trump strategy for defense.

I will table this for now since we’re just getting started and so far it’s the same old script about a ‘perfect call’ that was perfectly ‘imperfect’. That is part of the defense: focus narrowly on one event taken out of a context of six months of planning and execution of extorting Ukraine to benefit Trump.

You decide. Consider the following, it will only take a few minutes.

As I said above, Schiff, Taylor and Kent were compelling and believable. I have special regard for the final two pages of Taylor’s opening statement, including this:

“Mr. Chairman, there are two Ukraine stories today. The first is the one we are discussing this morning and that you have been hearing for the past two weeks. It is a rancorous story about whistleblowers, Mr. Giuliani, side channels, quid pro quos, corruption, and interference in elections. In this story Ukraine is merely an object.

“But there is another Ukraine story—a positive, bipartisan one. In this second story, Ukraine is the subject. This one is about young people in a young nation, struggling to break free of its past, hopeful that their new government will finally usher in a new Ukraine, proud of its independence from Russia, eager to join Western institutions and enjoy a more secure and prosperous life. This story describes a nation developing an inclusive, democratic nationalism, not unlike what we in America, in our best moments, feel about our diverse country—less concerned about what language we speak, what religion if any we practice, where our parents and grandparents came from; more concerned about building a new country.”

One Ukraine story is about hope and justice. Party of Trump is about ‘outing’ a Whistleblower and Rep. Jim ‘Gym’ Jordan’s scripted Fox News talking points. One version is uplifting and worthy of our support, the other is a series of ‘dick moves’ — the standard that is just meant to undo our collective faith in government because ‘they all do it’.

Every Trump transgression has the Party of Trump chanting, ‘So What?’

The ‘So What?’ is that we care, it is wrong and we want it to change as soon as possible. We want good, honest governance, a government that is for all of us.

(Commoner Call cartoon by Mark L. Taylor, 2019. Open source and free for non-drivative use with link to www.thecommonercall.org )