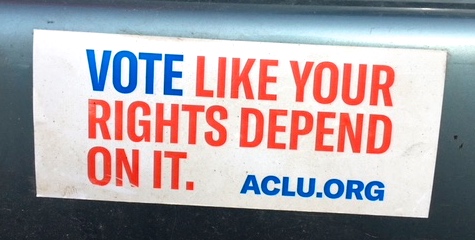 [Editor’s Note: While violent right wing nationalist and fascist groups run about pretty much unimpeded — and even sometimes aided — by law enforcement, we have the government tracking human rights groups trying to assist abused migrant children. Any doubt about what kind of government we have? — Mark L. Taylor]

The U.S. military is reportedly surveilling rights groups and activists engaged in peaceful protests against both President Donald Trump’s border wall and the separation of migrant children from their families at the southern border.

According to an internal Pentagon document obtained by Ken Klippenstein of The Young Turks in partnership with The Intercept, military forces deployed to the U.S.-Mexico border assessed the “threat” posed by interfaith group Heartland for Human Justice and Rio Bravo Action Camp, an activist training camp hosted by the Democratic Socialists of America’s Rio Grande Valley Chapter, the Carrizo Comecrudo Tribe of Texas, and other organizations.

“Cataloging individuals protesting government policy creates serious risk of abuse, and even without misconduct, monitoring protesters is likely to chill the exercise of First Amendment rights.”

“As of 1 Aug 19, 11(-1) individuals are attending and 18 (+1) are showing interest,” reads the “threat estimate” for a September protest organized by Heartland for Human Justice, which was formed to protest the Trump administration’s mass detention and separation of immigrant families.

Klippenstein wrote that “the ‘-1’ and ‘+1’ notations appear to refer to changes in the number of individuals attending or showing interest in the event.”

The Trump administration told a federal court last month that U.S. authorities separated 1,556 migrant families before the White House’s so-called “zero-tolerance” policy was implemented, adding to the approximately 2,800 families that were separated under the policy.

“Those are 1,600 hundred families we’ll now have to find and search all over the world for,” Lee Gelernt, an attorney with the ACLU, told CBS News. “And it’s ongoing. That’s the really scary part. We get a list from the government every month.”

Jake Laperruque, senior counsel for the Constitution Project at the Project on Government Oversight, told Klippenstein that the military’s “threat estimates” of nonviolent demonstrators protesting the Trump administration’s anti-immigrant agenda are “highly disturbing.”

“I don’t know why some of this information is needed—some of the activities (where protesters are coming from, sponsors, other activities outside the border, etc.) have no connection to ensuring safe interactions,” Laperruque added. “I can’t think of any reason for cataloging that information other than to monitor protesters’ activities more broadly, and potentially identify them.”