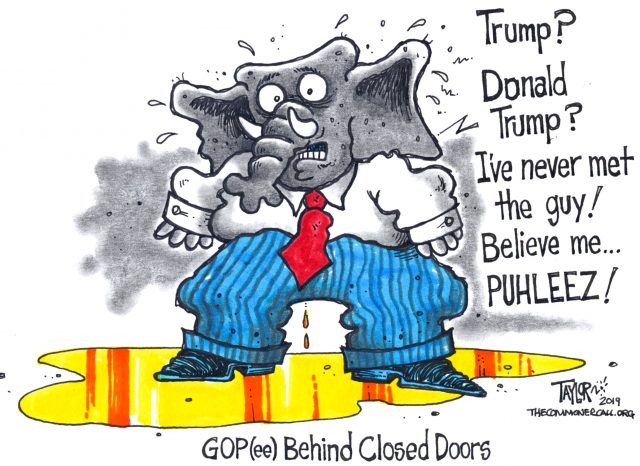 In the first batch of transcripts released from the impeachment investigation depositions, House Republicans make no attempt to defend Trump and fail to undermine the expert witnesses who testified.

Transcripts of closed-door testimony in the Trump impeachment investigation show a disturbing pattern of behavior by Republican lawmakers, not one of whom expressed concern about our national security, White House undermining of our diplomats or their safety.

Maria Yovanovitch, who got a middle of the night call from the State Department telling her to be on the next plane out of Kyiv, told in vivid detail how the Trump Administration’s actions are “hollowing out” our State Department and benefiting our adversaries, notably Russia.

Many Republican lawmakers are less concerned about loyalty to country than to their own grasp on power, their conduct shows.

She predicted that the damage already done will last for decades and may be irreparable, undoing the influence American won with blood and treasure by defeating its enemies in World War II and then building a global community to replace the war-ravaged past.

Then, bit by bit, the former ambassador was asked to flesh out her concerns. She testified of her worries that she may be under FBI investigation for who knows what, may be fired, may lose her pension.

Q: Do you have concerns about your personal safety?
A: So far, no.
Q: But you hesitate in saying, “So far, no,” or you condition that on what might happen in the future. So what…
A: Well, I would say a number of my friends are very concerned.

That was of no interest to Republicans on the House Permanent Select Committee on Intelligence. …

Senate Republicans ducked for cover on Tuesday after a top Trump administration diplomat revised his testimony in the House impeachment inquiry to acknowledge that U.S. aid to Ukraine was being withheld until the country promised to investigate a company tied to former Vice President Joe Biden’s son.

Gordon Sondland, a top donor to President Donald Trump who then picked him to serve as ambassador to the European Union, confirmed in an addendum on Monday to his testimony last month that he was involved in Trump’s attempted quid pro quo with Ukraine’s government after previously claiming he could not recall the details.

Sondland said his memory had been “refreshed,” and that he now recalled telling an aide to Ukrainian President Volodymyr Zelensky on Sept. 1 that “resumption of U.S. aid would likely not occur until Ukraine provided the public anti-corruption statement.” The statement, the Ukrainians were advised, ought to include Burisma, the company on whose corporate board Hunter Biden served while his father was vice president.

Sondland’s reversal, which only came after several other top Trump administration officials contradicted his initial testimony and put him in legal jeopardy, is likely to undercut Republican messaging about the impeachment inquiry. …

President Donald Trump has maintained he did nothing wrong when he pressured Ukrainian President Volodymyr Zelensky to investigate former Vice President Joe Biden during his infamous July 25th phone call.

However, damning testimony keeps undercutting the president’s defenses, as now European Union Ambassador Gordon Sondland has admitted under oath that that he explicitly told Ukraine that its military aid would not be released unless it agreed to launch investigations that would benefit the president politically.

Despite all this, the president continues to insist that his interactions with Ukraine have been “perfect” — and CNN’s Gloria Borger said on Tuesday that it’s creating a real dilemma for Republicans, whose preferred defense for the president is that he acted inappropriately but does not deserve to be removed from office. …

Read The Rest And 6-Minute Video