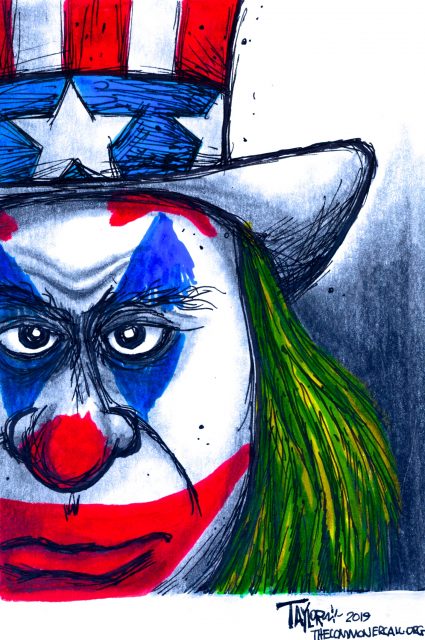 On Wednesday night I attended the New York Film Festival and witnessed a cinematic masterpiece, the film that last month won the top prize as the Best Film of the Venice International Film Festival. It’s called “Joker” — and all we Americans have heard about this movie is that we should fear it and stay away from it. We’ve been told it’s violent and sick and morally corrupt — an incitement and celebration of murder. We’ve been told that police will be at every screening this weekend in case of “trouble.” Our country is in deep despair, our constitution is in shreds, a rogue maniac from Queens has access to the nuclear codes — but for some reason, it’s a movie we should be afraid of.

I would suggest the opposite: The greater danger to society may be if you DON’T go see this movie. Because the story it tells and the issues it raises are so profound, so necessary, that if you look away from the genius of this work of art, you will miss the gift of the mirror it is offering us. Yes, there’s a disturbed clown in that mirror, but he’s not alone — we’re standing right there beside him.

A discomfiting question is posed: What if one day the dispossessed decide to fight back? And I don’t mean with a clipboard registering people to vote. People are worried this movie may be too violent for them. Really? Considering everything we’re living through in real life?

“Joker” is no superhero or supervillain or comic book movie. The film is set somewhere in the ‘70s or ‘80s in Gotham City – and the filmmakers make no attempt to disguise it for anything other than what it is: New York City, the headquarters of all evil: the rich who rule us, the banks and corporations for whom we serve, the media which feeds us a daily diet “news” they think we should absorb. This past week, a week when a sitting President indicted himself because, in true Joker style, he was laughing himself silly at Mueller’s and the Dems’ inability to stop him, so he just quadrupled down and handed them everything they needed. But even then, after ten days of his flaunting his guilt, he was still sitting with his KFC grease-stained nuclear codes in the Oval Office, so he told Captain Sketchy to fire up the helicopter, the sound of its blades revving up, meant only to alert the reporters to scurry outside for the daily “press conference” — Trump walks outside into the deafening cacophony of the whirlybird and publicly and feloniously asks the Peoples Republic of China to interfere in our 2020 election by sending him dirt on the Bidens. He and his magic carpet of hair then walked away and, other than the citizen howls of “CAN YOU BELIEVE THIS?!”, nothing happened. As “Joker” opens this weekend, Joker, Jr. Is still still sitting at John F. Kennedy’s desk in the Oval Office on the days he shows up to work, dreaming of his next conquest and debauchery.

The America that gave us Trump

But this movie is not about Trump. It’s about the America that gave us Trump — the America which feels no need to help the outcast, the destitute. The America where the filthy rich just get richer and filthier.

Except in this story a discomfiting question is posed: What if one day the dispossessed decide to fight back? And I don’t mean with a clipboard registering people to vote. People are worried this movie may be too violent for them. Really? Considering everything we’re living through in real life? You allow your school to conduct “active shooter drills” with your children, permanently, emotionally damaging them as we show these little ones that this is the life we’ve created for them. “Joker” makes it clear we don’t really want to get to the bottom of this, or to try to understand why innocent people turn in to Jokers after they can no longer keep it together. No one wants to ask why two smart boys skipped their 4th-hour AP French Philosophy class at Columbine High to slaughter 12 students and a teacher. Who would dare ask why the son of a vice-president of General Electric would go into Sandy Hook Elementary in Newtown, CT and blow the tiny bodies apart of 20 first-graders. Or why did 53% of White women vote for the presidential candidate who, on tape, reveled in his talent as a sexual predator?

As the news media stands by for the next mass shooting, you and your neighbors and co-workers have already been shot numerous times, shot straight through all of your hearts and hopes and dreams. Your pension is long gone. You’re in debt for the next 30 years because you committed the crime of wanting an education. You have actually thought about not having children because you don’t have the heart to bring them onto a dying planet where they are given a 20-year death-by-climate-change sentence at birth.

To stand and fight

The violence in “Joker”? Stop! Most of the violence in the movie is perpetrated on the Joker himself, a person in need of help, someone trying to survive on the margins of a greedy society. His crime is that he can’t get help. His crime is that he is the butt of a joke played on HIM by the rich and famous. When the Joker decides he can no longer take it — yes, you will feel awful. Not because of the (minimal) blood on the screen, but because deep down, you were cheering him on – and if you’re honest when that happens, you will thank this movie for connecting you to a new desire — not to run to the nearest exit to save your own ass but rather to stand and fight and focus your attention on the nonviolent power you hold in your hands every single day.

Thank you Joaquin Phoenix, Todd Phillips, Warner Bros. and all who made this important movie for this important time. I loved this film’s multiple homages to Taxi Driver, Network, The French Connection, Dog Day Afternoon. How long has it been since we’ve seen a movie aspire to the level of Stanley Kubrick? Go see this film. Take your teens. Take your resolve.

Why are many critics reacting so negatively to Todd Phillips’ “Joker”? Maybe because they can’t handle the truth.

Writer-director Todd Phillips’ “Joker” is a dark, enthralling, challenging, and seductive film about how a cruel and indifferent world can create a human monster. Joaquin Phoenix gives an Oscar-worthy performance in the starring role of Arthur Fleck, the man who eventually becomes the comic book superhero Batman’s archrival.“Joker” deftly weaves in elements of Martin Scorsese’s “Taxi Driver” and “King of Comedy” as well as “Network” and other films to great effect.“Joker” also rejects the simple storytelling conventions and archetypes of good and evil, or right and wrong, that are typical of the Hollywood superhero genre.

Neoliberalism as a form of gangster capitalism sells the lie that destroying the Commons, the social safety net, social democracy and a sense of shared human obligation — and cutting taxes on the rich — will somehow create economic growth, prosperity and “freedom” for all people.

The first signal to this comes early in the film when the city of Gotham — which is in the midst of a sanitation workers strike — is described as a place where “super cats” may have to be used to stop a plague of “super rats.” Many critics have condemned “Joker” as messy, boring, problematic, irresponsible, overly violent or perhaps even “dangerous.” This hectoring is a function of many things. But it is primarily rooted in how Phoenix and Phillips have offer an empathetic portrayal of a psychotic, antisocial character.

“Joker” is an especially challenging film because, for some viewers and critics, any effort to empathize or sympathize with Arthur Fleck and/or the Joker feels like an indictment of their own sense of virtue and self-righteousness. “Joker” causes other discomforts as well …