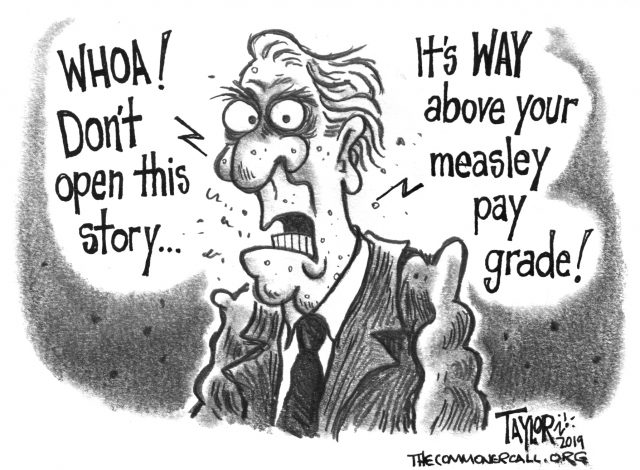 “The question of our time is this: will we tolerate it? Or will we take back our democracy from the oligarchs who run this country?”

For the first time in U.S. history, the 400 wealthiest Americans paid less in taxes last year than people in any other income group, thanks to decades of tax cuts and loopholes benefiting the rich.

A year after the Republican tax plan—often called the #GOPTaxScam by critics—was passed into law, the richest people in the country were subject to a 23 percent rate in local, state, and federal taxes.

As New York Times columnist David Leonhardt showed Sunday in a graphic accompanying his op-ed, “The Rich Really Do Pay Lower Taxes Than You,” the tax rate wealthy Americans are forced to pay has plummeted over the last seven decades while middle-income households have paid roughly the same share of their incomes each year.

The op-ed also refers to the fact that billionaire Warren Buffett was dismissed by economists and journalists in 2012 when he said his secretary paid a larger share of her income in taxes than he had to pay.

“Inequality is driven by policy choices, not some inherent laws of nature.” —Don Moynihan, Georgetown University

Office workers who pay a greater share of their earnings to contribute to services for the greater good than the wealthy CEOs of their companies pay are “the norm now,” Leonhardt wrote.

The op-ed was praised by critics of the U.S. economic system, including Sen. Bernie Sanders (I-Vt.).

“The question of our time is this: will we tolerate it?” tweeted the 2020 presidential candidate. “Or will we take back our democracy from the oligarchs who run this country?”

Leonhardt and other observers noted that the debate over whether to force wealthy Americans to pay their fair share versus protecting their wealth at all costs is centuries old, and those arguing for the former have triumphed in the past.

“Inequality is driven by policy choices, not some inherent laws of nature,” tweeted Don Moynihan, a professor at Georgetown University.

On the same day Leonhardt published his op-ed, CNBC released a report claiming millennials are “stingy” and are to blame for a sluggish economy.

In the opening paragraph, Pippa Stevens suggested both that millennials spend too much money on avocado toast and that they save too much of their income:

“Millennials—the selfie obsessed, avocado toast-loving generation—might be behind slower economic growth, according to a research note last week from Raymond James. This new generation, scarred by the financial crisis, is saving more than the free-spending boomers did before them, and it’s causing an economic imbalance.”

The article wasn’t the first to point to the spending habits of Americans between the ages of 23 and 38 as the reason fewer people are contributing to the real estate market.

“Hm. There’s also a theory that the 400 wealthiest people in America paid less taxes this year than ever in history,” tweeted one critic.

Ocasio-Cortez corrected CNBC, writing that millennials are “Not stingy. Broke.”

Instead of blaming young Americans for a slowing economy, tweeted Disney executive John Drake, “Why don’t the 400 wealthiest people in the U.S. (who received a giant tax cut) stimulate the economy through spending?”

These extreme disparities harm all of us. And we’ve waited too long for corporations to fix the problem on their own.

Back in the 1960s and into the 1970s, few American corporate chief executives pocketed more than 40 or 50 times what they paid their workers. That divide looks quaint by today’s standards, but back then business analysts like the famed Peter Drucker considered even those gaps much too wide.

Drucker called for CEO-worker pay ratios no wider than 20 to 1 or 25 to 1. Average Americans today, according to Harvard Business School researchers, consider an even narrower margin — no more than 7 to 1 — to be ideal.

The contrast between public sentiment and our current reality could hardly be starker.

A new Institute for Policy Studies report reveals that at the 50 publicly traded U.S. corporations with the widest pay gaps in 2018, the typical employee would have to work at least 1,000 years — an entire millennium — to earn what their CEO made in just one year.

Among America’s 500 largest publicly traded corporations, nearly 80% paid their CEO over 100 times what their median worker was paid in 2018. More than a quarter had gaps of 300 to 1 or wider.

Across the country, public outrage is driving support for policies to crack down on such obscenely large pay disparities. Just this week, presidential candidate Bernie Sanders released a plan for a federal pay gap tax.

The idea has been percolating around the state and local levels for years.

San Francisco voters will find a proposal for a similar tax on their March 2020 ballots. And policy makers in seven state legislatures have introduced similar proposals.

Some analysts consider the problem of runaway CEO pay just a concern for shareholders. But it’s a more fundamental problem than that: Skyrocketing CEO pay levels incentivize reckless executive decision-making like the kind that caused the 2008 financial crisis.

Congress recognized this in 2010 when it passed the Dodd-Frank financial reform law after the crash. That law included several CEO pay provisions, including a requirement that publicly held U.S. corporations annually disclose the ratio of CEO pay to median worker pay. The SEC finalized the disclosure regulation in 2015, and corporations began reporting their ratios last year.

Imposing tax penalties on companies with extreme gaps would do much more to discourage the kind of irresponsible behavior that led not only to the crash, but to other widespread social harm — from the opioid crisis to climate change.

Tax penalties on extreme CEO-worker pay gaps would also build on the living-wage movement by encouraging corporations to lift up the bottom and bring down the top of their wage scales. The more corporations shovel into executives’ pockets, the less they have for workers’ wages and other investments.

Like other “sin taxes,” these penalties would both discourage harmful practices while generating revenue for social needs. The new Institute for Policy Studies report finds that S&P 500 SPX, +0.02%  corporations as a whole would have owed as much as $17.2 billion more in 2018 federal taxes if they were subject to tax penalties ranging from 1 percentage point on pay ratios over 100 to 1 to 5 percentage points on ratios above 500 to 1.

Legislators at the city, state, and federal levels should consider policies to make corporations pay for big pay gaps. These extreme disparities harm all of us. And we’ve waited too long for corporations to fix the problem on their own.

The Trump administration is reportedly considering gutting regulations designed to prevent corporations from shifting profits overseas to avoid U.S. taxes, a move Democratic lawmakers and progressives condemned as yet another effort by the White House to enrich large companies at the expense of workers.

“One of the Trump administration’s top priorities has been making it as easy as possible for the wealthiest Americans and corporations to cheat and avoid taxes,” Sen. Ron Wyden (D-Ore.), the top Democrat on the Senate Finance Committee, said in a statement. “Rules preventing the offshoring of corporate profits should be strengthened—not weakened.”

“The same administration that tried to cut food stamps to save money wants to make it easier for companies to avoid paying taxes by hiding their profits offshore.”

Bloomberg reported late Tuesday that the Treasury Department is taking aim at “regulations intended to prevent American firms from lowering their U.S. tax bills by shifting income to their offshore branches that they can loan to their domestic branches and deduct the interest off their Internal Revenue Service bills.”

“The move could make it easier for companies to use accounting tactics to minimize their U.S. earnings and inflate their foreign profits, which are frequently taxed at rates lower than the current 21 percent domestic corporate levy,” Bloomberg noted. “The existing regulations were aimed at stopping U.S. companies from moving their headquarters to a lower-tax country, known as a corporate inversions.”

The Treasury Department, headed by former Goldman Sachs banker Steve Mnuchin, is considering repealing the Obama-era rules completely and replacing them “with something more business-friendly,” according to Bloomberg.

“The same administration that tried to cut food stamps to save money wants to make it easier for companies to avoid paying taxes by hiding their profits offshore,” tweeted O’Rourke.

Trump has condemned corporate offshoring of profits and jobs during speeches and rallies on the campaign trail, often singling out major companies by name. But, as Common Dreams reported, the $1.5 trillion tax cut legislation Trump signed into law in 2017 contained incentives for corporations to shift money overseas, prompting outrage from members of Congress and advocates for a progressive tax system.