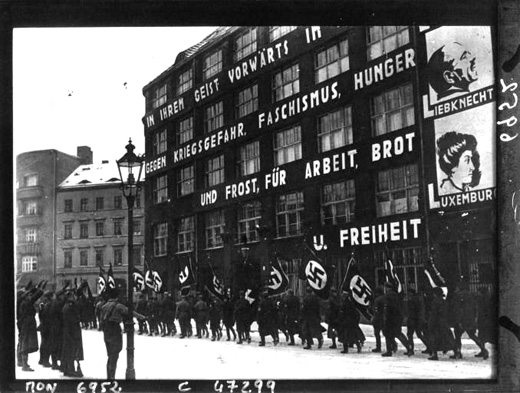 The struggle for labor rights continues, as we see daily in our own country.

On May 2, 1933, Adolf Hitler’s storm troopers occupied all trade union headquarters across Germany, and union leaders were arrested and put in prison or concentration camps. Many were beaten and tortured. All of the unions’ funds – in other words, the workers’ money – were confiscated. Former union officials were put on blacklists, preventing them from finding work.

This was one of the first acts of Hitler and the Nazis, who had just come to power in Germany a few months earlier, in January 1933. The German labor movement was one of the largest and strongest in the world, with some 7 million members at the time. The Nazis, much like some far-rightists in our own country then and now, saw that unions exercised significant power by representing workers’ interests and promoting a democratic humanitarian outlook among workers. The unions presented a barrier to the Nazi effort to control all areas of life and create a corporate-fascist state. Therefore, the Nazis made a priority of eliminating trade unions in Germany.

Collective bargaining and the right to strike were outlawed. Pay and working conditions were decided by Hitler officials. As a result, wages were frozen, and the average workweek increased by 20 percent in just a few years.

In their place, Hitler set up a “German Labor Front,” which included both employers and workers. Under the guise of providing benefits and services to workers, it supported the racist and pro-corporate Nazi agenda and spread Nazi propaganda among workers. Jews were banned from membership. Collective bargaining and the right to strike were outlawed. Pay and working conditions were decided by Hitler officials. As a result, wages were frozen, and the average workweek increased by 20 percent in just a few years.

Hitler’s destruction of unions was supported by important German business leaders and conservative politicians who shared the Nazi fear of a socialist revolution during the turbulent 1920s and early ’30s. Many of these people wanted restrictions on or complete abolition of unions, which they felt had become “too powerful.” This was one reason why many conservatives helped the Nazis come into power and joined or supported Hitler’s government.

Between 1933 and 1945 thousands of German trade unionists were arrested and imprisoned, and many were tortured, executed or sent to concentration camps.

Thus, the defeat of Hitler and liberation of Germany from Nazism represented a momentous victory for the working class of Germany and the rest of the world. But the struggle for labor rights continues, as we see daily in our own country.

(History of photo: Communists and trade unionists were among Hitler’s first targets. Here, Nazis rally in front of the headquarters of the German Communist Party (KPD) in 1933 in Berlin. Slogans on the building include: Against war, fascism, hunger … for work, bread, and freedom. Robert Sennecke, Biblioteque nationale de France, Wikimedia Commons)

This song is Copyrighted in U.S., under Seal of Copyright # 154085, for a period of 28 years, and anybody caught singin it without our permission, will be mighty good friends of ourn, cause we dont give a dern. Publish it. Write it. Sing it. Swing to it. Yodel it. We wrote it, thats all we wanted to do: Link to 2-Minute Video