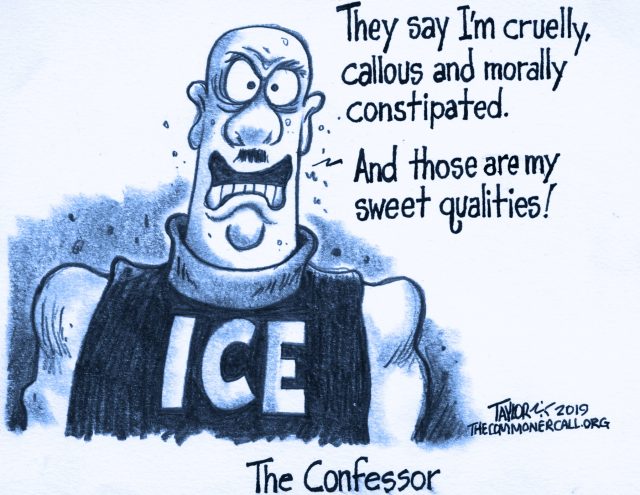 On Tuesday, the Trump administration reportedly ended its “medical deferred action” program, which allows immigrants with serious health problems to stay in the U.S. for up to two years beyond the terms of their visas to receive critical treatment. Just one day later, it announced that some children born to U.S. servicemembers and government employees stationed overseas will no longer automatically receive citizenship. The policy changes come days after the Justice Department asked the Supreme Court to allow the Trump administration to implement its rule banning almost all migrants from seeking asylum in the United States.

Amid these crackdowns, border wall construction began this week on federally protected lands in the remote Arizona desert, and many immigrant families remain separated due to Trump’s “zero tolerance” policy, which was supposed to have ended more than a year ago. We speak with Lee Gelernt, deputy director of the ACLU Immigrants’ Rights Project.

Court filings detail reports from teen girls who say they were given one sanitary pad a day. After that, they were forced to sit in soiled underwear and pants.

Migrant girls being held in detention centers near the U.S.-Mexico border are “visibly” bleeding through their underwear and pants while menstruating due to a lack of access to sanitary products, according to a new lawsuit.

The suit, filed earlier this week by 19 states, challenges the Department of Homeland Security’s new regulations for detaining migrant children. A 26-page investigation included in the lawsuit found that children were living in “appalling” conditions, according to Washington state Attorney General Bob Ferguson.

The investigation, conducted by a civil rights attorney for Ferguson’s office, found that detained children were living in extremely cramped quarters, were denied medical care and were not given enough basic necessities such as toothbrushes and soap. Some reported being put in cages as punishment.

Among the testimonials, migrant teenage girls discussed a lack of access to menstrual products including pads and tampons. …

After José arrived in El Paso and was sent back to Mexico, he lost touch with his family. He had no money, no phone and no real understanding of where he was.

In the early hours of Wednesday morning, at an airport in northern Virginia, José was finally reunited with his family.

They had been waiting five months for this moment. When José emerged, his mother, Marta, grabbed her son tight and wouldn’t let go. She could not stop crying.

José, who is 28 but has the mental capacity of a four-year-old, had made it to Virginia after a torrid, at times terrifying, five months at the hands of Donald Trump’s brutal immigration policy.

He and his cousin had arrived in El Paso, in south-west Texas, in March, seeking asylum. José was carrying a note from his doctor, spelling out his cognitive disability. Despite that, José was separated from his cousin, who had been his carer in their home country of El Salvador, and sent back to Mexico alone. The Guardian is using first names only for José and his family for their security.

José was another victim of Trump’s Remain in Mexico program, which has turned back tens of thousands of asylum seekers at the border since it was introduced in March. Forced to return to already crowded cities, many have fallen victim to organized crime. People have been raped and killed. José himself was kidnapped and extorted.

It made the reunion at Dulles airport, 30 miles west of Washington DC, particularly emotional. …

Ajay Kumar, who is on a hunger strike while detained in El Paso, is receiving ‘abysmal’ treatment, doctor said in court documents.

The life of an Indian asylum seeker on hunger strike in US detention is at risk because of the “abysmal” treatment he is receiving from US Immigration and Customs Enforcement (Ice), which began force-feeding him two weeks ago, a doctor warned in court documents filed this week.

Dr Parveen Parmar, chief of the division of global emergency medicine at the University of Southern California, said in an affidavit that the 33-year-old asylum seeker, Ajay Kumar, is receiving “the worst medical care I have seen in my 10 years of practice”.

Kumar is one of three Indian men on hunger strike in an El Paso immigration detention center who is currently being force-fed – an act medical bodies and human rights groups have argued represents a form of inhumane and degrading treatment.

Three other men were also part of the hunger strike, which began on 8 July, but advocates do not know their current status because two of them were deported and a third was transferred to a detention facility in Florida. A seventh man has ended his strike.

The men have been in detention for nearly a year, or longer. The prolonged detention, coupled with their fear of political persecution for their activism in India, prompted the hunger strike.

It is only the second time advocates have documented force-feeding in Ice detention – the first was in January this year, when at least nine Indian men went on hunger strike.

The cases have been shrouded in secrecy, but on Tuesday, a federal judge made Parmar’s signed affidavit public, revealing the doctor’s concerns.

“As is clear from my review of his medical record, his health is at risk in Ice custody not solely from his hunger strike, but from the truly substandard medical care he is receiving in detention,” Parmar wrote.

After Parmar reviewed “roughly 471 pages” of Ice medical records and court testimony from an unnamed Ice doctor, she concluded the Ice doctor does not fully understand the consequences of prolonged starvation and lacked knowledge about basic medical facts. In separate court documents, the doctor is identified as Michelle Iglesias.

Ice did not respond to questions about its doctor or the hunger strikes. …

The Trump Administration plans to divert $271 million in federal disaster aid to beef up funding for ICE detention facilities at the U.S.-Mexico border.

The Department of Homeland Security explained this in a letter to Congress—not seeking permission, but simply informing them of the change. Such a move is in defiance of Congressional authority to allocate where funding can go.

The Trump Administration created this crisis at the border, which has forcibly kept families apart and locked children in cages. They are now saying they need more funds to handle the backlog of asylum seekers, and to keep them indefinitely detained.

As hurricane season begins to ravage the Gulf Coast, taking money away from emergency preparedness is even more short-sighted and outrageous. This is also not the first time the Trump Administration has tried this—they diverted $9.75 million in September 2018.

Sign the petition: Denounce Trump for robbing FEMA funds to lock up more kids in cages and pursue its inhumane policy at the U.S.-Mexico border.

Our Message to Congress :

I am outraged that Homeland Security would steal $271 million during hurricane season from emergency preparedness to fund more ICE detention centers at the border. I expect Congress to do its part to rein in such outrageous behavior.