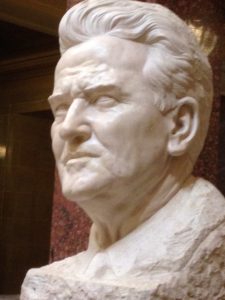 In Democracy in America, Alexis de Tocqueville offered a prescient warning for “the friends of democracy”. In a chapter called “How Aristocracy Could Issue from Industry” he observed that industrial capitalism would create economic inequality between owners and wage-workers and divide them culturally, morally, and socially.

With the rise of industrial capital, Tocqueville feared there would be no genuine relationships between these two emergent classes. “If ever a permanent inequality of conditions and aristocracy are introduced anew into the world, one can predict they will enter through this door.”

“Antitrust, regulation, tax, democracy reforms – these were rules that made industrial capitalism work, and kept it from destroying democracy. Even though it’s been gathering dust for decades, this Gilded Age and Progressive Era playbook is the essential starting point for reform today.”

Almost 200 years later, Tocqueville’s fears seem prescient. We live in a second Gilded Age – an era of extreme economic inequality and monopoly power. Wages for workers have been largely stagnant for a generation, while CEO pay has skyrocketed. A small number of firms now dominate many sectors of the economy. And the consequence for democracy is dire: study after study in political science shows that government is responsive to the preferences of the wealthy and their interest groups, but not to ordinary people. This creates a vicious cycle in which the wealthy and corporations can rig the political rules to benefit themselves. And the rigged system only makes them wealthier and more powerful. The danger of “a permanent inequality of conditions and aristocracy” is upon us.

Can democracy survive what capitalism has unleashed? It will depend on what policymakers do and especially what the people – organized on the streets and at the ballot box – force them to do.

At this critical moment, with the age of neoliberal capitalism coming to an end, I am optimistic we can choose wisely and rescue democracy. I have hope because many of the problems of capitalism are not entirely new and because the playbook for taming industrial capitalism already exists. More than a century ago, when industrial capitalism was on the rise, reformers and intellectuals outlined – and adopted – a variety of structures to keep the feral beast within a democratic enclosure. …

(Commoner Call photo by Mark L. Taylor, 2019. Open source and free to use with link to thecommonercall.org )