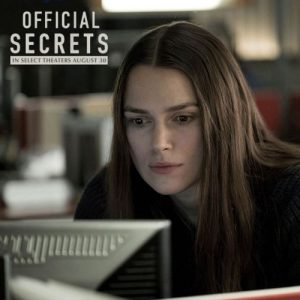 [Editor’s Note: The disastrous Iraq War rolled forward and was enabled by government deceit and malfeasance, bitter failure and active complicity of the British and American corporate media. In the midst of the craven battalions of government and corporate media a few brave souls stood out. Here’s the story of a courageous 27 year-old intelligence worker who stood for truth and principle. — Mark L. Taylor]

In 2003, Katharine Gun, a young specialist working for Britain’s Government Communications Headquarters, exposed a highly confidential memo that revealed the United States’ collaboration with Britain in collecting sensitive information on United Nations Security Council members in order to pressure them into supporting the Iraq invasion. Gun leaked the memo to the press, setting off a chain of events that jeopardized her freedom and safety, but also opened the door to putting the entire legality of the Iraq invasion on trial. Acclaimed Pentagon Papers whistleblower Daniel Ellsberg described Gun’s action as “the most important and courageous leak I have ever seen.”

Gun’s incredible story is depicted in the new film “Official Secrets,” which premieres in the U.S. August 30. We speak with Katharine Gun; the British journalists who reported on Gun’s revelations in The Observer newspaper, Martin Bright and Ed Vulliamy; and Gavin Hood, director of “Official Secrets.”

We speak with a British whistleblower whose attempts to expose lies about the Iraq invasion was called “the most important and courageous leak” in history by acclaimed Pentagon Papers whistleblower Daniel Ellsberg. Her name is Katharine Gun.