Greta Thunberg. This time last year she was unimaginable. Then, pretty much from nowhere, there she was: small and slight, a girl just turned 16, the way-too-young odd person out on a panel of adults sitting in front of the world’s economic powers at Davos last January. Unshowy and serious, careful, firm, she said it. Our house is on fire.

The ancient Greeks had a word for this: parrhesiastes. It means a person who speaks truth to power: you should not be behaving in this way. Don’t. More specifically it suggests someone in whom directness of expression and access to truth coincide; and it means someone of very little power who’s risking everything – because they can’t not, there’s no option – to speak ethical truth to powers so entrenched that they’re close to tyrannical, because telling this truth is about moral law. “Some people, some companies, some decision-makers in particular know exactly what priceless values they have been sacrificing to continue to make unimaginable amounts of money, and I think many of you here today,” she said to the World Economic Forum conference, “belong to that group of people.”

At 11 she stopped speaking, in protest; now she sees that “selective mutism” as the first step to understanding the power and necessity of speaking at all.

Thunberg is Swedish; she was born in 2003 and lives in Stockholm with her younger sister Beata, her mother, a singer, and her father, an actor. There’s a picture of the family somewhere online taken when she was much younger; her mother and father are smiling broad old-fashioned smiles at the camera – doing what you do when you have your photo taken. Both the children, only waist- and knee-high, regard the lens with utter seriousness and inquiry. At eight years old, Greta Thunberg heard about climate change. She wondered why no one was doing anything to stop it. At 11 she stopped speaking, in protest; now she sees that “selective mutism” as the first step to understanding the power and necessity of speaking at all.

‘The grown-ups have failed us.’

She was 15 when she began taking days off her education to sit in front of the Riksdag in Stockholm, declaring she’d do this till Sweden reduced carbon emissions in line with the Paris agreement. She gave out leaflets: “I am doing this because you adults are shitting on my future.” She made a couple of speeches internationally that tapped into a profound unspoken understanding in young people; in just six months, nearly one and a half million children across the world were schoolstriking for action on climate change. Her Instagram post on these strikes reads: “Time is much shorter than we think. Failure means disaster. The grown-ups have failed us. And since most of them, including the press and the politicians, keep ignoring the situation, we must take action into our own hands. Starting today. Everyone is welcome. Everyone is needed. Please join in.”

Earlier this month Opec declared Thunberg, and with her the other young climate activists, the “greatest threat” to the fossil fuel industry. Thunberg tweeted them her thanks. “Our biggest compliment yet.” Hers is a voice totally unlike the world’s usual power-cacophony: clean, simple, inclusive, the voice of someone refusing to beguile. She talks ethics to politics without flinching. She cuts through the media white noise and political rabble-rousing to get to the essentials. This is a communal voice and Thunberg is its lightning conductor, and no wonder: when you hear her speak or you read her speeches you know you’re in the presence of the opposite of cynicism – of a spirit, in fact, that rebuffs cynicism and knows that the way we act, every single one of us, has transformatory impact and consequence. “The real power belongs to the people.”

This voice lets us know we’re in disavowal, and that we’d better wake up. Then it tells us, clear as anything, how to do this. 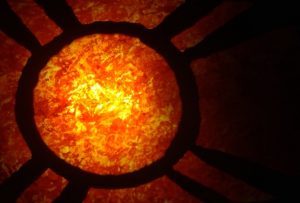 As meteorologists warned Thursday that temperatures above 100°F are expected to impact two-thirds of the country this weekend, U.S. government scientists revealed that last month was the hottest June ever recorded—bolstering calls for radical global action on the climate emergency.

The revelation came in a new monthly climate report from the National Oceanic and Atmospheric Administration. Scientists at the agency’s National Centers for Environmental Information found that “the global land and ocean surface temperature departure from average for June 2019 was the highest for the month of June in the 140-year NOAA global temperature dataset record, which dates back to 1880.”

Meteorologist Jeff Masters, co-founder of Weather Underground, explained that “the global heat in June is especially impressive and significant given that only a weak (and weakening) El Niño event was in place. As human-produced greenhouse gases continue to heat up our planet, most global heat records are set during El Niño periods, because the warm waters that spread upward and eastward across the surface of the tropical Pacific during El Niño transfer heat from the ocean to the atmosphere.”

According to NOAA, “Regionally, South America, Europe, Africa, the Hawaiian region, and the Gulf of Mexico had their warmest June in the 110-year record.” Central and Eastern Europe, North-Central Russia, Northeastern Canada and Southern parts of South America endured the most notable departures from average June temperatures.

And, as Masters noted, that high heat came with consequences:

“Three billion-dollar weather-related disasters hit the Earth last month, according to the June 2019 Catastrophe Report from insurance broker Aon: a severe weather outbreak in Europe ($1.1 billion), flooding in China ($9+ billion, including losses up until July 16), and a drought in India ($1.75 billion). In addition, severe weather outbreaks in the U.S. in late May and mid-March accumulated more than $1 billion in losses by the end of June, bringing the 2019 tally of billion-dollar weather disasters to 14.”

Five of the disasters documented by Aon were in the United States. NOAA, in the climate anomalies and events section of its report, noted that higher than average rainfall across the Mississippi and Ohio Valleys and East Coast contributed to destructive flooding in those areas. Experts warn that as human behaviors continue to warm the planet, extreme weather events will become more intense and common.

NOAA scientists found that January through June tied with 2017 for the second-highest average temperature ever recorded in that six-month period over the past 140 years. Though 2016 still remains the hottest first six months of the year on record, last month beat 2016’s June temperature average by 0.04°F, with an average global temperature 1.71°F above the 20th century average.

Jonathan Erdman, a senior meteorologist at The Weather Channel, wrote Thursday that although the increases may seem small, “ultimately, what’s most important is not whether a given month is a fraction of a degree warmer or colder; rather, it’s the overall trend, which continues its upward climb since the late 1970s.”

(Commoner Call photo by Mark L. Taylor, 2019. Open source and free for non-derivative use with link to www.the commonercall.org )