“I got to know him very well because we were both on 60 Minutes, we were stablemates. We did well that night.”

It turns out, in spite of all the Trump denials, there were MANY contacts between the Trump campaign and Russians. The Moscow Project documents 272 contacts.

I bring this up because this Wednesday, July 24, 2019, beginning at 8:30 AM ET former special counsel Robert Mueller will appear before both the House Judiciary and House Intelligence committees. This is officially titled, “Oversight of the Report on the Investigation into Russian Interference in the 2016 Presidential Election: Former Special Counsel Robert S. Mueller, III”.

Note the tone taken by the New York Times in advance of the hearings:

The New York Times is not overstating. Test your own top of the head political review – inhumane Trump administration treatment of immigrants, Trump racist rants, drum-beating with Trump’s declarations and threats against Iran, upcoming Dem televised debates on Tuesday and Wednesday evenings?

Trump’s attorney general and presumptive personal attorney William Barr has done his best to defang Mueller’s evidence of Trump and campaign Russian coordination and obstruction of the investigation. Barr lied his own summary of the Report in contradiction of Mueller’s own summary. Barr delayed, repeated Trump’s distortions and lies and fed into a strategy of investigating the investigators by citing conspiracy ideas of the history of Trump’s criminal actions and the rationale for and conduct of the investigation.

Trump and Barr are likely happy with the result – support for impeachment is drying up against Trump’s constant carnival of daily crises.

“One way or the other, the Mueller hearing will be a turning point with respect to the effort to hold Donald Trump accountable for his reckless, degenerate, aberrant and possibly criminal behavior,” said Representative Hakeem Jeffries of New York, the House Democratic Caucus chairman and a member of the Judiciary Committee. “After the hearing, we will be able to have a better understanding of the pathway forward concerning our oversight responsibilities and the constitutional tools that are available to us.”

Are Republicans worried? Apparently not, after all, Mueller is no ‘(former independent counsel investigating President Clinton) Ken Starr’:

“Republicans are expressing little concern about the Democrats’ strategy. Mr. Mueller’s style and his prosecutorial conclusions will “blow up in their face,” said Representative Steve Chabot, Republican of Ohio, who helped prosecute the impeachment case against Mr. Clinton.

“Back then, Starr came out pretty clearly and said that he felt there were impeachable offenses that had been committed,” Mr. Chabot said. “Now we have a special counsel who, at this point, is saying no.”

Given the public support for impeachment at 21%, the support of (only?) 90 House Democrats and Mueller’s style what should we expect?

To date Mueller has had one public appearance, a 9-minute press conference with no follow-up questions. It had impact – at the time, the power of his words moved the needle in support of impeachment. Now?

“It is not that that there will be a big, dramatic new revelation necessarily, we’re not expecting that,” a Democratic staffer on the Judiciary Committee said Thursday in a briefing ahead of the hearings. “What’s important is there is truly shocking evidence of criminal misconduct by the president — not once but again and again and again — that would result in any other American being criminally charged in a multiple count indictment.”

Mueller Hearings: The Questioning Strategies That Lawmakers Could Implement

In the 5-minute audio interview Dean predicts Dems will stick to a 5-minute per committee member format for questioning Mueller. Dean reminds us that as politicians, it’s hard to expect anyone to sacrifice their own exposure but he does also share that Dems are taking the hearings seriously including rehearsals.

What I Would Ask Robert Mueller

Comey works to paint a picture of a Trump campaign open for business, inviting assistance from Russia. His opening question (referencing Volume 1, page 5 “Russia Contacts with the Campaign”) would be: “Did you find that there were a series of contacts between the Trump campaign and individuals with ties to the Russian government?” Comey ends his Volume 1 questions with, “Did the Trump campaign report any of its Russian contacts to the FBI?”

Comey focuses on Trump’s demands on White House counsel Don McGahn to obstruct the investigation by having Mueller fired and then demanding that he lie about the pressure (Volume 2, page 6).

Comey’s strategy is to bring the big picture to life – the willingness and the complicity to accept election assistance from Russia, the failure to ever notify the FBI as required by law and Trump’s subsequent efforts to obstruct the investigation.

He’d happily do it again

Former FBI Deputy Director Andrew McCabe coaches getting at the question of whether Trump is or is not above the law.

““What he won’t do is go beyond the four corners of the report, as he’s already said in his own statement,” said McCabe. “I think one of the more frustrating parts of the report for people is he didn’t come out and address the hypothetical questions of if the president was not the president and just a private citizen, would he be charged with obstruction. So if that’s the place Congress wants to get to, there are many, many ways they can get very close to that. …

“For instance, ‘does DOJ typically seek to convict subjects of obstruction with evidence like this?’”

“If posed with that direct question, what do you think he would say?” Berman asked.

When asked “isn’t that the ball game?”, McCabe offers, “I think it’s an enormously significant point.”

Trump to date has gotten away with it all with major assistance from Bill Barr. Both Trump and Donnie Jr. have already benefited from a proprietorial standard of whether they knew they were breaking the law in their interactions with Russians, assistance and the subsequent investigation. They benefited from a conclusion that it was not possible to prove or that the ‘value’ of assistance could not be determined. This was key to Donnie Jr.’s June 2016 meeting with Russians over “if it’s what you say I love it” when offered Russian dirt on Hillary. But it’s also key to Trump dodging another instance of breaking the law with his campaign hush money payments to porn stars. This is part of the rationale for long-time Trump lawyer Michael Cohen’s 3-year federal sentence but Bill Barr has now ended any further investigation, no more charges are to be brought. Trump dodges the law again.

Is Trump above the law? Let’s say it’s an open question. An open question against a back-drop of an opinion from Paul Nailer, who used to help write the National Intelligence Estimate threat assessment:

“I used to work in US intelligence advising presidents on risk. The biggest threat to our country today is the Republican Party.”

The author’s sub-head is: Donald Trump and his coterie of criminals have done more in two years to weaken the United States than the Soviet Union was able to achieve in decades.

With Tuesday and Wednesday evening Dem debates bookending the hearings, candidates can communicate their views on impeachment. But for right now, the question remains…

Is Trump above the law? Maybe this is a more clear threat assessment. 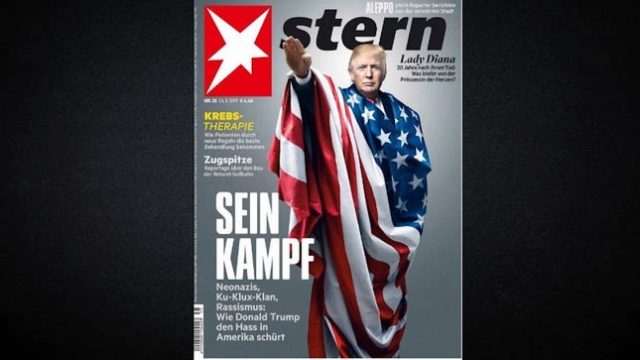