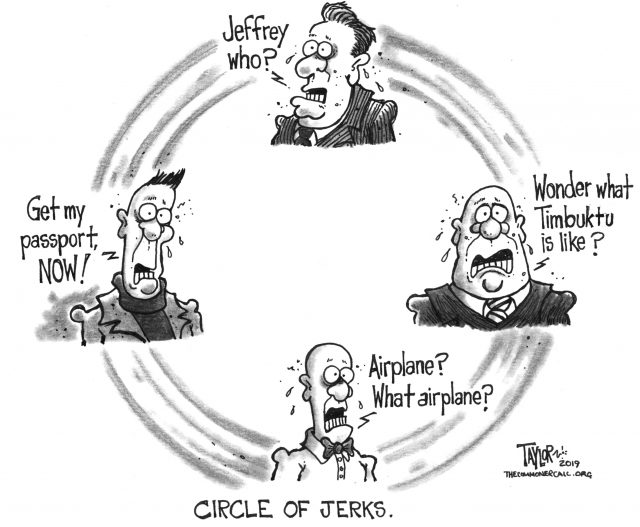 Wherever these questions lead prosecutors and reporters must follow. And the public must demand real accountability, no matter the answers.

The wealthy and well-connected financier and registered sex offender was arrested this week in New York on accusations of child sex trafficking. He just may bring a lot of bad men – and a few bad women – down with him.

Epstein allegedly groomed and recruited dozens of underage girls, many of them vulnerable runaways, for sex with him and his friends. Despite being caught by authorities, Epstein has largely evaded serious punishment. Thanks to heroic reporting by Julie K Brown at the Miami Herald, Americans learned that back in 2008, Epstein was given an exceptionally favorable plea deal by then-prosecutor Alex Acosta – now Trump’s secretary of labor. The deal was shamefully hidden from Epstein’s victims, and while it forced Epstein to register as a sex offender, it allowed him near-total freedom for the 13 months he was technically in jail – he was allowed to leave the facility to work in his luxurious private office instead of serving life in prison.

The only way forward is to demand accountability from Epstein, his co-conspirators, and his enablers, without exception and without excuse. Who knew what was going on?

It’s unclear why Epstein was given such favorable treatment. But given who his friends are, speculation has run rampant that his powerful connections (and the potential wrongdoings of other powerful men) may have had a hand in keeping him in relative freedom.

Epstein’s friends and contacts include President Donald Trump, President Bill Clinton, Prince Andrew, and high-powered attorney Alan Dershowitz, among many others. In 2002, Trump characterized Epsteinas a “terrific guy” who enjoyed the company of girls “on the younger side.”

In the immediate aftermath of Epstein’s arrest, Twitter exploded with political gotchas. …

The sex trafficking case against Jeffrey Epstein, unveiled by prosecutors from the southern district of New York in Manhattan, may have implications for many men who have come in and out of Epstein’s social circle.

Over the weekend, Christine Pelosi, a Democratic National Committee official and the daughter of House speaker Nancy Pelosi, warned darkly of a “horrific” case that could include names that have come up repeatedly in connection with the billionaire Wall Street financier.

After Epstein’s arrest on Saturday at a private airport in New Jersey, Pelosi’s daughter tweeted: “This Epstein case is horrific and the young women deserve justice. It is quite likely that some of our faves are implicated but we must follow the facts and let the chips fall where they may – whether on Republicans or Democrats.”

Epstein has counted Donald Trump, Bill Clinton and Prince Andrew among his friends and associates. …

“Connections on both sides…they all knew.”

The financier was arrested over the weekend on sex trafficking charges, and the “Morning Joe” host said Epstein’s crimes were widely known in Manhattan, but his money and connections shielded him from serious consequences — even after he was arrested a decade ago but allowed to enter a highly unusual plea agreement by Trump’s future labor secretary, Alex Acosta. …

With President Donald Trump caught up in a child sex trafficking scandal, the White House is terrified that House Democrats will hold public hearings where television stations would broadcast heartbreaking stories from victims.

Trump is a longtime friend of Epstein and Trump’s Labor Secretary, Alex Acosta, was the prosecutor criticized for Epstein giving a sweetheart deal.

“Officials at the White House, which has not made any public statements about the Epstein indictment, are nervous that Democrats will encourage women allegedly abused by Epstein to testify publicly before Congress, drawing attention to Acosta’s work on the plea deal, according to current and former administration officials,” The Washington Post reported Monday.

“Trump has no immediate plan to force out or fire Acosta,” The Post reported, citing two White House officials. …

Attorney General William Barr recused himself publicly from the Jeffrey Epstein case yesterday[7/9], but today [7/10] new reports say he will not recuse himself in the federal sex-trafficking case. Lawrence O’Donnell discusses with former federal prosecutor Mimi Rocah and Zerlina. …

“A joke and hypocrisy and just an extraordinary offense. I mean, these are young girls who are being sexually assaulted and they don’t care. And they’re siding with rich, powerful men against these kids, and the fact that they’re not blinking twice is such an indictment.”

— Peter Wehner, conservative writer and former official in Reagan and both Bush administrations on response of Republicans to Labor Secretary Acosta’s role in Jeffery Epstein case.