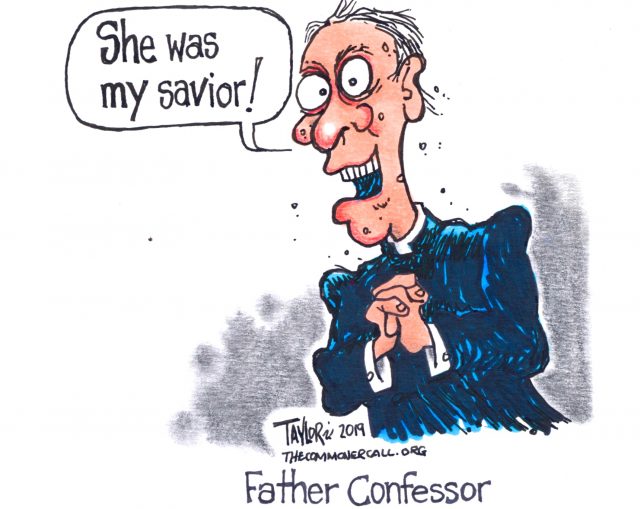 “I think the whole cloak of secrecy with the Catholic Church needs to be exposed.”

[Harris’s presidential campaign did not respond to multiple requests for comment from The Intercept.]

KAMALA HARRIS, SURROUNDED by thousands of cheering supporters, kicked off her presidential campaign in Oakland earlier this year, declaring that she has always fought “on behalf of survivors of sexual assault, a fight not just against predators but a fight against silence and stigma.”

Fighting on behalf of victims of sexual abuse, particularly children, has been central to Harris’s political identity for the better part of three decades. Harris specialized in prosecuting sex crimes and child exploitation as a young prosecutor just out of law school. She later touted her record on child sexual abuse cases and prosecuting pedophiles intelevision advertisements, splashy profiles, and on the trail as she campaigned for public office.

But when it came to taking on the Catholic Church, survivors of clergy sexual abuse say that Harris turned a blind eye, refusing to take action against clergy members accused of sexually abusing children when it meant confronting one of the city’s most powerful political institutions.

The newspaper revealed that shortly after being elected, Harris had worked with church officials and other prosecutors to conceal the clergy records.

When Harris became San Francisco district attorney in 2004, she took over an office that had been working closely with survivors of sexual abuse to pursue cases against the Catholic Church. The office and the survivors were in the middle of a legal battle to hold predatory priests accountable, and Harris inherited a collection of personnel files involving allegations of sexual abuse by priests and employees of the San Francisco Archdiocese, which oversees church operations in San Francisco, and Marin and San Mateo counties.

The files had been compiled by investigators working under the direction of Terence Hallinan, the radical district attorney who Harris ousted in a contentious election campaign. Hallinan’s team had prosecuted cases of abuse that had occurred decades earlier and had gathered evidence as part of a probe into widespread clergy sexual misconduct.

Just six months before Harris took office, a U.S. Supreme Court decision overturned a California law that had retroactively eliminated the statute of limitations for criminal prosecution of child molestation cases. That shifted the focus to holding predators among the clergy accountable through civil cases and through a broader effort to bring attention to predators who had been shielded by the church.

Hallinan believed that the clergy abuse files were a matter of public record; Harris refused to release them to the public. …

Read the Rest and 5+-Minute Video

Former priest Matthew Fox discusses the book In the Closet of the Vatican, which depicts a “ring of lust” at the highest levels of the Church, and the campaign to hypocritically “weaponize” sexuality and bring down Pope Francis – on Reality Asserts Itself with Paul Jay.

A new study says that the church poured at least $10.6 million into lobbying efforts in eight Northeastern states.

The Catholic Church has spent at least $10.6 million lobbying against legislation that gives sexual abuse victims more time to seek justice in courts ― and that’s in the Northeast alone, according to a new report.

The law firms ― Williams Cedar, Seeger Weiss, Abraham Watkins, and Simpson Tuegel ― have collectively represented more than 300 survivors of clerical sexual abuse across the country. They obtained the data about the church’s lobbying efforts from public filings.

Of the eight states studied, the largest amount of lobbying money ― $5.3 million ― appears to have been spent in Pennsylvania. …