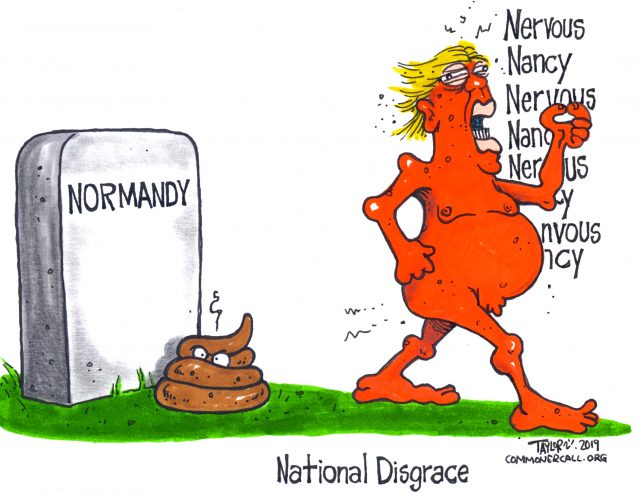 He called people names and disrespected the dead for Fox News at Normandy, just like we knew he would.

How do we adequately commemorate our war dead? The soldiers and sailors and airmen and women who gave their lives in places like Normandy, and Anzio, and Palermo, and Inchon, and Khe Sanh, and Ia Drang, and Fallujah, and Sangin? How do we pay homage to our fellow citizens who were ordered to a foreign land to fight for their country and lost their lives doing it?

We have Memorial Day ceremonies every year at veterans cemeteries at home and abroad. We have monuments, like the Vietnam War Memorial on the Mall in Washington, D.C., and the memorials to the dead of World War II and Korea. And we have anniversaries like the one that just happened in Normandy, France, to commemorate the landing on D-Day, June 6, 1944, now 75 years ago.

The bodies of the dead, ordered to their deaths by men like Eisenhower and my grandfather, bodies now disrespected by the likes of Donald Trump.

We’ve had them before. Thirty-five years ago, on June 6, 1984, the 40th anniversary of D-Day, President Ronald Reagan went to Normandy and gave a speech commemorating the dead which many think a classic. Twenty years before that, Dwight David Eisenhower, who commanded Allied forces on D-Day in 1944 and gave the order for the invasion, went to Normandy and gave an interview to Walter Cronkite of CBS News on the anniversary of the landings.

As they walked through the graveyard, Cronkite read some of the names and units of the dead on the headstones, simple crosses and Stars of David standing side by side in a vast field of grass. There were more than 9,000 buried there, Cronkite said. Eisenhower interrupted him to say that the graves at Normandy represented only 40 percent of those killed, as 60 percent of the bodies that were identified were taken home. Buried at Normandy are some of the bodies that were identified, and all of those who couldn’t be identified. The names of more than 1,500 missing soldiers and sailors are engraved on the Wall of the Missing in a garden at the cemetery, Eisenhower told Cronkite.

Then the two men sat down on a wall, and with the graves visible in the background Eisenhower explained what happened at Normandy on D-Day, and why: “These men came here — the British, and our other allies, Americans — to storm these beaches for one purpose only,” Eisenhower said, his voice level, but his countenance grim. “Not to gain anything for ourselves, not to fulfill any ambitions that America had for conquest, but just to preserve freedom — systems of self-government around the world. Many thousands of men have died for ideals such as these.” …