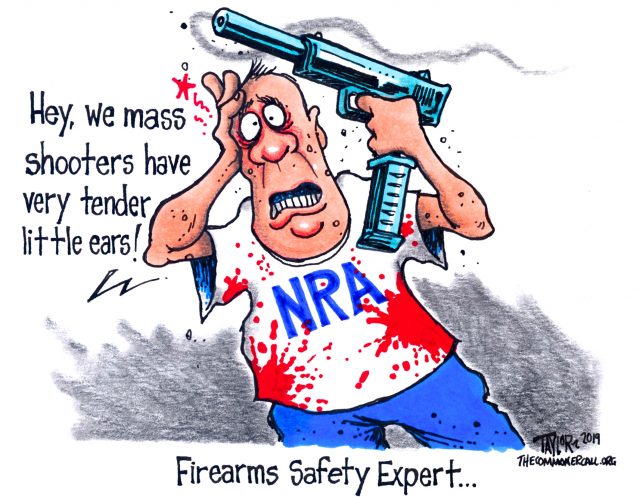 The mass shooting in Virginia Beach last week has reinvigorated the debate over the regulation of gun suppressors — also known as silencers — which muffle the sounds of gunfire.

The shooter behind the attack, which left 12 people dead on Friday, used a suppressor on his firearm. One survivor described the sounds of his weapon as something like a nail gun.

Gun-control advocates have argued that suppressors add to the threat of gun violence and have heavily criticized the National Rifle Association for its push to roll back regulations on them.

“Silencers put law enforcement and civilians at risk.” Rep. Val Demings (D-Fla.), who formerly served as Orlando’s chief of police, said Monday on Twitter. “The NRA’s embrace of them is a cynical cash-grab.”

“When people hear the sound of a gunshot, they know to run, hide or call the police,” Shannon Watts, founder of Moms Demand Action for Gun Sense in America, said on Twitter. “Hearing and identifying a gunshot can mean the difference between life and death.”

On Sunday, when asked if silencers should be restricted, President Donald Trump said, “I don’t like them at all.” …

“Bystanders can run from the gunfire only if they know where it is coming from.”

Friday’s mass shooting in Virginia Beach, in which 12 victims and the shooter were killed, will likely join the drumbeat of mass murder stories that have become so common they barely register as news anymore. The apparent shooter, a 40-year-old man named DeWayne Craddock, resigned his job early Friday and then showed up at his office, apparently intent on killing as many people as possible before the police, after a protracted gun battle, killed him as well.

But this shooting has one detail that sets it apart from the numbing litany of mass shootings: Craddock had a silencer on his weapon, that device we’ve all seen on TV that the gun lobby insists on calling a “suppressor.”

Silencers, by design, make it much harder to identify where shots are coming from, making it harder for victims to escape and for police to find an active shooter.

“He obviously knew what he was doing when he had extended magazines, he had suppressors. He was coming to kill as many people as possible, which is chilling,” Shannon Watts of Moms Demand Action told Salon.

Craddock likely jumped through the numerous hoops created by the 1934 National Firearms Act, and his use of a silencer makes it quite clear he thought it would make it easier to kill more people. But gun industry shills are now fanning out across the media, denying to every journalist they can pin down that the silencer made any difference. That claim is hard to square with the reports from shooting witnesses, however, many of whom seemed confused about what was happening or how close it was. One person reportedly mistook the sound for a nail gun. …