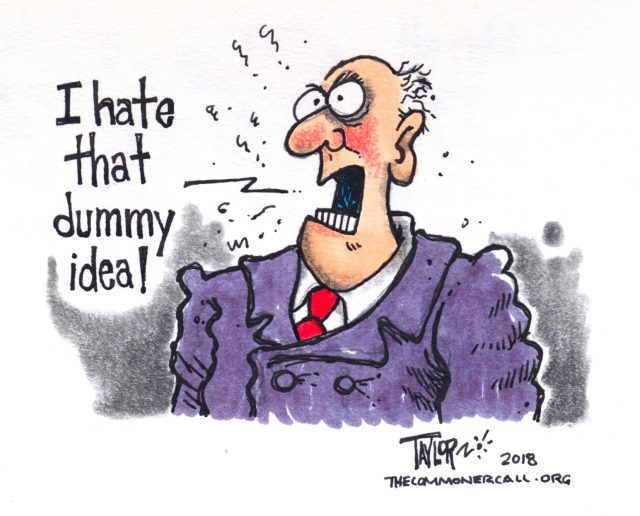 “Employee-owned companies will not provide starvation wages to workers and huge compensation packages to CEOs. They will not allow for unsafe working conditions.”

According to the Washington Post‘s Jeff Stein—who first reported on Sanders’s plans—the Vermont senator is developing a proposal that would force large companies to “regularly contribute a portion of their stocks to a fund controlled by employees, which would pay out a regular dividend to the workers.”

Sanders is also set to introduce a plan that would require corporations to “let workers control a share of their boards of directors,” Stein reported.

The two proposals, Stein wrote, “would give millions of workers the type of workplace influence typically reserved for shareholders and executives.”

Sanders, a 2020 Democratic presidential candidate, said in an interview with the Post that the plans would help extend democracy to the workplace and ensure that employees have a say in decisions that affect their day-to-day lives.

“We can move to an economy where workers feel that they’re not just a cog in the machine—one where they have power over their jobs and can make decisions,” said the senator from Vermont. “Democracy isn’t just the opportunity to vote. What democracy really means is having control over your life.”

Peter Gowan, a policy associate at the Democracy Collaborative think tank, told the Post that Sanders “would become the first member of Congress to propose requiring corporations to create a fund of shares for their employees.”

On Twitter, Gowan noted that “inclusive ownership funds” of the kind Sanders is planning to unveil are extremely popular among the U.S. public.

According to a survey conducted by the Democracy Collaborative in partnership with YouGov, 55 percent of respondents said they would support “a policy requiring companies with over 250 employees to put 10 percent of their shares into a workers fund, which would pay dividends out to the company’s employees.”

Gowan pointed out that Americans also favor giving workers a share of seats on corporate boards of directors, a plan known as codetermination.

Sanders did not offer specifics on his codetermination plan. Sen. Elizabeth Warren (D-Mass.), also a 2020 presidential hopeful, introduced legislation last August that give workers the power to elect 40 percent of corporate board members.

Joseph Blasi, director of the Rutgers University Institute for the Study of Employee Ownership and Profit Sharing, told the Post that as wages remain largely stagnant, “looking at employee ownership and profit-sharing is a compelling way for the middle class to get a share of the benefits of ownership.”

On top of his forthcoming policy proposals, Sanders reintroduced legislation Friday designed “to increase the percentage of the American workforce in ’employee-owned’ ownership models,” the Post reported.

In a statement after introducing the WORK Act and the U.S. Employee Ownership Bank Act last year, Sanders said “we must invest in creating worker-owned companies” rather than “giving huge tax breaks to corporations who shut down in the United States and send jobs abroad to low wage countries.”

“Employee-owned companies will not provide starvation wages to workers and huge compensation packages to CEOs. They will not allow for unsafe working conditions,” said Sanders. “In fact, study after study has shown that employee ownership increases employment, increases sales and increases wages in the United States.”

MCDONALD’S WORKERS, PUSHING for higher wages and an end to workplace abuses, picketed Thursday outside franchises across the country. In an unusual twist, they were joined by volunteers from the presidential campaign of Bernie Sanders.

It was the campaign’s second bout of activist intervention in as many weeks, as campaign supporters had previously joined a picket line with University of California workers locked in negotiations with their bosses.

It’s common for a politician to make a brief appearance on a picket line to show solidarity with a cause, but it’s practically unheard for a campaign to divert its own volunteers away from the mission of electing its candidate. This act of activism flows directly from the bottom-up approach taken by the 2020 Sanders campaign, which is not just in stark contrast to every other presidential campaign: It’s also a sharp reversal from the approach taken by the leadership of the 2016 Sanders campaign.

Folks like Trent were willing to try things that campaign veterans would have laughed off the whiteboard.

For all its revolutionary sensibility, the 2016 campaign was organized around a traditional strategic approach: Raise money to put ads on television and fund a field operation in key early states.

But outside of the watch of the campaign’s top brass, a collection of activists working in the bowels of the campaign tested out a variety of experimental approaches to organizing, eventually producing a breakthrough that has been copied by organizers in Spain and the U.K.; helped elect Alexandria Ocasio-Cortez to Congress; and is now guiding Sanders’s 2020 campaign. Sanders built this movement, however, largely by accident.

Throughout his career, Sanders resisted hiring any more campaign or even congressional staff than absolutely necessary — and oftentimes less than that. Part of it was philosophical: Sanders for decades believed that staff were inherently corrupting of a politician, more likely to push him toward party orthodoxy, and undermine the iconoclastic independence he had nurtured.

His 2016 presidential campaign was no different — in part because nobody who wanted a future in Democratic Party politics thought they’d survive coming near his challenge to Hillary Clinton. Jeff Weaver, who left Sanders’s office in 2009 to run a comic book store, came out of retirement to work as campaign manager, but few others joined the official campaign.

“You have to remember in the very beginning, it was very hard for the Bernie campaign to hire pros,” said Becky Bond, an adviser to the 2016 Sanders campaign, “because it was just very clear that you’d be totally blackballed, not just from a White House or a federal agency job, but from any of the Democratic-aligned institutions. Even vendors who weren’t employed by the Clinton campaign didn’t want to work for the Bernie campaign, because they were worried about not getting business in the future.”

That meant that, by definition, the staff had to be filled out by renegades, people with activist rather than campaign backgrounds, and operatives accustomed to taking on the establishment. …

(This article was adapted from “We’ve Got People: From Jesse Jackson to Alexandria Ocasio-Cortez, the End of Big Money and the Rise of a Movement” by Ryan Grim, published by Strong Arm Press on May 28.)