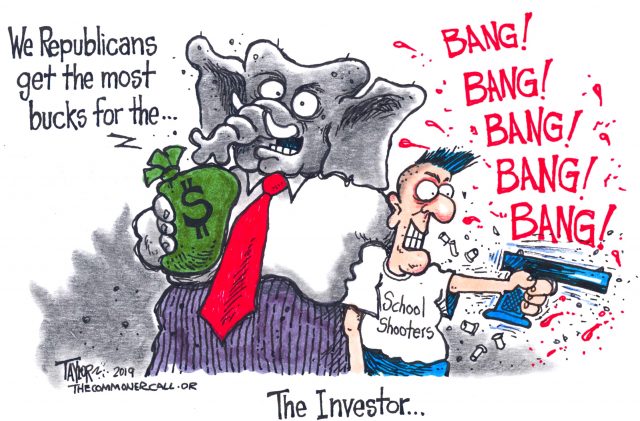 A week before former National Rifle Association President Oliver North said he would not seek reelection after a failed attempt to oust CEO Wayne LaPierre, he warned the group that extraordinary legal fees threaten the future of the NRA.

A series of documents posted anonymously online and verified by both The Daily Beast and The Wall Street Journal show the inner machinations of a group plagued by deep financial troubles to the tune of $24 million.

In a letter North and NRA official Richard Childress sent to top NRA officials last month, North said he was “deeply concerned about the extraordinary legal fees the NRA has incurred” from attorney Bill Brewer.

“The amount appears to be approximately $24 million over a 13-month period,” the nine-page letter, which has been viewed by HuffPost, said. North said the gun group was burning nearly $100,000 every day, “seven days a week, every day of every month,” on paying the law firm.

“The Brewer invoices are draining NRA cash at a mindboggling speed,” the letter said.

LaPierre, meanwhile, billed the group’s ad agency Ackerman McQueen for more than half a million dollars over the years, letters show. His purchases included a $39,000 shopping spree at a Beverly Hills store. From The Wall Street Journal.

“The other letter asked Mr. LaPierre for detailed records backing up $267,460.53 of travel and rent expenses that Mr. LaPierre billed to Ackerman, which said it in turn billed to the NRA.

“They included a trip to Italy and Budapest in 2014, where the listed expenses included $6,500 for lodging at the Four Seasons hotel; $2,400 for a stay at the luxury Castadiva Resort on Italy’s Lake Como; $17,550 for “Air Charter” between Budapest and the Italian city of Brescia; and nearly $18,300 for a car and driver in both countries. …”

Turmoil continues at the National Rifle Association (NRA) after the far-right political organization was caught spending $274,695.03 at a high-end fashion boutique on clothing for CEO Wayne LaPierre. A leaked memo from the NRA’s chief financial officer, William Winkler, asks LaPierre for “immediate attention.”

“During the recent audit sequence, specifically with FRA, transactions with related parties were discussed,” Winkler wrote. “We realized during these discussions that we need to address your wardrobe you required us to provide, specifically, purchases at the Zegna store in Beverly Hills, CA.”

In the USA, right-wing groups such as the National Rifle Association interpret the Second Amendment of the US Constitution as permitting any individual to own weapons. Historian Roxanne Dunbar-Ortiz, author of Loaded: A Disarming History of the Second Amendment, tells Chris Hedges that 2A has more to do with white supremacy and the subjugation of Indigenous people, African-Americans and immigrants than the individual right to have a gun.