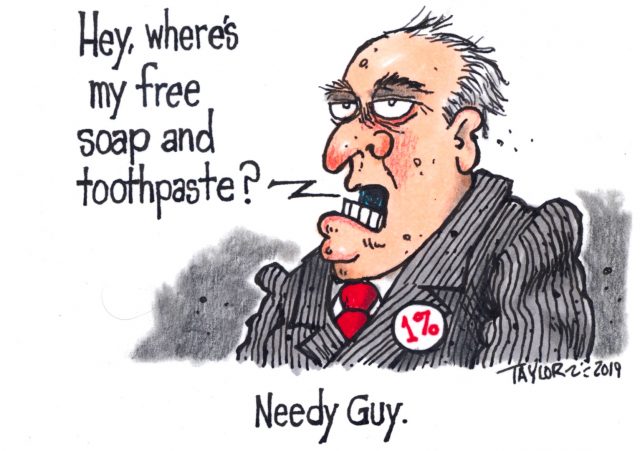 The important thing that this whiny article completely ignores is that American billionaires and corporations are enjoying the biggest tax cuts they have ever had amidst the highest profits they have ever scammed.

Sure, kids have it tough in America, but damnit we have a tiny band of entitled super rich to support and engorge.  Downer libtard pity party articles like this take the giddiness away from all the good news about our oligarchy.

Kids In America Are Missing School Because They Can’t Afford Soap, Toothpaste & Tampons

We’ve had an increase in families losing their housing, doubled or even tripled up in a household. It’s been pretty drastic and very challenging [for students] if they’ve lost their housing or have a long commute into school.”

For the past three school years, Helms, an English teacher at Horace Maynard Middle School in Maynardville, Tennessee, has stocked a “hygiene closet” with personal care items donated for students from low-income families by fellow teachers, current and former Horace Maynard parents, and members of the community. Helms uses cash donations to buy supplies at the dollar store. Her parents gave her the cabinet.

“I noticed certain kids being picked on for not being well groomed, and I felt that many children were just too shy to go to an adult and ask for help with the items they needed,” Helms told HuffPost. She could see how it eroded their self-esteem when their classmates commented on their appearance or body odor.

Once a month, Helms pulls toothpaste, tampons and other toiletries — including “random donations,” such as hairbrushes, combs, body spray and lip balm — from the hygiene cabinet and packs them into plastic grocery bags for 14 girls and 17 boys. …

Parents at a San Francisco elementary school are rallying around a second-grade teacher after finding out that state law requires her to pay for her own substitute while she’s on medical leave with breast cancer.

Some local parents, teachers and lawmakers are now questioning whether the 1970s-era policy needs to change.

“She’s an incredible teacher and that’s not fair,” Glen Park Elementary School parent Elia Hernandez told ABC 7 Bay Area about the teacher, who has requested anonymity to protect her privacy.

California state Sen. Connie Leyva (D) told NBC Bay Area she’s interested in reviewing the law. “Candidly, I think that times have changed and it’s our job to change with the times,” she said.

In the early 1970s, California lawmakers passed a law requiring school districts to deduct substitutes’ pay from the salaries of teachers on sick leave, KQED reports. California teachers don’t pay into the state’s disability insurance program, which means they can’t draw from those funds. …

Do We Americans Hate Children? Sure Looks Like It

The school district in Warwick, Rhode Island, has decided to publicly humiliate and punish schoolchildren who have fallen behind in paying the district for their lunch. Those who owe the district lunch money will, from now on, only be given a butter and jelly sandwich until they pay up. How much do we Americans hate children? It’s not just that we force millions of them to live in poverty, or be denied adequate health care, or are leaving them a world without polar ice caps. We also like to shame them and starve them in the lunchroom.

Then There Is This…

Mother Whose Son Was Gunned Down By Police Donates $8,000 To Settle Cafeteria Debt Of Graduating Seniors

The gift from a foundation created in the name of the police shooting victim comes amid national debate over shaming poor students in public schools for unpaid lunch bills.

She presented the donation on behalf of a foundation she created in honor of her son, Philando Castile, a black 32-year-old who was a beloved cafeteria supervisor in Minnesota. He was killed in July 2016 during a traffic stop in St. Anthony, Minnesota. The police officer who shot him was acquitted, but the city later paid a $3 million settlement to his family amid protests enflamed by a viral video taken by Castile’s girlfriend as he was dying.

The Robbinsdale Area Schools, which includes https://www.huffpost.com/entry/philando-castile-mother-lunch-donation-minnesota_n_5cd5970ee4b0796a95daf3f6Cooper High, said in a statement last month that the donation from the Philando Castile Relief Foundation, created with the family’s settlement, reduced the school’s lunch debt by covering unpaid balances for about 100 seniors enrolled in a program that provides free and reduced-priced meals at the school. Some of those students may have had a balance accrue before qualifying for the program, the statement added. …