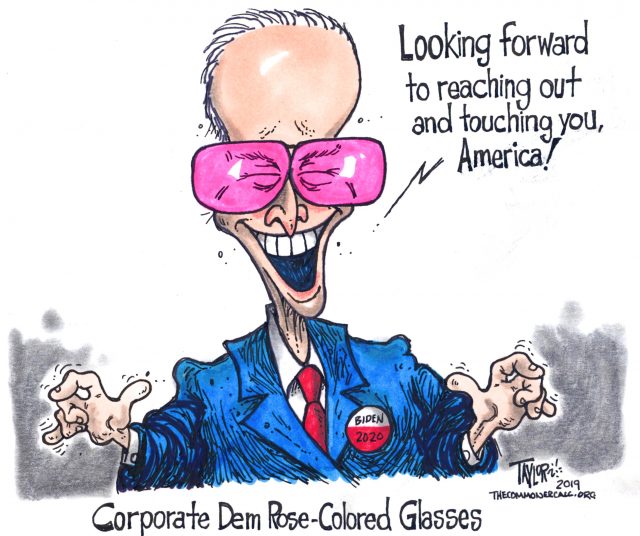 Biden’s hardly the first politician to don rose-colored glasses when looking upon American history, but few Democrats wear them so regularly as he does today.

Joe Biden officially kicked off his long-expected 2020 campaign on Thursday with a video featuring footage from the 2017 white supremacist march and counterprotest in Charlottesville, Virginia. In his telling of the origin story of his latest White House bid, the moment President Donald Trump said that there were “some very fine people on both sides” of that clash was when Biden realized that “we are in the battle for the soul of this nation.”

“I believe history will look back on four years of this president and all he embraces as an aberrant moment in time,” Biden says. “But if we give Donald Trump eight years in the White House, he will forever and fundamentally alter the character of this nation—who we are—and I cannot stand by and watch that happen. The core values of this nation, our standing in the world, our very democracy, everything that has made America, America, is at stake.”

Biden’s pitch is many things—emotionally compelling, politically shrewd, and a little presumptuous, among them. But it is one thing above all else: convenient.

Such a Pollyannaish view of America is hardly unique to Biden, but it is uniquely helpful to his case when running in a crowded Democratic field. Biden’s biggest liability in the primary is his long record on the national stage, much of which looks downright conservative by today’s standards.

Biden is telling many Americans who oppose Trump, particularly white ones, what they want to hear: that Trump’s election—like what happened in Virginia the following summer—was an aberration, a tumor that can be surgically excised from the body politic, and not a symptom of an underlying disease that’s been present since the nation’s birth.

The desire to reduce American history to a series of individual moments is natural, particularly for a politician, but in this case the oversimplification gives Biden the chance to choose which moments “made America, America,” and which can be brushed aside as isolated incidents uncharacteristic of that same “America.” And so when images of the women’s suffrage and civil rights movements flash on screen, Biden is asking his audience to see that progress as what defines America, rather than the centuries of disenfranchisement based on gender and race that preceded it and the racism and sexism that remain. Consider how Biden chose to begin the video …

While Biden Claims He’s The Workers’ Candidate, He Has Worked To Cut Medicare & Social Security

Former Vice President Joe Biden, who officially announced his presidential campaign on Thursday, is positioning himself as the defender of the embattled working class: giving speeches to union audiences, tapping organized labor for early support, walking the Stop & Shop picket lines, and pairing his announcement with a reportedly impending endorsement from the International Association of Firefighters, who have pledged to help him raise money.

However, an episode from the not-so-distant past cuts against this “friend of the working man” image: Biden’s leading role in the Obama administration’s 2011 efforts to slash the deficit by offering Republicans spending cuts to Medicare and Social Security.

At the time, the GOP had just finished giving then-President Obama a “shellacking” in the 2010 midterms, with a brand new majority in the House to show for it. Obama was largely focused on three things: raising the debt ceiling to avoid a looming and potentially catastrophic debt default; avoiding a government shutdown; and reaching a “grand bargain” with Republicans over spending, including to so-called entitlement programs like Social Security and Medicare that had long been in the crosshairs of the GOP and other deficit hawks.

Obama had been open about his plans to take on Social Security and Medicare, pledging to the staff of the Washington Post only a few days before his 2009 inauguration that he would “spend some political capital on this.” He tasked Biden, a veteran of congressional wheeling and dealing, with spearheading negotiations.

Biden had an ambivalent relationship with government spending. Considered in the 1980s to be one of the Democratic Party’s new “neoliberals,” Biden called then for a spending freeze on Social Security and a higher Social Security retirement age. In 1995, he cast his vote for a balanced budget constitutional amendment, despite his earlier criticisms of it. The choice was, he said, “an imperfect amendment or continued spending.” When he ran for president 12 years later, he again called for the Social Security retirement age to go up.

In journalist Bob Woodward’s 2012 book The Price of Politics, he portrays Biden during Obama’s first term eager to sacrifice Social Security and Medicare for the sake of bipartisan compromise and achieving what would be, in the eyes of Washington, a political victory. …

At a rally in Iowa, a reporter asked Warren about the battle she had with Biden in the 2000s over a law that made it more difficult for Americans to file for bankruptcy. Biden supported the law in the U.S. Senate, while Warren (who was a law professor at Harvard University at the time) vehemently opposed it. Warren is still highly critical of Biden for promoting a bill she believed favored large credit card companies over Americans who were struggling financially—and she reiterated her criticisms on Thursday, telling the reporter she “got in that fight because” Americans who were hurting financially “just didn’t have anyone, and Joe Biden was on the side of the credit card companies.  It’s all a matter of public record.”

In a blistering May 20, 2002 op-ed for the New York Times, Warren attacked Biden for adding abortion protections to that bill and asserted that doing so was a cheap political stunt….

The Real News (4/28/19)
Joe Biden announced his campaign for the Democratic nomination with waves of patriotic “Stop Trump to save America” propaganda. However, representing the headquarters of most credit card companies, Biden defended their interests more than those of ordinary citizens. Norman Solomon and Jacqueline Luqman examine his campaign strategy Subscribe to our page and support our work at https://therealnews.com/donate.
Link to 16-Minute Video