‘The Socialist Manifesto’ is both a warning and guide to the struggles ahead.

Tucked away in a corner in the permanent exhibition of the Deutsches Historisches Museum in what is now the heart of reunified Berlin, a humble placard captures one of the greatest tragedies of the 20th Century Left: The fall of the Weimar Republic in the early 1930s.

Fresh from the annual Liebknecht-Luxemburg demonstration commemorating the murders of two of socialism’s most beloved martyrs—Karl Liebknecht and Rosa Luxemburg—I spent a few hours lingering among the cases of posters and memorabilia from the short-lived egalitarian and democratic Weimar Republic, which stood from 1918 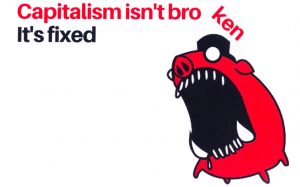 As we have seen from history, having a common enemy is not enough. To change the world, leftists need a shared vision of how to move forward once capitalism has been vanquished.

to its dissolution in 1933. In reflecting on the interwar German economy and its struggles against the combined effects of the global Great Depression and the punitive terms of the Treaty of Versailles, the museum’s curators documented the rise of the National Socialist German Workers’ Party (NSDAP)—the Nazis—and lamented the lack of unity that could have prevented Hitler’s rule:

“The radical Left blamed the economic and social misery on the governingbourgeoisie and the ruling financial capital. To combat these alleged causes of the global economic crisis, the German Communist Party (KPD) trumpeted the end of capitalism and the immediate beginning of the longed-for world revolution. Politically, the KPD profited from the depression and was continually able to increase its membership….

“…The KPD accused the SPD [Social Democratic Party] of betraying the labour movement and on May 1929 proclaimed war on the social fascism of the SPD as one of their primary political goals. At the beginning of the thirties the bitter division in the labor movement hindered the formation of a united Red Front, which members of both parties had called for from time to time against the up-and-coming NSDAP.”

In these two short paragraphs, the custodians of Germany’s official history placed the blame for Hitler’s rise on the persistent disunity of the communists and social democrats, whose internecine squabbles blinded them to the potential power of the far right.

With socialist ideas now resurgent in the United States, and parts of Europe, Bhaskar Sunkara’s timely and lucid new book is a necessary reflection on the mistakes of the past and a clarion call for future solidarity.

The Socialist Manifesto: The Case for Radical Politics in an Era of Extreme Inequality is an exciting and accessible text for young socialists attempting to forge a new political path into the 21st Century. In this short volume, Sunkara—founder and editor of the socialist publication Jacobin—provides a crash course on the history of global socialism. Through a handful of concise overviews of previous political and economic movements in Germany, Sweden, the Soviet Union, China and the United States, Sunkara navigates a path between the brutal failures of authoritarianism and the often flaccid and easily reversed gains of social democracy.

Sunkara begins his narrative with a fanciful description of the life of a factory worker laboring in Jon Bon Jovi’s family business in New Jersey bottling “Classic Curry” pasta sauce. Suddenly, the Garden State becomes the epicenter of a left-populist movement led by none other than everyone’s working-class hero, Bruce Springsteen. …