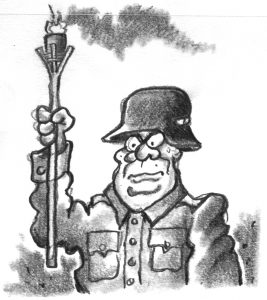 A Washington state Republican politician took part in private discussions with rightwing figures about carrying out surveillance, “psyops” and even violent attacks on perceived political enemies, according to chat records obtained by the Guardian.

State representative Matt Shea, who represents Spokane Valley in the Washington state house, participated in the chats with three other men. All of the men used screen aliases – Shea’s was “Verum Bellator”, Latin for true warrior. The Guardian confirmed the identity of those in the chat by cross-checking phone numbers attached to the Signal accounts.

He has associated with conspiracy-minded far-right groups, and later this month will emcee a dinner for the anti-communist John Birch society in Couer D’Alene, Idaho.

The group included Jack Robertson, who broadcasts a far-right radio show, Radio Free Redoubt, under the alias “John Jacob Schmidt”. The chat also included Anthony Bosworth, whose history includes a public altercationwith his own daughter and bringing guns to a court house. Bosworth participated in the 2016 occupation of the Malheur national wildlife refuge, reportedly at Shea’s request.

The name of another participant, who provided the chat records to the Guardian, has been withheld due to concerns about personal safety.

The chats on the messaging app Signal took place in the days leading up to a supposed “Antifa revolt” on 4 November 2017. Throughout late October, far-right media outlets had been stoking fears of political conflict on the basis of planned peaceful protests by a small leftist group.

The men proposed to confront leftists – whom they repeatedly refer to as “communists” and “Antifa” – with a suite of tactics, including violence. …