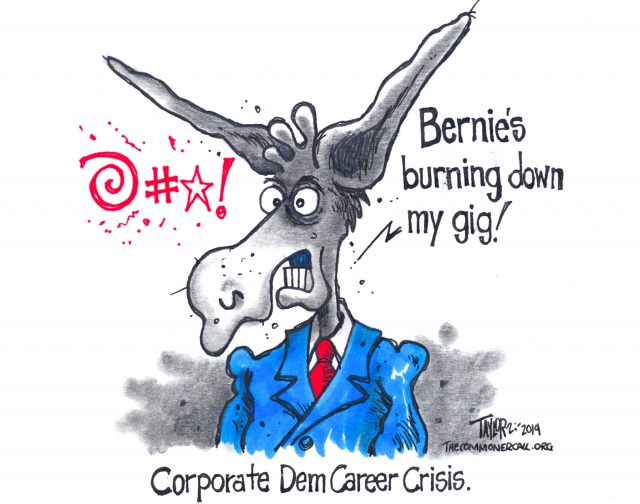 “Being loathed and feared by the rich is a big reason why Bernie is so appealing, and Democrats who don’t understand this by now will never get it.”

Sen. Bernie Sanders’ 2020 presidential campaign is rapidly gaining momentum early in the primary fight, and corporate Democrats are reportedly starting to get nervous.

The New York Times reported Tuesday that political operative David Brock has discussed launching “an anti-Sanders campaign” with other Democratic strategists and “believes it should commence ‘sooner rather than later.'”

“[T]he Bernie question comes up in every fundraising meeting I do,” Brock said.

“They hate everything our political revolution embodies,” wrote Shakir. “They hate Medicare for All, the Green New Deal, breaking up big banks, free public college for all.”

Brock, a former Republican “media hitman,” is just one of many prominent Democratic operatives and deep-pocketed donors who are “agonizing” over the possibility of the Vermont senator becoming the Democratic presidential nominee, according to the Times.

Steven Rattner, a Wall Street financer who served as head of Obama’s Auto Task Force, told the Times that Sanders is discussed “endlessly” among his circle of wealthy Democratic benefactors.

“From canapé-filled fundraisers on the coasts to the cloakrooms of Washington, mainstream Democrats are increasingly worried that their effort to defeat President Trump in 2020 could be complicated by Mr. Sanders,” the Times reported.

“The matter of What To Do About Bernie and the larger imperative of party unity has, for example, hovered over a series of previously undisclosed Democratic dinners in New York and Washington organized by the longtime party financier Bernard Schwartz. The gatherings have included scores from the moderate or center-left wing of the party, including Speaker Nancy Pelosi; Senator Chuck Schumer, the majority leader; former Gov. Terry McAuliffe of Virginia; Mayor Pete Buttigieg of South Bend, Ind., himself a presidential candidate; and the president of the Center for American Progress (CAP), Neera Tanden.”

The Times‘ reporting comes just days after Sanders sent a scathing letter (pdf) to CAP denouncing the organization for playing a “destructive role” in the effort to defeat Trump in 2020.

“Center for American Progress leader Neera Tanden repeatedly calls for unity while simultaneously maligning my staff and supporters and belittling progressive ideas,” Sanders wrote. “I worry that the corporate money CAP is receiving is inordinately and inappropriately influencing the role it is playing in the progressive movement.”

Sanders’ letter was prompted by a widely decried video published by ThinkProgress, CAP’s purportedly “independent” news outlet. The video accused Sanders of shifting his rhetoric on income inequality after becoming a millionaire on the back of his book sales.

In a statement Monday, Tanden said the video was “overly harsh.”

In response to the Times‘ reporting on Tuesday, Splinter‘s Libby Watson pointed out that a significant component of Sanders’ popularity among progressives lies in the fact that he is despised by the corporate donor class and the Democratic establishment.

“Being loathed and feared by the rich is a big reason why Bernie is so appealing, and Democrats who don’t understand this by now will never get it,” Watson tweeted.

Bernie Sanders Raises $18.2 Million During First 41 Rays Of His 2020 Campaign

One in five of those donors gave to Sanders for the first time, campaign manager Faiz Shakir told reporters. That total, amassed over 41 days culminating with Sunday’s quarterly deadline, means Sanders enters the second phase of the campaign with $28 million in cash-on-hand.
Sanders’ first quarter haul exceeded that of California Sen. Kamala Harris, who announced about a month earlier; she raised $12 million, her campaign said on Monday night. Pete Buttigieg, the mayor of South Bend, Indiana, took in more than $7 million, according to his team.
Sanders’ average donation clocked in at around $20. …
Read the Rest