Corporate Dems Tell AOC To Sit Down, Zip The Lip & Learn From The Real ‘Experts’… 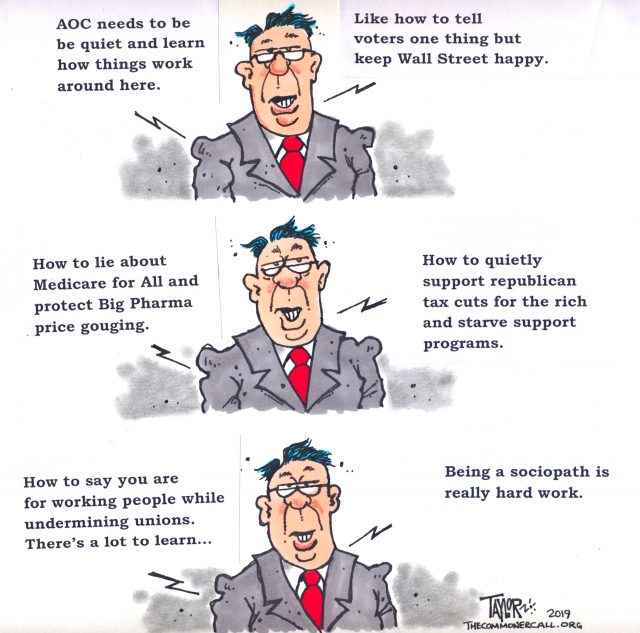 A group of GOP House members booed her on the floor, to which she replied, “Don’t hate me cause you ain’t me, fellas.”

One of the first things you learn covering American politicians is that they’re not terribly bright.

The notion that Hill denizens are brilliant 4-D chess players is pure myth, the product of too many press hagiographies of the Game Change variety and too many Hollywood fantasies like House of Cards and West Wing.

The average American politician would lose at checkers to a zoo gorilla. They’re usually in office for one reason: someone with money sent them there, often to vote yes on a key appropriation bill or two. On the other 364 days of the year, their job is to shut their yaps and approximate gravitas anytime they’re in range of C-SPAN cameras.

Too many hacks float to the capital on beds of national committee money and other donor largesse, but then — once they get behind that desk and sit between those big flags — start thinking they’re actually beloved tribunes of the people, whose opinions on all things are eagerly desired.

So they talk. What do they talk about? To the consternation of donors, all kinds of stuff. Remember Ted Stevens explaining that the Internet “is not a big truck”? How about Hank Johnson worrying that Guam would become so overpopulated it would “tip over and capsize”? How about Oklahoma Republican Jim Bridenstine noting that just because the Supreme Court rules on something, that “doesn’t necessarily mean that that’s constitutional”?

There’s a reason aides try to keep their bosses away from microphones, particularly when there’s a potential for a question of SAT-or-higher level difficulty in the interview. But the subject elected officials have the most trouble staying away from is each other.

She is there to be a pain in the ass, and it’s working. Virtually the entire spectrum of Washington officialdom has responded to her with horror and anguish.

We’ve seen this a lot in recent weeks with the ongoing freakout over newcomer Alexandria Ocasio-Cortez. Lest anyone think any of the above applies to “AOC,” who’s also had a lot to say since arriving in Washington, remember: she won in spite of the party and big donors, not because of them.

That doesn’t make anything she says inherently more or less correct. But it changes the dynamic a bit. All of AOC’s supporters sent her to Washington precisely to make noise. There isn’t a cabal of key donors standing behind her, cringing every time she talks about the Pentagon budget. She is there to be a pain in the ass, and it’s working. Virtually the entire spectrum of Washington officialdom has responded to her with horror and anguish.

The mortification on the Republican side has come more from media figures than actual elected officials. Still, there are plenty of people like Gov. Ron DeSantis (R-FL) doing things like denouncing“this girl, Alexandria Ocasio-Cortez, whatever she is” for preaching “socialism wrapped in ignorance.” A group of GOP House members booed her on the floor, to which she replied, “Don’t hate me cause you ain’t me, fellas.”

The Beltway press mostly can’t stand her. A common theme is that, as a self-proclaimed socialist, she should be roaming the halls of Rayburn and Cannon in rags or a barrel. Washington Examiner reporter Eddie Scarry tweeted a photo of her in a suit, saying she didn’t look like “a girl who struggles.”

High priest of conventional wisdom Chris Cillizza, with breathtaking predictability, penned a column comparing her to Donald Trump. He noted the social media profiles of both allow them to “end-run the so-called ‘media filter’ and deliver their preferred message… directly to supporters.”

The latter issue, of course, is the real problem most of Washington has with “AOC”: her self-generated popularity and large social media presence means she doesn’t need to ask anyone’s permission to say anything. …

(Commoner Call cartoon by Mark L. Taylor, 2019. Open source and free to use with link to www.the commonercall.org )

Gathering for the annual World Economic Forum in the Swiss Alps town of Davos, some of the world’s wealthiest business leaders and so-called “thought leaders” focused their attention Monday on a proposal that’s gaining traction in the U.S.—a return to a far higher marginal tax rate for the wealthy as a way of correcting the country’s widening wealth gap. A majority of American voters support the idea, a fact that was cited by one Davos attendee as precisely why he fears the proposal.

“It’s scary,” Scott Minerd, head of the $265 billion investment firm Guggenheim Partners, told CNBC of Rep. Alexandria Ocasio-Cortez’s (D-N.Y.) proposal of a 70 percent tax rate for income over $10 million per year, predicting that the idea will likely continue to get more of the the attention it’s captured over the past three weeks, since the freshman congresswoman mentioned it in an interview with “60 Minutes.”

“This is going to gain more momentum,” said Minerd. “And I think the likelihood that a 70 percent tax rate, or something like that, becomes policy is actually very real.”

Another attendee, Blackstone CEO Stephen Schwarzman, sarcastically told CNBC that he is “wildly enthusiastic” about the tax proposal, complaining that the U.S. already has “the second most progressive tax regime in the world.”

Ocasio-Cortez herself showed little sympathy for fearful elites like Minerd and Schwarzman, tweeting her disbelief that the ultra-wealthy are publicly expressing concern over their own financial well-being while nearly half of Americans regularly struggle to afford basic monthly expenses:

“It’s wild that some people are more scared of a marginal tax rate than the fact that 40% of Americans struggle to pay for at least one basic need, like food or rent.Imagine if we focused positively, away from fear of the former toward solving the latter.”

Public polling shows Minerd has reason to be concerned. Since her “60 Minutes” appearance a poll found the 59 percent of Americans support a 70 percent tax rate for income above $10 million, including 45 percent of Republicans, and major TV networks have devoted more time to her idea.

“What kind of society do we want to live in?”

On Monday, “Late Show” host Stephen Colbert invited Ocasio-Cortez to explain that a 70 percent tax rate for the richest Americans would simply be a way to correct the “excess” that the rich have been afforded in recent decades, asking Colbert’s 3.6 million viewers, “What kind of society do we want to live in?”

Minerd is among those who have denounced Ocasio-Cortez as promoting an “extreme” solution, but the congresswoman’s case has been supported by economists like Emmanuel Saez and Gabriel Zucman, who wrote in the New York Times Tuesday, “It’s obvious that the affluent—who’ve seen their earnings boom since 1980 while their taxes fell can contribute more to the public coffers”—especially since they have in the past:

Sharply progressive taxation is an American invention: The United States was the first country in the world, in 1917—four years after the creation of the income tax—to impose tax rates as high as 67 percent on the highest incomes. When Representative Ocasio-Cortez proposes a 70 percent rate for incomes above $10 million, she is reconnecting with this American tradition. She’s reviving an ethos that Ronald Reagan successfully repressed, but that prevailed during most of the 20th century. …

David Greene talks to historian Rick Perlstein about Rep. Ocasio-Cortez’s rising prominence in the Democratic Party. Her commitment to ideology over process puts her at odds with some Democrats.