[Editor’s Note: Also check out why David Sorota warns that if the dems nominate and elect another smooth talking pro-corporate Obama clone many people will die. — Mark L. Taylor]

In recent weeks, investigative journalist David Sirota made the repeated fatal error of doing his job. He reported facts, as his wont, and the corporate media and political elites flipped out, as is their wont.

Earlier this week, he linked to another investigative journalist’s tweet which accurately described what Biden said in a 2018 video—that he would support a means test for Social Security. In response, The Daily Banter—a website which smears anyone to the Left of the DNC, portrays harassers as victims and has a white male staff writer who lectures Nina Turner about her “ancestors” and African American history because he went to a civil rights museum once—posted a story with the expected regurgitation of a talking point used by conservatives or centrists pretending to have progressive politics: ‘Universal programs, you see, are bad, you see, because they benefit the super wealthy, you see, who don’t deserve the help.’ This hot take ignores history and common sense. Universal programs are less stigmatized and less likely to be cut when they apply to everyone. There’s a reason why the politically savvy Bill Clinton went after Welfare and not Social Security.

The attack on Sirota over Biden is just beginning but it’s the latest iteration of smearing investigative journalists for reporting inconvenient truths. Last month, when David Sirota tweeted out a simple fact about a segment of Beto O’Rourke’s donors, he was accused of launching a “seriously” dangerous war on behalf of Trump. “Oh look,” tweeted Neera Tanden, the president and CEO of the liberal(ish) think tank Center for American Progress and a close ally of Barack Obama and Hillary Clinton.  “A supporter of Bernie Sanders attacking a Democrat. This is seriously dangerous. We know Trump is in the White House and attacking Dems is doing Trump’s bidding. I hope Senator Sanders repudiates these attacks in 2019.” 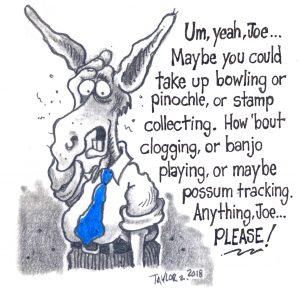 “I don’t think 500 billionaires are the reason why we’re in trouble. But we have not seen this huge concentration of wealth. And the folks at the top aren’t bad guys. I get in trouble in my party when I say wealthy Americans are just as patriotic as poor folks, I’ve found no distinction. I really haven’t. But this gap is yawning. It’s gaping and it’s having the effect of pulling us apart.”

(And, oh yeah, and according to Corporate Joe Biden, Social Security and Medicare earned benefits “need adjustment”, too.)

As is often the case, the smear began with a blatant distortion covered in a mantle of  self-righteous moralism. Why is it risky for a journalist—who writes regularly about campaign finance and the interactions between corporations and politics—to point out that the former Democratic Congressman was “the #2 recipient of oil/gas industry campaign cash in the entire Congress.”  How is stating a fact “doing Trump’ s bidding”? Why would Sanders need to condemn a journalist for reporting the truth?

Tanden is known for her compulsive tweeting. The frequency, veracity, and nocturnal nature of her tweets resemble those of another CEO and president, but she was nothing if not on-brand in her response to Sirota.  A few days later, when journalist and Texas native Elizabeth Bruenig wrote an op-ed titled, “Why this progressive Texan can’t get excited about Beto O’Rourke,” Tanden put together three critical yet fair columns—plus one factual tweet—and got: conspiracy!

She took to Twitter, as is her wont, and alleged, “Bruenig’s piece in the Post on Beto is just the latest attack by a supporter of Senator Sanders on Beto: joining Jilani, Jacobinand Sirota. Feels a bit orchestrated and clearly they are worried.” As a point of comparison, during the 2016 primary The Washington Post famously ran 16 negativepieces on Bernie Sanders in 16 hours. That feels slightly more orchestrated than a few negative articles and tweets about a congressman who has been in the headlines as a potential presidential candidate.

Several other pundits and journalists—even television writer David Simon, creator of The Wire—echoed Tanden’s bizarre framing, describing Sirota’s tweet as the start of a war on Beto and proof of an alleged coordinated smear campaign that could be traced back to Bernie Sanders.  “Inside Bernie-world’s war on Beto O’Rourke,” reported NBC. “Democrats trying to annihilate an O’Rourke Campaign,” Vanity Fair cried. Channeling his inner Borat, columnist Jonathan Chait wrote, “”Why the Bernie Movement Must Crush Beto O’Rourke,” at New York Magazine.  Meanwhile, Charles Pierce at Esquirefretted over “a concerted effort from the Bernie Sanders camp to paint O’Rourke as a tool of the oil and gas industry.” The Hill, no stranger to smear campaigns they usually aim at Sanders, reported that “Sanders supporters deny coordinated attacks on O’Rourke’s progressive credentials.”

The attacks on Sirota and his alleged co-conspirators sparked the curiosity of another investigative reporter, Alex Kotch of Sludge. Kotch looked into the story and discovered that Beto had signed a “no fossil fuel money pledge,” which states “a politician and their campaign will adopt a policy to not knowingly accept any contributions over $200” from not only PACs, but also from “executives, or front groups of fossil fuel companies—companies whose primary business is the extraction, processing, distribution, or sale of oil, gas, or coal.” O’Rourke had violated the pledge he signed. As a result of the discovery, his name was removed from the pledge website.

Meanwhile, Sirota continued with his own work as an investigative reporter, and looked into Beto’s voting record. And what he discovered was even worse: on 167 votes, O’Rourke had broken with the majority of his fellow Democrats and supported the Republican agenda not just with regard to fossil fuel (he voted against limiting offshore drilling), but with regard to healthcare (which he voted to chip away at); bank regulation (which he voted to weaken); Trump’s tax scams (one of which he voted for); the death penalty (which he voted to apply to attempts to murder a law enforcement officer);  and even immigration (when he voted to decrease screening and background checks of Customs and Border Protection agents and applicants).

In order to get to the bottom of this intrigue for my podcast, The Katie Halper Show, I spoke to David Sirota, the man who wrote the little tweet that started this great war.

You can listen to the full exchange below or read a partial transcript, edited for concision and clarity, that follows.

To hear my bonus chat with Sirota about how Tanden, Obama and the Center for America Progress opposed Beto’s votes, become a Patreon subscriber.

Link to Story and 40-Minute Audio