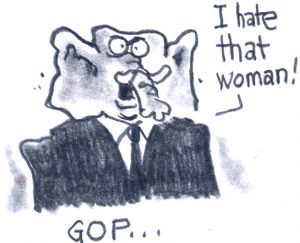 “Sure, life is about grit — hard work matters. But the rules matter too.”

In a moment of honesty, Sen. Elizabeth Warren (D-Mass.) served a huge spoon of truth to the graduates at Morgan State University, a historically Black institution as the keynote speaker at the winter commencement.

The outspoken senator told nearly 500 graduating students at MSU on Friday that their future success wasn’t just dependent on hard work — they would have to fight to “change the rules.”

“Today,” she said, “a person working for minimum wage couldn’t pay for a two-bedroom apartment in any state in America.”

“So what happened? I’ll tell you what happened: Washington changed the rules,” the senator continued. “Today, the people who set the rules worry more about Walmart’s profits than they do about how any small family will survive.”

She shifted her speech to a more dismal topic but a very necessary truth. Warren began by prefacing her speech with what she was supposed to say.

In a brutally honest moment, she stated: “Under the rules of commencement speakers, I am required to say, ‘Work hard.’ And you should,” she said. “But I’m here with a bolder message: It’s time to change the rules. Let me say that again for those in the back. Change. The. Rules.”

Warren spoke openly about the deck being stacked against Black folks, specifically with reference to race and class. Discrimination in education, housing and economic policies were mentioned. She highlighted the differences between white and Black families with respect to wealth being an unattainable goal for Blacks, therefore disallowing them to pass on a legacy of affluence and money.

“Sure, life is about grit — hard work matters. But the rules matter too,” she said.

Warren explained to the graduates, “I haven’t lived your life or experienced anything like the subtle prejudice or more overt harm that you may have experienced just because of the color of your skin. Not just individuals within the government, but the government itself — has systematically discriminated against Black people in this country.”

She also took that time to criticize current leadership and policies for undermining voting rights and “basic democratic institutions.”

At the commencement, Sen. Elizabeth Warren received an honorary doctorate. She is also considering running for president in 2020.

When asked why the senator was chosen to give the keynote speech at MSU, Morgan State University President David Wilson responded: “Sen. Warren is one of the most progressive entities on the political landscape and that her experiences and leadership are something that is sure to benefit our students as they leave this institution and begin the journey to become leaders in their own right.”

Read the Rest and 23-Minute Video