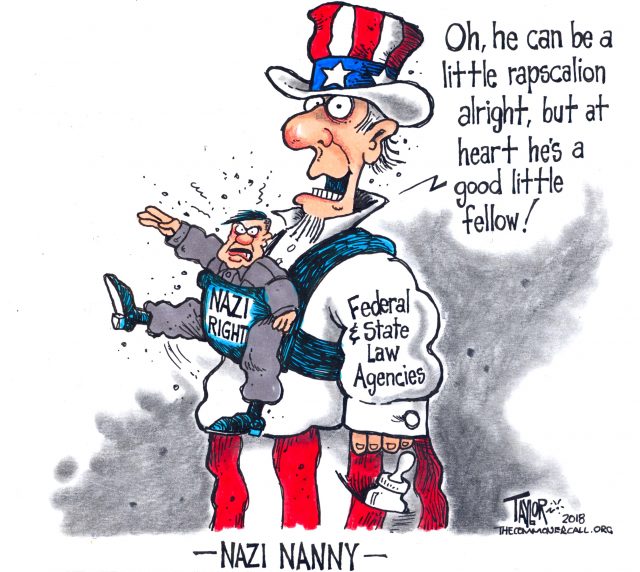 And now they have no idea how to stop it.

[Editor’s Note: This is a stunning piece of reporting on not just the ignoring of fascist organizing and violence but a deadly fostering through neglect. As Timothy Snyder notes in his book “Twenty Lessons From The Twentieth Century”, when the police and military begin to align with the fascist paramilitaries the game is over. — Mark L. Taylor]

The first indication to Lt. Dan Stout that law enforcement’s handling of white supremacy was broken came in September 2017, as he was sitting in an emergency-operations center in Gainesville, Fla., preparing for the onslaught of Hurricane Irma and watching what felt like his thousandth YouTube video of the recent violence in Charlottesville, Va. Jesus Christ, he thought, studying the footage in which crowds of angry men, who had gathered to attend or protest the Unite the Right rally, set upon one another with sticks and flagpole spears and flame throwers and God knows what else. A black man held an aerosol can, igniting the spray, and in retaliation, a white man picked up his gun, pointed it toward the black man and fired it at the ground. The Virginia state troopers, inexplicably, stood by and watched. Stout fixated on this image, wondering what kind of organizational failure had led to the debacle. He had one month to ensure that the same thing didn’t happen in Gainesville.

For two decades, domestic counterterrorism strategy has ignored the rising danger of far-right extremism. In the atmosphere of willful indifference, a virulent movement has grown and metastasized.

Before that August, Stout, a 24-year veteran of the Gainesville police force, had never heard of Richard Spencer and knew next to nothing about his self-declared alt-right movement, or of their “anti-fascist” archnemesis known as Antifa. Then, on the Monday after deadly violence in Charlottesville, in which a protester was killed when a driver plowed his car into the crowd, Stout learned to his horror that Spencer was planning a speech at the University of Florida. He spent weeks frantically trying to get up to speed, scouring far-right and anti-fascist websites and videos, each click driving him further into despair. Aside from the few white nationalists who had been identified by the media or on Twitter, Stout had no clue who most of these people were, and neither, it seemed, did anyone else in law enforcement.

There were no current intelligence reports he could find on the alt-right, the sometimes-violent fringe movement that embraces white nationalism and a range of racist positions. The state police couldn’t offer much insight. Things were equally bleak at the federal level. Whatever the F.B.I. knew (which wasn’t a lot, Stout suspected), they weren’t sharing. The Department of Homeland Security, which produced regular intelligence and threat assessments for local law enforcement, had only scant material on white supremacists, all of it vague and ultimately not much help. Local politicians, including the governor, were also in the dark. This is like a Bermuda Triangle of intelligence, Stout thought, incredulous. He reached out to their state partners. “So you’re telling us that there’s nothing? No names we can plug into the automatic license-plate readers? No players with a propensity for violence? No one you have in the system? Nothing?’’

One of those coming to Gainesville was William Fears, a 31-year-old from Houston. Fears, who online went by variations of the handle Antagonizer, was one of the most dedicated foot soldiers of the alt-right. …

The Rise Of Domestic Radical Right Wing Terrorism, And How U.S. Law Enforcement Encourages It Through Neglect

Despite repeated warnings over the past two decades, federal law enforcement officials in the United States have ignored the threat of violence from far-right extremists. Now, they have no idea how to stop it.

Tune in, and tell us what you think. Email us at thedaily@nytimes.com. Follow Michael Barbaro on Twitter: @mikiebarb.

— Timothy Snyder, 20 Lessons from the 20th Century on How to Survive in Trump’s America.

Hard To Believe, But There Was Day When the Federal Government Educated Against Fascism 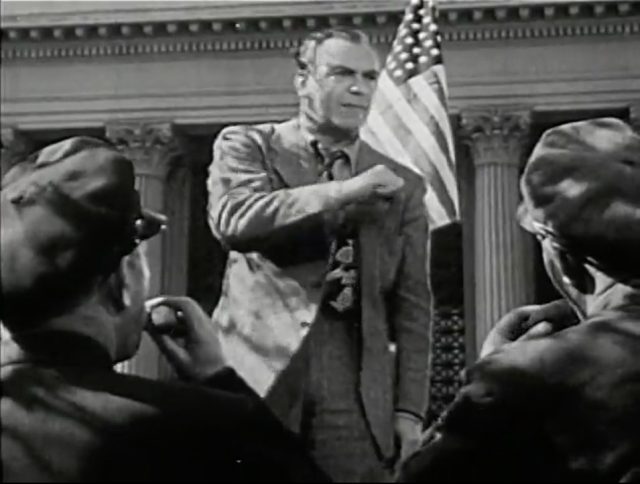 A 1947 short film entitles “Don’t Be A Sucker” warned about fascism taking root in America. It’s starts off dated and quaint, but turns into a moving monologue that’s disturbingly timely today.