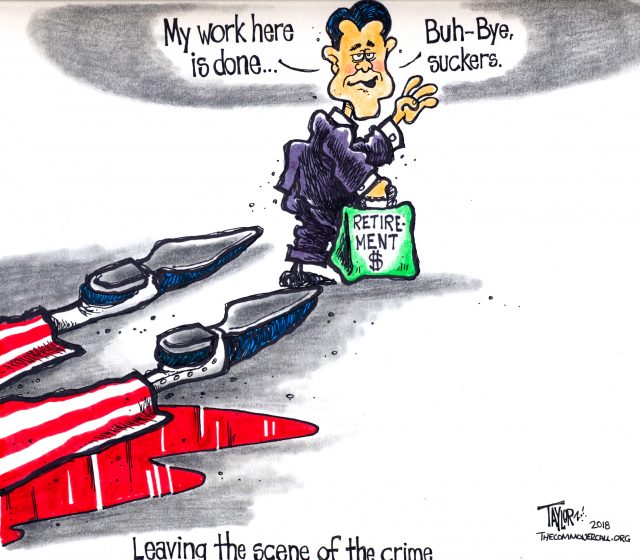 “The charade’s up. Good riddance.”

As House Speaker Paul Ryan (R-Wis.) delivered his farewell address on Wednesday after 20 years of relentlessly working to gut social programs for the poor and successfully ramming through “one of the biggest transfers of wealth to the richest one percent in U.S. history,” progressives made sure to let the outgoing congressman know what they think of his legacy.

With the hashtag #GoodRiddanceRyan, progressive advocacy groups and commentators denounced Ryan for spending his 10-term tenure in the House pushing an agenda that rewards wealthy corporate donors at the expense of the American working class.

“He’s a coward who sold our economy to the highest bidders,” declared Patriotic Millionaires.

“Speaker Ryan will always be remembered for rigging the system to prioritize the wealthy and big corporations’ greed over working families’ needs.”

Americans for Tax Fairness echoed this assessment of Ryan’s career, writing, “So long to a Speaker who has deliberately chosen to throw white, black, and brown families under the bus so the wealthy, big corporations, and his donors can receive massive tax cuts.”

While the congressman’s speech was mostly light on substance and littered with motivational platitudes—”always dream big” and “always raise your gaze”—Ryan’s speech eventually turned to the subject of “entitlement reform”—the right-wing euphemism for slashing Medicare, Medicaid, and Social Security.

Ryan expressed deep regret that he and his party ultimately failed to gut these programs, which provide a lifeline for millions of Americans. The Wisconsin congressman has previously said he’s been dreaming of cutting Medicaid since he was “drinking out of a keg” in college, and during his speech on Wednesday he described “entitlement reform” as his party’s “greatest unfinished business.”

“Speaker Ryan will always be remembered for rigging the system to prioritize the wealthy and big corporations’ greed over working families’ needs,” concludedAmericans for Tax Fairness.

Ryan’s final goodbye speech to Congress came after the House Speaker’s office aggressively promoted a revisionist “docu-series” that portrayed his crowning achievement—a deeply unpopular $1.5 trillion tax bill—as a historic victory for ordinary Americans, despite the mountains of evidence to the contrary.

“Paul Ryan does not deserve the courtesy of this kind of rose-colored glasses treatment,” GQ‘s Jay Willis wrote of Ryan’s documentary. “He is a political opportunist who spent two disgraceful years tolerating Donald Trump’s corruption and enabling Donald Trump’s malevolence, because he knew it was his best chance to enact a policy that enjoyed the support of his megadonors and no one else.”

“We should remember this speaker as he’s asked to be remembered: a man who insisted on celebrating his favorite failure because it qualified as his greatest accomplishment,” Willis concluded.

In a piece for Inequality.org ahead of Ryan’s farewell ceremony on Wednesday, Negin Owliaei, a researcher at the Institute for Policy Studies, wrote that “in 2018, as a politics of cruelty becomes more and more commonplace, we owe it to ourselves to be honest about the true intentions of Paul Ryan and the people like him who mask their ill intentions with wonky language.”

(Commoner Call cartoon by Mark l. Taylor, 2018. Open source and free for non-derivative use with link to www.thecommonercall.org )