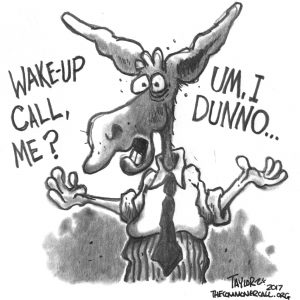 You don’t need to look far to see and hear a lot of people asking, “just what do Democrats stand for?” Why is this so often the case? I propose that it’s because they are relying on a strategy that is based on a fundamentally flawed premise.

The post mid-term election message from Democrats nationwide who failed to take back state legislatures was consistent with that coming out of my home state of Wisconsin – if it weren’t for unfair redistricting maps drawn to benefit Republicans in 2011, Democrats would have won back the state legislature. I propose that not only does the data not bear that out, but adhering to this flawed supposition is avoiding the more pressing question for Democrats – how can they win back the state legislature? If they think they can rely on “fairer maps” drawn by a court in 2021, they might be deluding themselves, and failing to address an enormous strategic problem that has been emerging for decades. Further, the weak responses by Democratic leaders to radical, selfish power grabs by a GOP that lost statewide races in Wisconsin and Michigan fail to address WHY these power grabs are immoral acts against government of, by, and for the people. Wisconsin has always been a national progressive leader – it’s possible it could be once again, and provide a model for other states.

It’s been eight years since Wisconsin Republicans won all three branches of government (with much fairer maps than exist today), and initiated an unprecedented assault on the values of caring for our fellow Wisconsinites through our democracy and government. Instead, the Badger State has endured a legislature more concerned with consolidating political power and promoting their own self-interest (and the self-interest of a few of their wealthy donors) than serving all the people of the state through our government. It’s been seven years since the GOP-friendly redistricting maps were enacted. Since that time, state party Democrats have made little progress in terms of a strategy to effectively counter GOP gains statewide. In fact, it seems like the DPW strategy is more of a “wait until the demographics shift to our favor” instead of a realistic, hard look at their strategic shortcomings.

What really went on had more to do with Republican voters not being thrilled about Scott Walker, than people flipping from Republican to Democrat. Democrats turned out in huge numbers in the urban strongholds, and some of Walker’s strongholds were less enthusiastic. While this worked for winning statewide, it won’t work as a strategy to win a statewide legislature.

The voting trends by county statewide are good evidence of how little headway Democrats are making outside of their existing strongholds in Milwaukee and Dane County. Extraordinary turnout situations as happened in November, in Milwaukee and Dane Counties, show how Democrats can win statewide seats. But counter that big Dem turnout in a GOP-enthusiastic Presidential year, and that 1.1% margin disappears. Further, basing a statewide election strategy on winning the two big, urban counties only serves to reinforce the GOP “Democrats only care about Madison and Milwaukee” message. It continues to alienate the rest of the state. And you can’t win back the State Legislature by only winning in those two counties. Thanks to Charles Franklin for putting these figures together.

Looking at the overall Midterm shift from county-to-county, at face value, would seemingly provide Democrats with hope. Looking at Southeastern Wisconsin, one would think that Democrats could have won back the legislature, if only there were “fairer” districts:

Sure, that looks like a lot of blue in the Southeast part of the state. In the context of the legislature, consider that many of the counties showing a relatively small (2-4%) shift are reliably Republican-voting counties, often by 20 points or more. Even Waukesha County, which showed a big shift (10-14%) shift to Democratic, still went to Walker by over 30 points (instead of the usual 40+). Some of the Northern and Western Wisconsin Counties that voted for Evers even showed GOP gains (like LaCrosse and Ashland/Bayfield). What really went on had more to do with Republican voters not being thrilled about Scott Walker, than people flipping from Republican to Democrat. Democrats turned out in huge numbers in the urban strongholds, and some of Walker’s strongholds were less enthusiastic. While this worked for winning statewide, it won’t work as a strategy to win a statewide legislature. The following figures are good evidence.

Showing the vote density in Milwaukee and Dane provides perspective as to the ability to win a statewide election, while losing the legislature. Especially when enthusiasm is relatively low for your opponent …