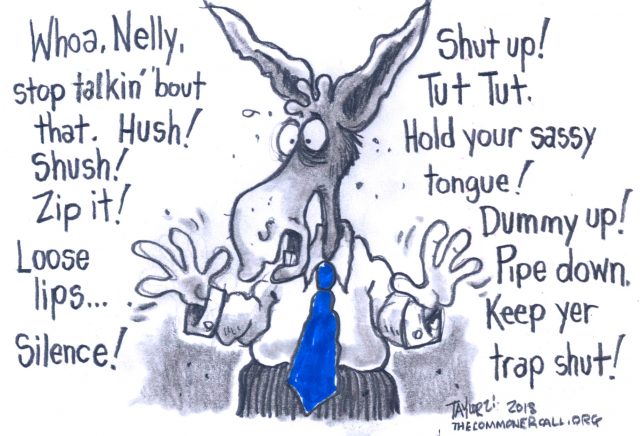 Turns out that Blue Wave had some corporate floaters.

Dozens of Democrats ran for House seats in the 2018 cycle on pledges to reject corporate PAC money and instead rely on smaller donors to fund their campaigns. But a Sludge review of campaign finance records shows that a majority of those Democrats took campaign contributions from a PAC affiliated with the New Democrat Coalition, which itself was funded by more than $2.4 million in contributions from PACs in the last cycle, including PACs affiliated with nearly every major American corporation.

The New Democrat Coalition is a group of 68 centrist, pro-business House Democrats, which describes itself as being “committed to pro-economic growth, pro-innovation, and fiscally responsible policies.” The group was founded in 1997 as an affiliate of the Democratic Leadership Council, a now-defunct nonprofit that worked to shift the Democratic party away from populist, left-wing policies and towards a more business-friendly, Clintonian agenda. The current Chair of the New Democrat Coalition is Jim Himes (D-Ct.), a Wall Street-friendly representative who worked as an investment banker at Goldman Sachs for more than a decade and has supported bills to deregulate the financial industry.

Of the 30 new House membersof the New Democrat Coalition, few have issued public press releases announcing their affiliation, and the organization’s press release contains no quotes of testimonial from newly-elected representatives.

In 2013, the New Democrat Coalition established a political action committee, the NewDemPAC, to help re-elect members of their caucus and elect new like-minded Democrats they believe will help them further their agenda. The NewDemPAC is funded by contributions from the campaign committees of New Democrat Coalition members, but also by millions in contributions each cycle from the PACs of major U.S. corporations and their trade associations, including Comcast, General Electric, JPMorgan Chase, Exxon Mobil, Goldman Sachs, Pfizer and hundreds more.

Twenty of the 30 newly-elected Democrats who pledged to reject corporate cash took campaign contributions from the corporate-funded NewDemPAC, Sludge’s review of campaign contributions records found. In addition, 25 of them were recently inducted into the New Democrat Coalition, giving the group more members than it has had in years and helping to further its business-friendly agenda in the 116th Congress.

In the past, the New Democrat Coalition has fought to weaken regulation of financial derivatives in the wake of the 2008-08 financial crisis, supported the Trans-Pacific Partnership free-trade package, and helped the biotech industry win patent extensions for biosimilar drugs, among many other pro-business policies. They have been critical of progressives like Bernie Sanders who they say focus too much on income inequality and not enough on economic growth. …